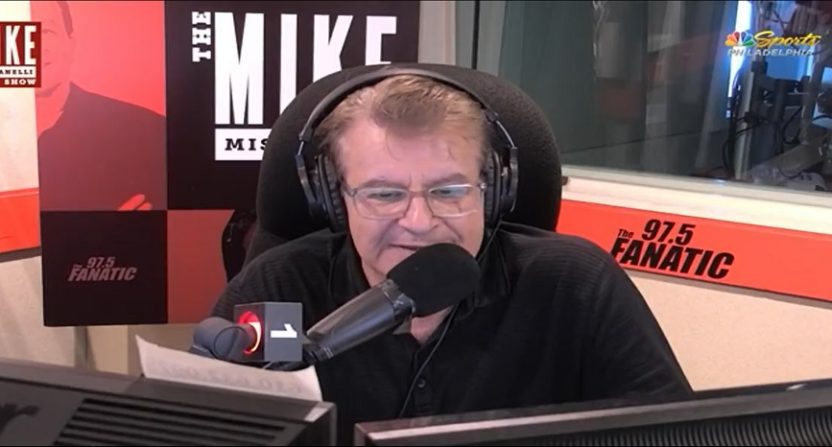 On Tuesday’s episode of The Mike Missanelli Show, Missanelli himself dropped a bombshell: he was leaving his show on 97.5 The Fanatic, following his Tuesday show.

“This is my last day”

Mike and the company have decided to go in another direction. pic.twitter.com/avFt681y2y

Mike Missanelli is OUT at 97.5 The Fanatic! Mike announced just minutes ago that his contract is set to expire in a few weeks. He and the station have agreed to part ways. pic.twitter.com/t6fsgoWLcR

During his announcement, Missanelli said that his contract was nearing its end, and both himself and the company decided it would be best to go in another direction (though Missanelli remaining on in another role has been discussed). He also said that the station had a replacement show already lined up.

For now, the NBC Sports Philadelphia simulcast of the show will continue, per Rob Tornoe of the Philadelphia Inquirer.

At least for right now, NBC Sports Philadelphia will continue to simulcast the show, according to a source at the network.

Missanelli has been a fixture in Philly sports talk radio and, as is standard when it comes to sports talk, has been no stranger to controversy. Back in 2006, he was fired from 610 WIP after allegedly hitting a producer. In 2017, he lost a TV gig with 6ABC in Philly after criticizing female play by play announcers (specifically, Beth Mowins) and saying they sounded “unnatural.”

As for his future, Missanelli said in a January interview that he expected “to stay for a good long time” and that retirement wasn’t in the cards.