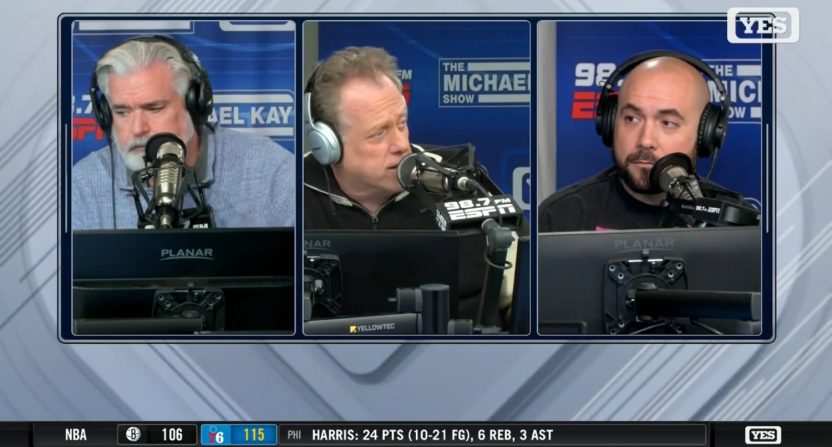 The public is privy to the contract amounts of some elite sports announcers, but The Michael Kay Show wonders if all broadcaster salaries should be out in the open.

After Michael Kay informed his 98.7 ESPN New York co-hosts Don Le Greca and Peter Rosenberg that Houston Astros players were receiving a $516,347 bonus for winning the World Series, the segment turned into a conversation about broadcaster salaries.

“That’s what? Three months’ salary for you?” La Greca joked, leaving Kay confused as to why his co-hosts would be interested in his salary.

“Because if we were baseball players, we’d all know what we make and we could all go to management and negotiate based off that information,” said La Greca. “I can’t do that. What’s different? We’re personalities, we do things publicly, we’re in competition with other radio stations. I don’t understand why you can’t just right now tell me how much you’re making. Gerrit Cole can do it. Shohei Ohtani can do it.”

To expand on that, Joe Buck, Troy Aikman, Tony Romo, Charles Barkley, Adam Schefter, and even the underpaid Stephen A. Smith can do it thanks to media reporting. Kudos to Chris “Mad Dog” Russo for being the one prominent sports media personality to share his own salary by admitting he makes a measly $10,000 every time he steps foot in ESPN’s First Take studio. So why isn’t every sports radio host and announcer open about their salary?

According to Rosenberg, the audience “would be sickened” to hear their salaries, with fans and listeners often believing talking about sports is easy and they would do it for free.

There might be an outcry, but there shouldn’t be. An announcer like Kay, who dedicates a lot of hours with his multiple jobs to help entertain hundreds of thousands of people daily, deserves to be paid generously. Despite the potential backlash of local radio listeners, Kay acknowledged there could be value in announcers mutually agreeing to be open about their salaries.

“Here’s the deal,” Kay said. “The great Scott Boras once told me, about representing broadcasters, ‘You guys are your own worst enemy.’ I asked why and he said ‘Because you don’t have a database of what you all make. So, the people that are negotiating with you, they have all the information. They know who makes what. You guys have no idea. Michael, you have no idea what Gary Cohen makes. Gary Cohen has no idea what you make.’”

Maybe we should all be open about what we make. For people in the workforce without the backing of a union, it’s hard to predict the industry standard. Knowing what other employees earn can give the worker an advantage, or at least a foundation when negotiating with current and prospective employers.