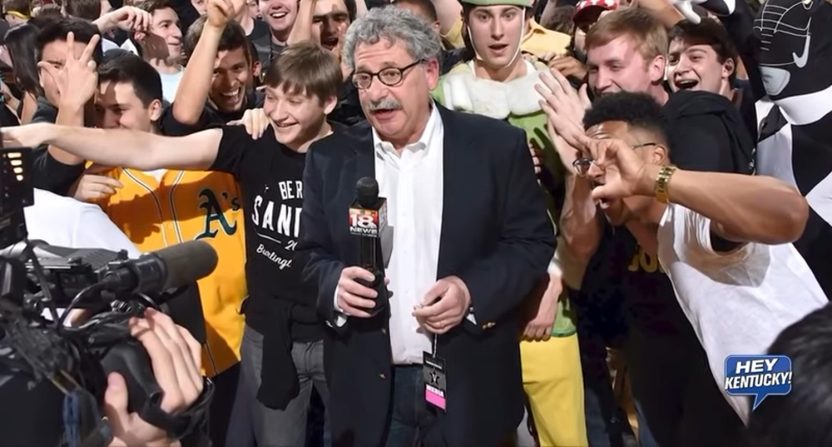 Alan Cutler was only going to come back to broadcasting on his terms. The 70-year-old grandfather and former WLEX-TV sports anchor didn’t need to work. He had been retired from the airwaves since covering the 2018 Kentucky Derby for the Lexington, Ky. station. Quite a sendoff for one of the most recognizable faces in Kentucky media.

Cutler said radio was always on his mind. But it had to be the right circumstances, the right fit. He didn’t want to work nights. He didn’t want to do a three-hour shift. He wanted plenty of time off. After turning down four previous offers from Lexington-based LM Communications, he finally said yes. Cutler made his triumphant return earlier this week. He now hosts a daily sports show on ESPN Radio affiliates WLXG-AM 1300 and FM 92.5 from noon to 2 p.m. Eastern time.

“I’m shocked this worked out,” Cutler said. “This was the fifth different time they called me. I don’t know anybody who’s gone through five times to try and put a deal together. I didn’t think it would work out. I’ve had all kinds of offers and I’m pretty stubborn. That’s breaking news. But there were things I didn’t want to do… There are three organizations in town. I’ve had multiple offers. I figured I was done.”

Credit Lynn Martin, president of LM Communications, for being persistent. Cutler is a native of Long Island, New York, but has spent the past four decades in Lexington. He’s a familiar voice to many Kentuckians.

“We are pleased to welcome Alan Cutler, who has a long history of presenting the very best in sports,” Martin said in a statement. “By bringing this legend back to local radio, we once again show that being a live and local voice lets us provide something truly unique to the sports audience in Lexington.”

Cutler has been broadcasting since 1975, working in Lexington, Cincinnati, and Pittsburgh. He was the host of the Cincinnati Bengals Radio Network for 14 years. However, he’s probably best known nationally for the famous 2009 video of him chasing Billy Gillispie. Even over a decade later, the footage remains hilarious.

The media had staked out the University of Kentucky basketball offices to find out if Gillispie was going to be fired. When Cutler spotted the coach, he questioned him. Gillispie, pretending to be on his phone, tried to dodge Cutler by walking away and then sprinting away.

Undeterred, Cutler ran after him.

The iconic moment in 2009 when Alan Cutler chased down Billy Gillispie just hours after he was fired as the head basketball coach at UK.

The former sports reporter went into great detail about this moment in episode one of the Kentucky Roots Podcast. ? pic.twitter.com/U9z14HiKdA

The video made national news. Normally that kind of attention would be welcome. However, Cutler’s bosses were outraged. WLEX had received over 1,000 emails within two hours. Most viewers were angry at Cutler for confronting Gillispie in that manner. He was accused of badgering Gillispie, who was indeed fired after going 22-14 and missing the NCAA tournament.

Cutler said that WLEX management told him he was “too aggressive,” and he was ordered to apologize. Cutler didn’t want to but feared the consequences.

“I think I would have been fired,” he said. “I’ve got a wife and two kids. You can’t do it. My only regret was apologizing for something I didn’t think was wrong. Not only that, I had to write everyone back.”

As upset as Cutler was, the video raised his profile. At his introductory press conference, John Calipari, who succeeded Gillispie, poked fun at Cutler for the chase. Calipari also gifted Cutler a pair of running shoes for his retirement.

Cutler has learned to embrace that defining moment, titling his first book Cut To The Chase! Many thought they had heard the last of Cutler as a broadcaster. But he’s back on the air.

With his name and connections, he lands guests that Lexington folks care about. He doesn’t worry much about giving opinions that might upset coaches or players. Cutler can always resume retirement.

[Screencap of Cutler following a Kentucky-Vanderbilt game in 2016 from Hey Kentucky! on YouTube]