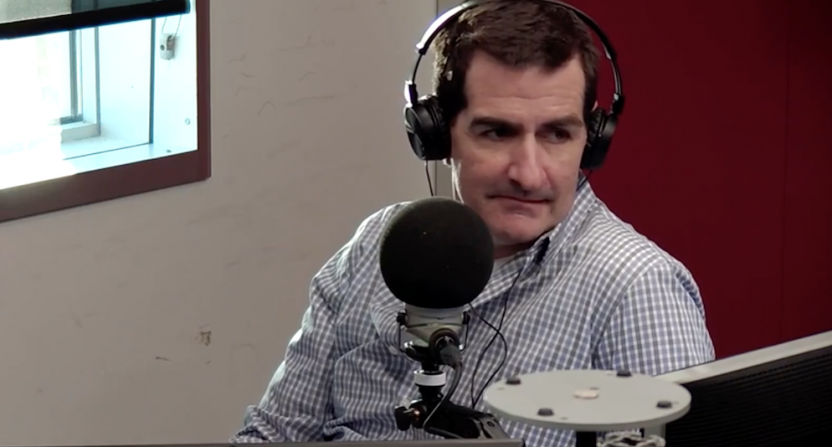 Very sad news from the Detroit sports scene where veteran radio personality Jamie Samuelsen passed away at 48 years old. Samuelsen announced during his morning show with Michael Stone on 97.1 The Ticket earlier in the week (July 27) that he had been fighting colon cancer for the past 19 months, originally diagnosed in January 2019.

Detroit News columnist Bob Wojnowski, a longtime colleague of Samuelsen’s at WDFN who then co-hosted a show with him for four years at 97.1 (WXYT-FM), let fans know of Samuelsen’s death on Twitter Saturday night.

I am so sad and sorry to pass this along, at the family's request. Jamie Samuelsen, the best damn friend you could ever have, a tremendous broadcaster on @971theticketxyt passed away tonight at 48. He was surrounded by his wonderful family, and he went peacefully.

I am heartbroken by the passing of my great longtime friend and radio partner Jamie Samuelsen. He was one of a kind. Smart, kind and had a great sense of humor. He battled this for over 19 months.I will miss him dearly. Love you always James K.

Why did Samuelsen keep the news private for so long? A cancer diagnosis isn’t an easy thing to reveal, of course, especially to a radio audience. As Samuelsen told the Detroit Free Press, he preferred to keep his diagnosis among family, close friends, and co-workers to keep his children’s lives as normal as possible.

“‘We have a 16-year-old, Caroline, a 14-year-old named Josh and an 11-year-old named Catherine,’ Samuelsen told the Free Press on Monday. ‘Obviously, all of our lives were turned upside down when we found out, but we wanted to make their lives as normal as possible. Plus, given the fact that I work in radio and my wife works in TV, I wanted to make sure it didn’t affect their lives.'”

Samuelsen’s wife, Christy McDonald, is a reporter and anchor for Detroit’s PBS TV station and contributes to the market’s public radio affiliate as well. Previously, she worked at Detroit’s ABC affiliate, WXYZ-TV.

And we fight every day. Love to everyone in this cancer fight along with us- and especially the caregivers – I see you. Thanks for supporting @JamieSamuelsen & our family. To life!

Missing a few days to treat an infection that had developed apparently compelled Samuelsen to go public. As he explained on the air, he needed sports and sports talk for a distraction, to think about something else besides his condition for at least a few hours each day.

“Each morning since my diagnosis, I got up, turned on the radio mic, and got to talk sports,” said Samuelsen on last Monday’s show. “I needed the escape from cancer, just like so many of our listeners who face hardships, grief, and illness too. They turned to us in the morning for some levity in this crazy world.

“So I wanted to continue to have fun and not let cancer get in the way of doing what I loved. Connecting with listeners, laughing, teasing Stoney, all of it, it helped me be normal while continuing to fight this disease.”

All of us in Michigan have nodded and laughed at @JamieSamuelsen’s insight and humor over the years. We are praying for you and cheering for you now, my friend. You are going to beat this. @971theticketxyt https://t.co/nEE1qXHtoG

Crushed by the passing of Jamie Samuelsen, a wonderful friend for the last 30 years. Jamie was, quite simply, one of the best people I know – smart, funny, caring and incredibly talented. Cancer is so cruel and unfair. Please keep Jamie in your thoughts. I know I will. pic.twitter.com/Q1O73XHU6R

A Northwestern alum, Samuelsen first worked in Chicago. When The Last Dance aired on ESPN this past spring, he joked about being seen in archival footage of Michael Jordan’s first retirement press conference.

In 1994, Samuelsen took a job with WDFN as an update anchor. During those early days, colleagues teased him about the size of his head, though also admired his strong radio voice. Few might have guessed, including Samuelsen himself, that would be the beginning of a 25-year career on Detroit radio and television.

Listeners often ribbed him about his Chicago background and admiration of Jordan, whose Bulls were a fierce rival of the Detroit Pistons. Growing up in the Bay Area, he also often talked about his love for the San Francisco Giants. Samuelsen’s email handle was “JamSam22,” the number of his favorite player, Will Clark.

Praying for the loved ones of longtime Detroit sportscaster Jamie Samuelsen. We came up in the business together at WDFN 25 years ago. Devastated to hear of his passing.

Within a year, Samuelsen took over hosting the midday show. Eventually, Gregg Henson joined him and the duo soon moved to mornings.

I still can't believe JB is gone, I never thought I'd ever hear the word that he had passed. This isn't suppose to happen to a person like Jamie or his family. Awful beyond words and I am grateful he was in my life.

Jamie truly made people around him better. We sometimes fought like brothers about sports, but he always had my respect and admiration. Always will!

Truly, not getting to work daily w/ Jamie Samuelsen is the one professional disappointment I've never truly gotten over. Everything else has been easy in comparison. And I loved him immensely as a friend.

Samuelsen continued to host WDFN’s morning show with Greg Brady after Henson moved on to WXYT. However, he was let go by WDFN in 2007 and proceeded to work on morning programs at Detroit FM rock stations WRIF and WCSX. Even if you didn’t listen to an all-sports station in metro Detroit, there was a good chance you heard Samuelsen talk sports.

But Samuelsen returned to sports talk on 97.1 in 2012, first doing an evening show with Wojnowski then joining Stone on mornings, where he’d been for the past four years.

One of the greatest athletes on the planet. Pictured along with Chiefs QB Patrick Mahomes. pic.twitter.com/ltGu1TsEOD

Additionally, he wrote regular columns for the Detroit Free Press website and print edition, showing a talent and depth of opinion that many radio personalities don’t often exhibit.

On a personal note, I’ve previously written about my affection for WDFN, Detroit’s first all-sports radio station which went off the air a month ago. I listened to the station from the very beginning, following Samuelsen’s career from update anchor to on-air host. Over 25 years, metro Detroit listeners and viewers grew up along with him as he became a more prominent presence on radio, then a husband and father off the air.

We share in the tragic loss felt by the Detroit community at the news of Jamie Samuelsen’s passing. Jamie’s personality and spirit were felt by all on Lions game days, and his voice on the airwaves brought us together. Our thoughts and prayers go out to the Samuelsen family. pic.twitter.com/9zMGzIFQmn

It is with great sorrow that the Detroit Pistons acknowledge the passing of Jamie Samuelsen. Jamie touched many sports fans throughout Detroit during his 20-plus year radio career.

We join the Detroit community in mourning the loss of Jamie Samuelsen. A radio host, writer & TV personality, Jamie was dedicated to his craft and we will miss his enthusiasm for our city & sports franchises. Our thoughts & hearts are with Jamie’s family & friends at The Ticket. https://t.co/93ThCMWSML

We join the Detroit community in mourning the loss of Jamie Samuelsen. A radio host, writer and TV personality, Jamie was dedicated to his craft and we will miss his genuine enthusiasm for the city and its sports franchises. https://t.co/rJCjFTU5vf

We are saddened with the loss of Jamie Samuelsen. He was a staple of the Detroit media ?? ? & will be sorely missed.

Our thoughts & prayers are with Christy, the kids & both families. #CancerSucks

Even after leaving Michigan, I followed Samuelsen on social media and listened through streaming audio. While writing for Yahoo Sports, Bleacher Report, and Bloguin, it was a fanboy thrill to occasionally correspond with Samuelsen via Direct Message during the Giants’ World Series runs in 2010, 2012, and 2014. (He was asking me what I thought about the Giants? The wannabe who listened to Samuelsen on the radio in his car certainly enjoyed that.)

Samuelsen wasn’t that much older than I am, so it’s sobering to see that he passed away from colon cancer. (His advice on air to get a colonoscopy is something I’ll be contemplating the next time I visit my doctor.) Writing about it doesn’t seem real. Sure, he wasn’t going to be on the radio forever, but that was going to be because he decided to move on to something else or retire. Not like this.

Do a Twitter search for “Jamie Samuelsen” after reading this and see how many colleagues, friends, and fans are expressing condolences and celebrating the person he was. Several of those eulogies are embedded in this article, but there are so many, many more. It all makes for a tremendous tribute.

Of course, the wife and three children he leaves behind are his true legacy. Sympathies to Jamie’s family. He is already deeply missed.