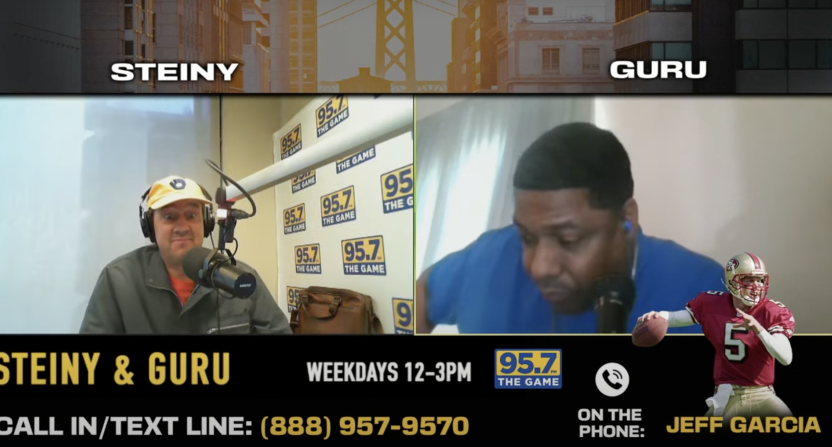 The San Francisco 49ers are in the NFC Championship Game on Sunday. Some have said that quarterback Jimmy Garoppolo is a big part of the reason they are back here for the second time in three years while others have said the Niners are here in spite of their signal-caller.

ESPN’s Mina Kimes is in the latter group and she shared some strong thoughts earlier in the week about how Jimmy G just isn’t getting it done.

“Jimmy Garoppolo isn’t the reason they’re winning,” Kimes said on First Take on Tuesday. “They’re winning with him, but not because of him…He posted the second-lowest QBR in 15 years [against the Packers].

“Since joining the Niners, he has two touchdowns and five interceptions in the postseason. These are not advanced statistics. The dude is just simply not helping them win.”

Former 49ers quarterback Jeff Garcia took exception to those remarks, saying in a since-deleted Instagram post that she couldn’t criticize Garoppolo because she didn’t play in the NFL.

“Who the hell is Mina Kimes and when is the last time she threw a touchdown pass in a game?” Garcia wrote. “Never! Ever! has she taken a snap or can truly understand the ability, the mindset, the physical and mental toughness, that it takes to play the QB position or any position in the NFL.”

“The fact that there are people out there given a platform to talk about something that they have never done is hilarious and that’s how you have to look at her, she’s a joke! So let’s just laugh at her and support Jimmy, root on our Niners to go out and beat the living f–k out of one more team. That’s what it takes. She will never know that feeling. Can I get an amen? Peace.”

Kimes shared Garcia’s post in a since-deleted tweet of her own. Many of Kimes’ colleagues and peers came to her defense. Many people noted that Garcia’s line of attack was common for men upset when women share their opinions about sports.

Yooo @minakimes we applying that pressure on they ass !! They losing their minds lol!!! You love to see it Go Cry Jeff FOH https://t.co/90Wb4fs6jH

if mina kimes makes you *that* mad, I can all but guarantee it ain’t mina kimes you’re mad at ?

when insecure dudes can’t attack the points they attack the person. mina is brilliant and we’re lucky to have her. y’all be nice and not sad and angry like jeffrey here pic.twitter.com/kvEVoPiOPo

“Mina’s role at ESPN is a groundbreaking one that she’s completely earned,” said an ESPN spokesperson in a statement. “Thanks to her hard work and a deep understanding of the game, Mina’s voice is universally respected throughout the league, as well as by her peers, many of whom played the game at the highest level. Mina is a fantastic colleague and our team is better because of her.”

Friday, Garcia called into the Steiny & Guru show on 95.7 The Game out of San Francisco. And while the former QB might have hoped the conversation would stick to this weekend’s game, the hosts understandably made sure to bring up the reason Garcia was in the news, much to his chagrin.

Garcia actually seemed game for the discussion at first, saying “let’s go, let’s talk about it” when the topic was broached. However, right off the bat, Garcia went into full defense mode.

“Well, first of all, I don’t owe anybody an apology for my beliefs and my experience at playing the quarterback position,” said Garcia. “The difficulty of that position, the expectations on that position, how qualified you have to be to be one of 32 starters in the National Football League, from a mental standpoint, from a physical standpoint. You know, people want to comment and tear apart, tear down individuals based upon statistics. The only statistic that matters right now is are you winning games or are you losing games?

“There was nothing sexist about what I had to say, outside of the fact that, yes, women don’t play professional football. There are women who do participate in football. But had it been a man saying the same thing, I would have had the same response for that man who has never stood in the pocket, who has never delivered a touchdown pass, whose never taken a hit to the head while trying to make a play in the pocket. To be able to sit there and criticize someone at the level that Jimmy Garoppolo is at, at the level that any of these quarterbacks are at, at the level that I played at, and say that it was sexist, misogynistic. People wanted to say there was racism behind it. People wanted to break me down as a player.

“Whatever you think, whatever you want to say, it doesn’t matter to me. All I care about are what Niner fans and faithful think. What my family thinks. And what my close friends think. That’s all that matters. And all of this other hypocrisy, this craziness that has stemmed from my comments, about a woman…toward a woman, who is breaking down Jimmy Garoppolo, basically saying he’s along for the ride, that he’s surrounded by a great team, that he’s not contributing in any sort of way.

“First of all, you go play a gamer in zero-degree weather and see how productive you are at even throwing the football ten yards with nobody rushing you and nobody else around you. It’s not an easy thing to do. Secondly, let’s break down the game, where we had a critical holding call on Trent Williams inside the five-yard line that probably would have led to a touchdown instead of the unfortunate interception that took place the next down. Then we had the facemask again going in the five-yard line that brought us back, so we’re talking 14 points potentially that a quarterback would have led the 49ers on the drive.”

Host Matt Steinmetz eventually muscled his way in and asked Garcia “Why Mina Kimes?,” alluding to the fact that plenty of other media members, including men, have made similar comments about Jimmy G.

“Well first of all, what’s your football background?” asked Garcia.

“Okay, here’s another thing. I don’t seek out what other people are saying,” said Garcia. “I’m not sitting here listening to ESPN. There was a post that came through my feed from a 49er faithful, okay? It was in his post where he screen-shot what Mina had said based upon the little video. Or he shared the video. I made a comment on his post, or at least that’s what I thought I was doing, to the 49er faithful, saying, hey, you know what, I’m behind Jimmy. He knows he has to play better. We’re all very self-critical at this level of how we play the game. If we’re not, we wouldn’t be at this level. He’s more critical of himself than anybody else maybe.

“And you know what, I don’t care what anybody else has to say about me and my experience about what I did as a player cause I know what I attained as a player, overcoming a lot of obstacles to get to that professional elite level.”

Garcia continued to say that he lives in 49ers territory and he’ll continue to defend the team and the quarterback. When Steinmetz asked if it was okay if he criticized Garoppolo, Garcia said “go ahead, everybody does.” Steinmetz then reminded Garcia that he never played college or pro football, which would not meet the necessary requirements that Jeff had laid out to be able to do so.

When Steinmetz tried to ask another question, Garcia added “I’m in a war zone right now,” saying that he was fired up about the 49ers and that’s the reason for his strong comments and defense of Garoppolo.

Steinmetz tried to start pushing back on the notion that it seems strange only former quarterbacks can speak critically about NFL quarterbacks but Garcia then said he “wasn’t here to talk about what happened yesterday because it’s yesterday’s news” after an eight-minute diatribe about it. He then launched into some specifics about the matchup with the Los Angeles Rams.

That’s when Daryle “The Guru” Johnson, who was clearly tired of listening to Garcia dance around the heart of the issue, chimed in.

“But listen, Jeff, you’re no dummy, you stepped in it, and you mentioned your family, you’ve got a wife, you’ve got a mother,” said Johnson. “I’m just asking you and I’m blown away. You don’t feel that you need to apologize to Mina? Nobody’s second-guessing your knowledge of football…c’mon man, read the room, Jeff.”

“I’m a very kind person. I’m a very giving person,” Garcia responded. “Do I have a little bit of a chip on my shoulder because of how I had to prove myself consistently, constantly? Absolutely. When I hear somebody, whether it’s Mina or somebody else, talk about the game of football, and give their insight and their professional opinion without ever actually having done it, there’s a flaw to that. Yeah, everybody’s entitled to their opinion. That’s what media is all about.

“It had nothing to do with disrespecting women. Nothing. And if people want to turn it that way, that’s sad. That’s sad on them and that’s sad on you for thinking that I would disrespect a woman in that sort of way. All I said was, you’ve never played the game. You don’t know what it’s like to be on the field.”

“Well why not apologize then?” asked Johnson.

“I’ll get off the phone right now. I’m not gonna talk about this crap anymore if this is what the conversation is gonna be,” said Garcia. “I was brought on to talk about the 49er game. Hey, that’s yesterday’s news. It’s history. It’s old. It’s old. Move on.”

“We told you that we were gonna bring this up,” said Steinmetz.

“You’re playing the victim to the whole media circus,” responded Garcia. “Screw that, man. Screw that. We’re the ones that are on the field being critiqued by 75,000 people, by who knows how many media, by millions of people watching, we have to deal with it every day. I stood up for…a fellow 49er. That’s all I did. That’s all I did. I’m ready to move on. Hey, you guys have a great day.”

At that point, Steinmetz reiterated that Garcia knew this was going to be the topic of conversation before he came on the air and the two engaged in some heated crosstalk before Jeff finally hung up, not before Johnson added “he still thinks he’s playing” as a parting shot.

“He has no regret on anything he said. None at all” added Johnson. “And that sounded like a dude that thought he was playing on Sunday. That’s the worst part. I mean, it’s all bad, but, man, there is no remorse at all.”

You can watch the broadcast of the full interview here.