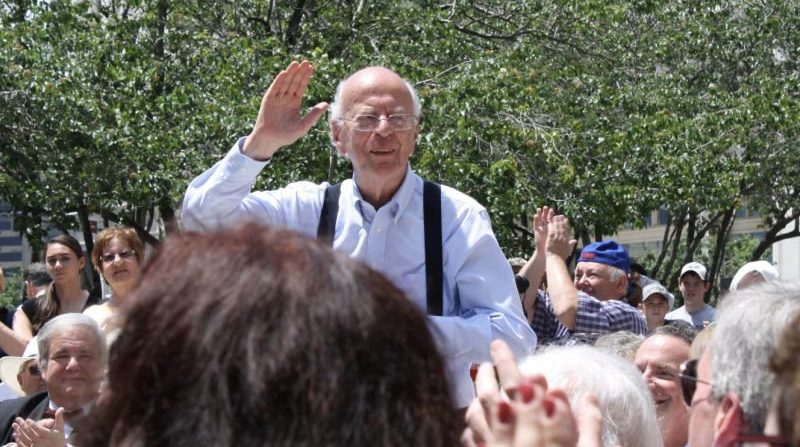 A long-time Chicago sports figure has passed away. Jack Rosenberg, who joined WGN’s radio and TV stations in 1954 and worked there as sports editor for more than 40 years, died Sunday at 94 in Chicago’s Swedish Hospital. Here’s more on him from an obituary by Chicago sports media writer Robert Feder:

Jack Rosenberg, whose name was synonymous with WGN Sports in Chicago for more than 40 years, was credited with inventing much of what became standard in sports broadcast production.

As sports editor of the former Tribune Co. radio and television franchises, he worked closely with such legends as Jack Brickhouse, Vince Lloyd, Lou Boudreau, Jack Quinlan and Irv Kupcinet. He produced all of Brickhouse’s Chicago Bears and Chicago Cubs broadcasts.

…In 2011 Rosenberg was inducted in the Silver Circle of the Chicago/Midwest chapter of the National Academy of Television Arts and Sciences, and in 2017 he was inducted in the WGN Radio Walk of Fame. His class that year posthumously included his close friends Lloyd and Boudreau.

In tribute to Rosenberg, WGN posted the 2017 audio piece they ran on him ahead of that Walk of Fame induction, which includes him discussing the baseball-focused interview he was able to get WGN with President Reagan in 1981 (starting at 0:46):

And here are some highlights from a 2013 piece on Rosenberg by George Castle of the Chicago Baseball Museum:

The older “Rosey” once provided a soundtrack of summer at the ballpark. While Jack Brickhouse handled play by play of Cubs and Sox games for WGN-TV, he was accompanied by a constant typing sound in the background. That was Jack Rosenberg providing a lot of Brickhouse’s storylines.

The manual typewriter on which Rosenberg cranked copy during those afternoons and a few evenings, at old Comiskey Park, is long gone. But in his basement hutch, there’s a trusty old black Royal manual. “I used it yesterday,” said Rosenberg. He does not employ a computer or go on-line. Rosenberg is old-school, if not the school.

Much of his career was connected to Brickhouse’s. They shared a downstate upbringing, Rosenberg in Pekin, Brickhouse a few miles up the Illinois River in Peoria. A gifted writer on the Peoria Journal-Star, Rosenberg was offered a Chicago Tribune sports-writing job in 1954 by the legendary Arch Ward, who founded the baseball All-Star Game. The salary was $100 a week.  Rosenberg thought it over. Pitched by Brickhouse, he instead ended up at Tribune Co.-owned WGN for $85 a week.

The pair became almost as one between Brickhouse’s gift of gab and Rosenberg’s power of the pen. Brickhouse served as an usher at the Rosenbergs’ nuptials.

It’s remarkable to see someone stick with one media outlet for more than four decades, and for them to be such an important part of broadcasts for all those years. Rosenberg had an impressive career, and he leaves a strong legacy.