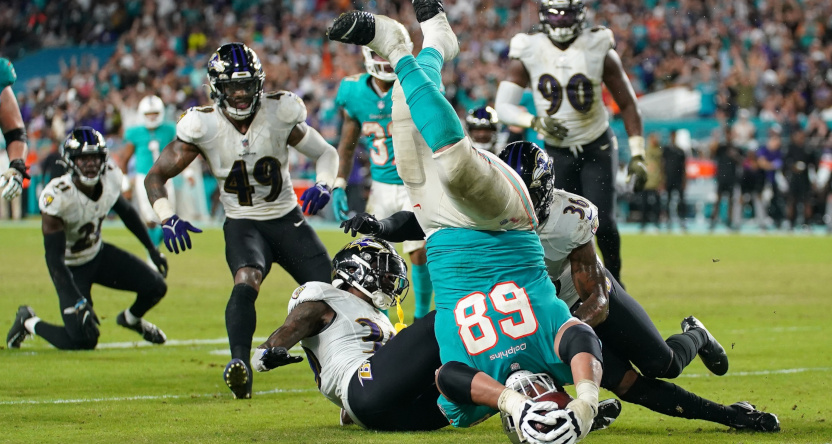 Perhaps the funniest play in the NFL last week came from Miami Dolphins’ 6’6”, 327-pound right guard Robert Hunt. With quarterback Tua Tagovailoa (only playing thanks to an injury to Jacoby Brissett) under pressure on third-and-goal from the six-yard line in the fourth quarter of the Dolphins’ Thursday Night Football game against the Baltimore Ravens, Tagovailoa just threw the ball away. But Hunt caught it, and he absolutely rumbled for a touchdown. However, that touchdown was nullified because Hunt hadn’t reported as an eligible receiver (and this certainly wasn’t a play drawn up to throw it to the tackle). Here’s how that looked and sounded on the Fox/NFL Network broadcast, called by Joe Buck:

That’s a fine just-the-facts call of a bizarre situation, but for pointing out just how bizarre this was, we have to go with the Westwood One radio call from Ian Eagle and Ross Tucker. It features Tucker, a former NFL offensive lineman himself, just cackling through the whole thing. That got some attention Tuesday thanks to Westwood One posting the full clip (after CBS Sports Radio host Zach Gelb posted a clip of him talking to Eagle, and advocating for a Marconi Award for Eagle and Tucker for the call here):

I'm leading the Marconi Award charge for Ian Eagle and @RossTuckerNFL of @westwood1sports.

Here’s the call as it happened. Enjoy.

Ian Eagle & @RossTuckerNFL on the Play of the Year*.

The combination of Eagle’s “Catch is made! Rumbling! For the endzone!” and Tucker’s hysterical laughter over the top is truly the soundtrack this play deserves. Tucker also deserves credit for immediately pointing out that this wouldn’t stand, saying “He lined up at right guard! You can’t throw him the ball!” And Tucker’s later cackling of “He scored! He scored!” was great as well, as is his later “I love my life. That is unbelievable.” Meanwhile, Eagle gives a great “What is going on here?!”, and man, does he ever have a stat lined up later with “Robert Hunt, who played high school basketball in Fort Worth, Texas, showing off his athleticism. Hunt released, and made the grab, and then got upended and lost the ball right at the end on the somersault.” And Eagle’s ending summation of “It’s fun, it’s just not legal” really is perfect. (Perhaps the next #LegalizeIt campaign needs to be about ineligible offensive linemen catching passes?).

Gelb’s interview with Eagle (inserted above) is great there for Eagle’s comments about what this meant for Tucker, starting around 0:28:

“My goodness, Ross, he is such a trip. I really enjoy working with him, because it’s all so authentic and real. And I told him last year, I don’t know if you remember, Zach, we had that Giants-Eagles game, and Daniel Jones had what appeared to be a highlight for his career on a rushing touchdown that didn’t end up that way because of a trip.”

“And Ross, I was doing the game with him in Philadelphia, and Ross reacted in the moment like anybody else would have reacted if somebody was recording them while watching it. And afterwards, we went to break and he apologized to me, and I said ‘What are you apologizing for?’, and he said ‘Aw, no, no, no, I didn’t want to step on your call,’ and I said ‘No, that was awesome! That was real! That was genuine!’ And it was the same thing for that Miami-Baltimore game.”

“That was wild. I knew it wasn’t going to count, there was no possible way that was going to count. That wasn’t designed in any way, shape, or fashion. But it was still really entertaining.”

A thing that’s funny with NFL broadcasts in particular is that many of them try to go over-the-top with Seriousness (TM) and Importance (R), as shown by every full mention of “The National Football League.” But football is still a game, even at the billion-dollar level of the No-Fun League, and it’s still a game where a lot of silly things often happen. And this was definitely one of those, with even Hunt embracing the absurdity afterwards. And we appreciate the Eagle-Tucker broadcast here for recognizing that and leaning into it, and we appreciate Tucker and Eagle in general for being willing to embrace the absurd moments when they happen, even in the National Football League.

[Westwood One on Twitter; photo from Jason Vinlove/USA Today Sports]