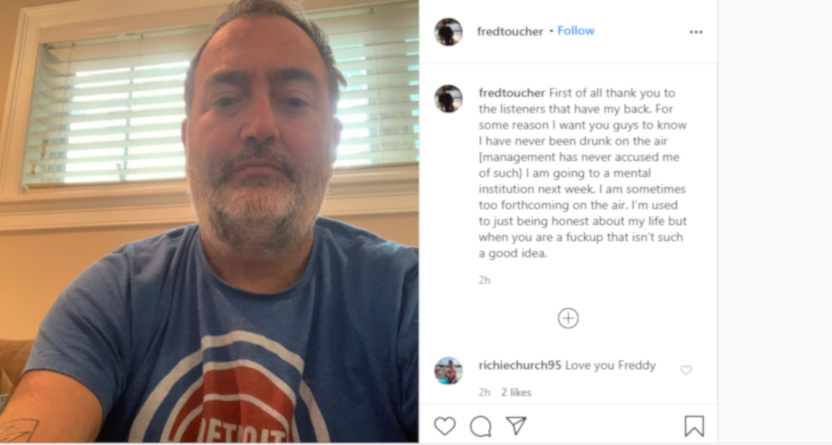 One of the stranger sports radio stories in a while comes from 98.5 The Sports Hub in Boston. Fred Toucher, the long-time co-host of the morning Toucher and Rich show alongside Rich Shertenlieb, showed up late for that show Tuesday and went on rants on a number of subjects, including his divorce, the Black Lives Matter movement, and more.

As Chad Finn of The Boston Globe writes, that’s now led to Toucher being off the show for a yet-to-be-determined period of time.

Toucher, who co-hosts the highly rated program with Rich Shertenlieb, revealed during Tuesday’s show that he was going through a divorce. He had been late for the show, and during the 7 a.m. hour sounded agitated enough that Shertenlieb suggested he should take some time off and offered to go off the air with him at that time.

…Coming out of the first commercial break in the 6 a.m. hour on Wednesday show, Shertenlieb explained why Toucher wasn’t part of the show.

“Listen, with everything that’s going on, Fred’s going to take a couple of days off,’’ said Shertenlieb. “And we love the guy, can’t wait until he gets back. But if you heard any of the show yesterday, we know that this is something that he’s going to just take a few days and step back, and we’re glad. And once again, we wish him the best and he’ll be back soon.”

Toucher also posted about this on Instagram, denying allegations (from some listeners who posted about the show on Twitter) that he was drunk Tuesday, but saying that he plans to check himself into a mental institution:

First of all thank you to the listeners that have my back. For some reason I want you guys to know I have never been drunk on the air [management has never accused me of such} I am going to a mental institution next week. I am sometimes too forthcoming on the air. I’m used to just being honest about my life but when you are a fuckup that isn’t such a good idea.

The Sports Hub usually posts audio of its shows, including Toucher and Rich, and those podcasts are usually posted externally to services like Stitcher as well. But both the station’s page and the external pages don’t have audio from Tuesday’s show. Some of it was used on Kirk Minihane’s Barstool Sports show Wednesday, though:

—-BREAKING NEWS—- Here is some of the Audio from this mornings Toucher and Rich. (This audio was used on the @kirkminshow this morning you can find the full show here https://t.co/9GXx37XUUP) -McInnis pic.twitter.com/P1VCdYwbkk

Here’s a transcription of Toucher’s comments there, which seem to come from several different parts of his show. They include Toucher complaining about Black people who have criticized Jewish people, talking about his divorce, and discussing a caller’s claim that he seems to be on painkillers:

“I’m fascinated that you can attack Jewish people and not, there’s no repercussions. That’s all I’m fascinated with. That’s it. And, you know what, am I right or am I wrong? …I’m getting a divorce! …Yeah, I gotta relax about the whole divorce thing. It’s something that I really need. …Why is it that I’m, like, addicted to chemicals? Why is that part of it? (Shertenlieb says “Maybe, what are they saying, the way you speak?”) Oh, slurring, and this and that? Are you kidding me? What do you think I did this morning? I was late! What do you think I did this morning, I got up and had 18, uh, Bloody Marys?”

That audio certainly sounds bad. And it seems like Toucher may be off the Sports Hub airwaves for a while; Finn’s story includes a statement from Sports Hub management saying he’ll be off the air “while we continue to review the situation”:

Management at the Sports Hub did not provide specifics on Toucher’s status, but passed along a statement from its corporate parent, Beasley Media Group.

“As a responsible company committed to the Boston Community,’’ the statement read, “we take this matter very seriously. Fred will be off the air while we continue to review the situation.”