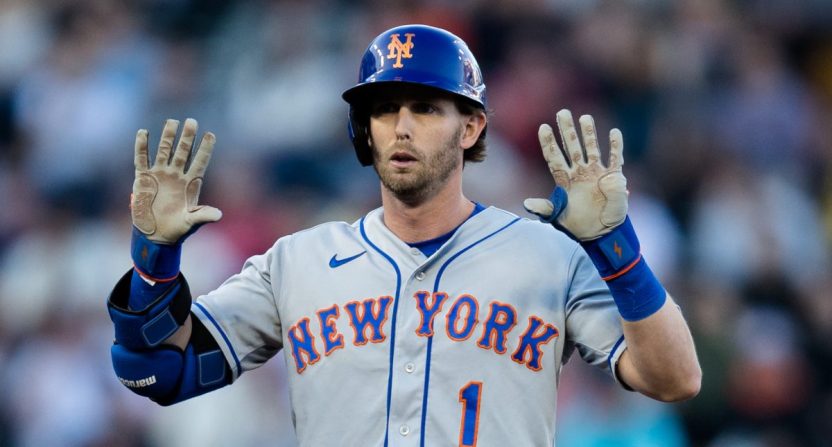 I knew society hasn’t moved past the misogynistic viewpoints surrounding fathers taking paternity leave, but I hoped sports radio hosts were at least finished broadcasting tired narratives. I was wrong.

Players are awarded three days of paternity leave, as negotiated in Major League Baseball’s 2011 collective bargaining agreement. And in recent years, it’s become commonplace to see MLB players take advantage of the policy. Aaron Hicks left the New York Yankees to be with his wife when she gave birth in April. Seth Lugo and David Peterson also both took paternity leave from the New York Mets this season.

Unlike in 2014, when Daniel Murphy was ripped by Mike Francesa and Boomer Esiason for taking paternity leave, the stigma surrounding MLB players being with their significant others during delivery has changed. Hicks, Lugo, Peterson, and anyone else taking paternity leave have been a non-issue on the New York sports radio airwaves. How thoughtful.

But it was too good to be true. Even in 2022, not all sports radio hosts could avoid offering a brutal take on the topic. When Mets All-Star Jeff McNeil stated he would be missing the team’s three-game series against the Atlanta Braves, Fox Sports Radio host Steve Covino morphed into the old man yelling at clouds.

“I don’t want to be on the wrong side of this,” Covino said. “But I hate this story. Because I expect my players to be there, man. I do. I mean it’s the big leagues, bro. Big series! You get paid lots of money, you let the fans down! The fans are what make you.”

?@stevecovino: "I don't want to be on the wrong side of this but I hate this story because I expect my players to be there. It's a BIG series. You let the fans down!"

Covino received pushback from his co-host Rich Davis, who was supportive of McNeil being with his wife for the birth of their child.

“There’s no one debating that family’s not more important,” Covino admitted.

Thankfully, Davis pointed out the absurdity of Covino’s statement. “But you sort of are, you’re debating it right now,” Davis said.

Covino and Rich, formerly of SiriusXM fame, had a 16-year satellite run together that launched on Maxim Radio. Currently, they have a podcast and host weekends on Fox Sports Radio, but this week, they filled in for Doug Gottlieb.

“I think that people take advantage of this,” Covino continued. “I hate to be blatant and rude…but if you could take that much time off, I’m sorry, you’re not that important. If you’re an important guy, then you should be back as soon as you can.”

I’m a diehard Mets fan who was hyped for their series against the Braves, but family and fatherhood are more important than a baseball game, especially in July. And McNeil taking more time to be with his wife than the four hours it may take to give birth doesn’t mean he’s any less valuable to the Mets, it just means the United States is finally starting to catch up to other countries that have long valued parental leave.

Kudos to WFAN and other New York sports media for not being “on the wrong side of this,” I guess? But more than ten years after MLB implemented its paternity leave policy, players are still being stigmatized (by at least a portion of the media) for using it.