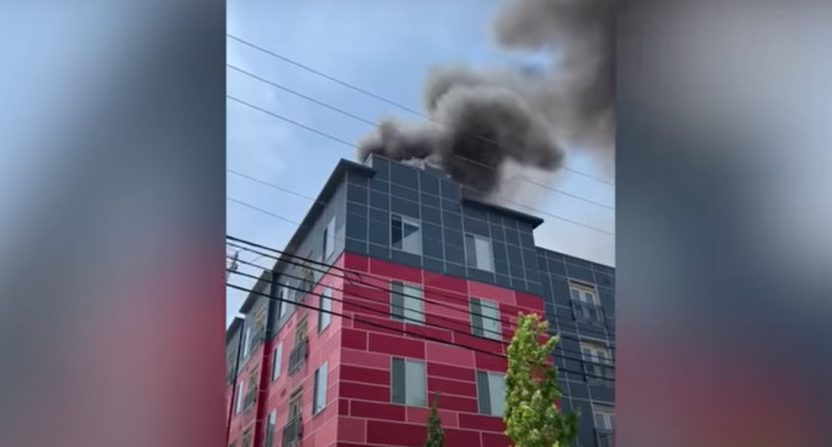 The Pat McAfee Show came to an abrupt end Thursday afternoon when a nearby fire caused a power outage, forcing the crew out of their studio mid-interview.

“That’s a big f*cking fire,” McAfee said earlier in the afternoon as he looked at a live shot of the building from outside. “That smoke smells. The paint from that place, the utilities, the plastic. That’s all just floating right into us.”

The massive fire was occurring in an Indianapolis apartment complex, starting on the fifth floor and spreading to the roof of the building which is next to the studio where McAfee records his daily SiriusXM Radio show.

“The guy just came into the building,” producer Anthony DiGuilio informed the show at one point during the afternoon. “If the fire moves a little more this way, we have to evacuate.”

The crew later celebrated after learning the fire was put out, assuming they were in the clear to keep recording. But during an interview with UFC Welterweight Champion Kamaru Usman, the studio that houses The Pat McAfee Show unexpectedly lost power, knocking them off-air from SiriusXM and YouTube.

“So we just lost power in the middle of one of the greatest promos in history by pound-for-pound, number one fighter in the world Kamaru Usman,” McAfee said. “There’s a fire right next door. Let’s assume they cut off all the electricity. We’re f*cked. Probably for the next few hours.”

The fire was contained, but as McAfee guessed, the fire department needed to cut power to the building and there was no timeline as to when they could be back up and running. Although they were off-air, the crew kept rolling on behind-the-scenes footage, which showed McAfee on his phone, scrambling to update SiriusXM about being off-air before they evacuated the building.

“They got the fire contained, which is good news, but we apologize for the show ending abruptly out of nowhere. No injuries, I believe is what’s being reported. The fire was massive,” McAfee said in a video posted on social media, adding “shout out to the Indianapolis Fire Department.”

According to deputy fire chief Jerry Martin, 12 residents are displaced after the fire impacted three units in the building, but no injuries were reported from the incident.