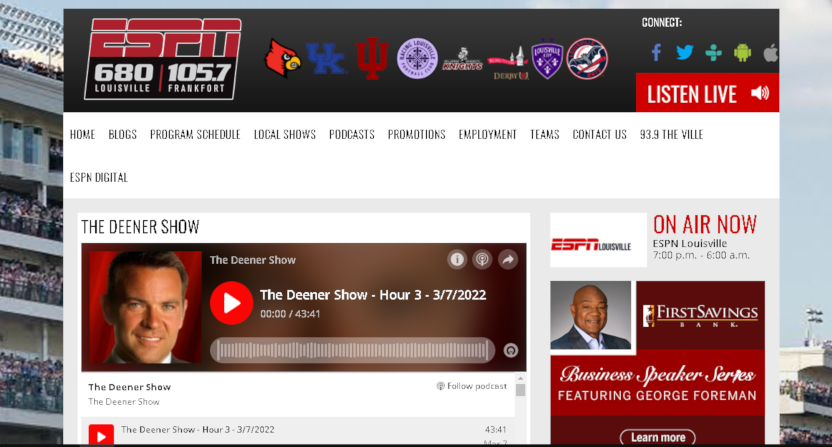 Andrew “Drew” Deener, 49, was booked into Louisville Metro Corrections on Saturday night and charged with fourth-degree assault, a misdemeanor.

According to court documents, officers with the Louisville Metro Police Department were called to Roosters restaurant at 10430 Shelbyville Road just after 9 p.m. Saturday after someone reported a domestic violence incident.

When officers arrived, they found Deener’s girlfriend sitting on a bench. Police reported she told them she and Deener got into an argument in the parking lot, when Deener slammed her head into the side of a vehicle, according to an arrest report.

…Deener was arrested at his home and taken to Louisville Metro Corrections, where online court records indicate he has since bonded out on a $1,000 cash bail. He is currently scheduled to be arraigned March 9.

Here’s more on this from local CBS affiliate WLKY:

The alleged incident happened outside of the Roosters restaurant on Shelbyville Road around 9 p.m. on Saturday. The victim told police after Deener grabbed her head and assaulted her, he walked off.

…He’s charged with assault in the fourth degree (domestic violence).

In addition to his vice president role at ESPN 680, Deener hosts “The Deener Show” on that station weekdays from 7-10 a.m. local. The company in question told WDRB Deener has been placed on administrative leave for the time being. We’ll see what comes of this.