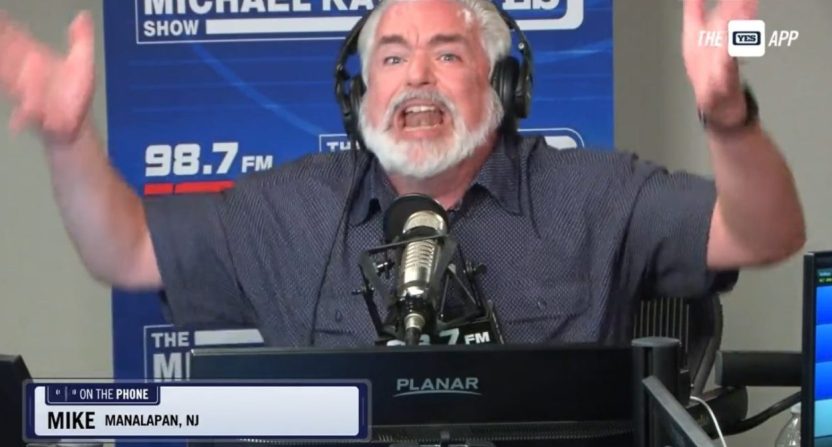 Stephen A. Smith, Skip Bayless, John McEnroe, Dennis Green, the list of great sports ranters is long. But I’m not sure there’s another person who can reach Don La Greca’s level when the 98.7 ESPN New York radio host gets triggered to go off on a tirade.

And Monday afternoon was one for the ages. The “Days Since Last Don Rant” sign in The Michael Kay Show studio was reset before La Greca’s latest explosion even peaked.

La Greca was in the power chair Monday afternoon with Michael Kay having the day off. During the 5pm hour, Mike in Manalapan called into the show, arguing with the ESPN Radio host that Joey Gallo is hurting the New York Yankees. Mike came in hot, claiming La Greca made “one of the most moronic comments I ever heard in my life and it proves why you two would fail if Michael Kay wasn’t part of the show.”

Harsh. But credit La Greca for attempting to engage with the caller despite the low blow, as the two went back and forth over how much Gallo’s failures are actually impacting the historically-good Yankees this season. About five minutes into the argument, the caller suggested “ask Michael Kay, the guy carrying your career.”

“Stop with Michael Kay!” La Greca yelled. “I’m on the air, I worked at the FAN before Michael Kay. I do Rangers’ games without Michael Kay. Sixteen years doing pre and post for the Jets. Guess what? NO MICHAEL KAY!

Having a happy marriage, two kids and being a fabulous driver has absolutely nothing to do with the initial argument about Gallo. But I liked the surprising twist that veered from yelling about a .166 batting average. And while partnering with Michael Kay has certainly been good for La Greca’s career, rant talent like this proves he didn’t need the Yankees play-by-play voice to make it as a radio host, or as a husband, or parent.

After a brief run as the No. 1 afternoon sports radio show in New York, The Michael Kay Show has dropped to second place behind WFAN’s Craig Carton and Evan Roberts. But a tip of the hat to La Greca for crushing it with the things that really matter in life, like having great hair.