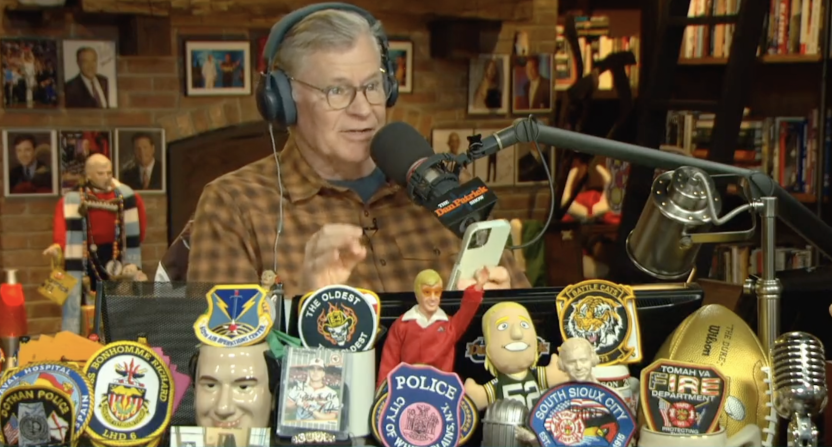 Expansion of the College Football Playoff feels inevitable and there are only two real questions.

First, will the four-team playoff eventually get expanded to 8, 12, or 16 teams?

Second, how soon will the expansion happen?

Dan Patrick decided to try and answer both of those questions on Friday’s The Dan Patrick Show by reporting that the expansion will be to 12 teams and it could happen as soon as next season.

DP has an update on the College Football Playoff expansion from a source:

"A 12 Team College Football Playoff is a go. But they want to get it done for next season. If it's not approved in December, the Playoff won't be a go with 12 teams until 2025."#CFBPlayoff pic.twitter.com/MXqFvfglKX

“I told you I’d have some information here from a source that I’ve been in contact with this morning,” said Patrick. “12-team playoff is a go but they want to get it done for next season. If it’s not approved in December, the playoff won’t be a go with 12 teams until 2025. We’re gonna know in the next couple of weeks if we’re gonna be expanding to 12 team playoff for next season, and if they don’t get it passed, it’s gonna be 2025.”

That’s a pretty bold and exciting report that is sure to thrill many college football fans. The idea that the College Football Playoff could jump from four teams to 12 next year sounds too good to be true. And according to just about every other college football insider and reporter out there, there’s a reason for that. It’s pretty much impossible.

According to Action Network’s Brett McMurphy, the report is “bogus” and “not even possible because of ESPN & (other) bowl contracts.”

Earliest @CFBPlayoff could expand is 2024 season. Sources told @ActionNetworkHQ, DP’s report is “bogus” & “not even possible because of ESPN & (other) bowl contracts” https://t.co/ycpLfeZOnM

The Athletic’s Nicole Auerbach says she’s attended every CFP expansion meeting this year and has been told that the earliest the playoff could expand is 2024 and, if it happens, is probably more likely for 2026.

Officials have said earliest the CFP can expand is 2024. If they don’t reach consensus at Dec. 1 meeting, it won’t expand until 2026.

My latest, from last week: https://t.co/kJMw2Zi95E

3 If commissioners don’t agree on a model at meeting in 2 weeks, expansion will start in 2026

Later during the show, Patrick returned to his source to clarify that while the 12-team playoff is still “a go,” the vote in December would be to start that version in 2023, which, again, can’t happen for all the reasons laid out above.

CORRECTION: The Vote in December for a 12-team College Football Playoff expansion would go into effect in 2023. NOT NEXT SEASON. If it's not approved in December then it wouldn't be a go until 2025. #CFBPlayoff https://t.co/WGvJ67xtoC pic.twitter.com/Nm7c9iqlrW

So the first part of the problem is that Patrick’s “report” was quickly debunked by other reporters who cover college football for a living. Even his “correction” was incorrect according to everything that’s been reported.

The second part of the problem is that this “report” reaffirms his reputation for making bold claims that don’t pan out, especially when it comes to college football.

As some have noted, Patrick reported in 2020 that the Big Ten would not have enough teams to play that season due to the COVID-19 pandemic and that the conference would have to cancel the season. Patrick also reported that Camp Randall Stadium would be used as a hospital instead. Obviously, this did not happen.

Patrick reported in early 2021 that the Georgia football program would soon be investigated by the NCAA, something the school publicly noted they were unaware of and never happened.

While Patrick has certainly carved out a good niche for himself in the world of sports talk radio, breaking news related to college football appears to be a crutch that gets him into trouble more often than it should. And given how many of these reports have fallen through, it’s going to be hard for people to take him seriously in the future the next time he offers up something too-good-to-be-true from a source.

And in fact, it might already be too late for that reputation to be mended.

The College Football Playoff can’t expand until 2024 at the earliest. The CFP people have said this time and time again. All kinds of contract stuff.

Carry on with your day.

Dan Patrick hasn’t been right about anything college football related.

Dan Patrick should cool it on the CFB "source" stuff.

Remember, he said in 2020 that Big Ten football was dead, not coming back and Camp Randall was about to be a field hospital. https://t.co/ncrbnxx8NB

I don’t trust a non-college football media person to break a CFB news story. Their sources just aren’t as good as the ones who have been on the ground level making those connections. If someone like Dan Patrick/Cowherd breaks a college story I take it w/a grain of salt.