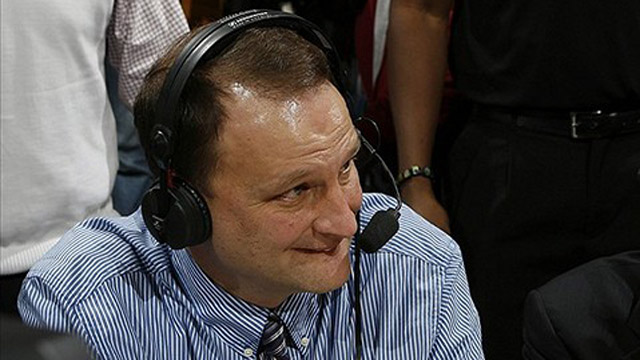 Dan Dakich is no stranger to courting controversy with his comments. The radio host was notably suspended in 2019 for five days from his radio show on The Fan 93.5 and 107.5, an ESPN Radio affiliate in Indianapolis, for “a failure last year on Dan’s part to adhere to the journalistic principles valued by Emmis.” He also courted controversy in 2020 when he called a high school basketball player a “methhead” and threatening to “beat the hell out of every school board member” over a basketball coach’s firing. His show is also the kind of sports radio program where you’re bound to hear the word “pansies” thrown about at-will in discussions about student-athletes. He’s also had his fair share of feuds with fellow ESPN employees as well as college coaches.

Dakich may be in hot water once more after some comments he made earlier this week on his program related to a group of university professors after a heated Twitter exchange about student-athlete compensation.

Nathan Kalman-Lamb, a Lecturing Fellow at Duke who teaches on issues such as the intersection of sport, labor, race, and social inequality, took to Twitter following the news that Jalen Johnson has decided to opt-out of the rest of the basketball season for the Blue Devils, to call out college basketball media members who were dragging the 19-year-old and calling him a quitter. Among the people that he made mention of was Dakich.

Here are some more of the fine folks so unrepentant about the fact that their careers are built entirely on the unpaid labor of young people that they will also gleefully attempt to publicly humiliate them. pic.twitter.com/o0DCwDmeSn

The two ended up getting into it a bit, which eventually led to Dakich blocking Kalman-Lamb.

You didn't think that was all Dan Dakich had to say, did you? pic.twitter.com/vklagFwwsR

A lot more coming..learn before you speak..makes Duke look moronic that you don’t know that:
1-Players get paid ..in cash ..a bunch
Much more from me coming

Others entered the conversation as well, including Dr. Andrew McGregor, Professor of History at the Mountain View Campus of Dallas College, and Dr. Johanna Mellis, a historian who co-hosts a podcast about capitalist sport, labor, and justice. While the arguments took place in several threads, the general consensus on one side was that student-athletes are not properly compensated as part of an unfair labor system, while Dakich contended that student-athletes work hard doing what they love and are compensated fairly for their efforts in various ways.

Wow!!! Is this racist or sexist or both.. my God how is this person allowed to teach … How little respect this guy has for the men & women of all races that bust their ass to get a great education and play the sport they love… https://t.co/X3PTTkpMiB

Lol, it’s not about the effort athletes put in. At ALL. Couldn’t be further from the truth. But you know, read it however you want from your 1-man “arena.”

We are *not* saying that it’s the athletes fault. My colleagues and I are huge supporters of athletes in our classrooms in germs helping them succeed academically.

You are choosing to misunderstand what we are saying. This is a choice for your internet fodder & brand.

This is a completely bad faith (and incomprehensible) reading and you know it. The problem has nothing to do with the aptitude or desire of athletes, it has to do with the failure of institutions to deliver on the education promised. https://t.co/rZIZp36Gn3

On Wednesday, Dakich took to the airwaves to discuss the Twitter brouhaha and ended up going down a strange road, trying to explain his way around his usage of the word “bitching” in the context of the argument, as well as responding to a reply from Dr. Mellis, who wanted to “go at it in the pool” with him.

“I had somebody come at me. Buncha academics last night. Two guys and a lady, right? Two guys and a lady came at me. And they said, ‘well, you’re yelling at student-athletes while they’re being exploited’ or something, and I said, look, maybe, but I…I was in the arena and you guys were sitting outside bitching. Now, remember, it was two girls…two men and one lady. Guess what that got called? Sexist. (Laughs) Be careful. I didn’t even realize, I just said bitching because it’s what people do. It’s what everybody does, everybody just bitches. But that’s sexist apparently because I said bitching and a lady was in the conversation. And I said outside the arena, and then she wanted to, quote, go at in the pool. Well, if you go at it in a pool, that’s a public place and then I’m gonna have to get divorced, and then it’s just gonna be a problem.”

As detailed in Ian Kennedy on CKSN.ca, Dakich then started “doxing Kalman-Lamb by physically spelling out his last name to listeners and repeatedly discussing his office hours in a hostile manner.” Dakich also referred to him as a “d-bag” while launching into a discussion about how athletic coaches are better than professors because they have more “office hours.”

As a radio host, Dakich is someone who thrives on these kinds of interactions. Aggrieved responses to his way of seeing the world, whether legitimate or not, fuel many of the interludes in-between discussions about how today’s Indiana basketball players are soft and that we don’t have any respect for elders anymore. But there’s a fine line between those kinds of grievances and the misogynistic comments and doxing that he introduced to this conversation.

It’s unclear what, if anything, will come of the most recent incident, but it’s the latest in a pattern of interactions that don’t seem to have much of a place in the modern world.

Update: ESPN released a statement on Dakich: “We are taking this matter very seriously and are in the process of looking into it.”

BREAKING: I just received a statement from ESPN on Dan Dakich. "We are taking this matter very seriously and are in the process of looking into it.”

Ironically..it came up with 2 options
Deactivate for 6 months
Deactivate for 12 months
I took it as a sign and deactivated for a year
Amazing things happen to me in church

Too much fun to be had and too much truth to be told!!!