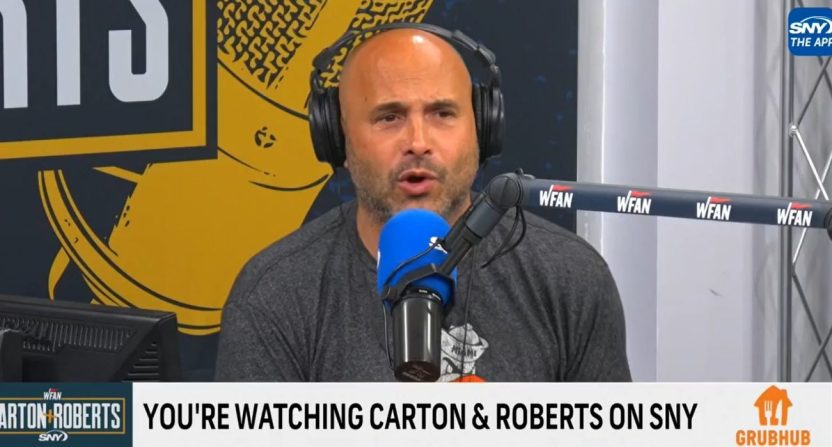 After bypassing the opportunity to engage in a radio war with Boomer Esiason, Craig Carton is now embroiled in a brouhaha with former WFAN host John Jastremski.

Earlier this week, Carton told his WFAN co-host Evan Roberts that Jastremski once “shunned” his career advice. Jastremski left WFAN last year after being recruited to join The Ringer by Bill Simmons.

“He’s not even in the business anymore, right?” Carton said of Jastremski. “I liked JJ a lot but that was not the smartest career move. I thought he went to work at McDonald’s or something. As a a manager, not like flipping burgers or anything.”

After being reminded that in addition to his podcast on The Ringer, Jastremski also regularly appears on studio shows for SNY, Carton said, “You see lots of people on SNY, they pay like $30 a shift. Not a joke, $30 a shift.” Carton and Roberts is simulcast by SNY for two hours every day, but that partnership hasn’t stopped Carton from chiding the network for being cheap in the past.

Carton further explained that in addition to advising Jastremski against joining Simmons at The Ringer, he wanted the young radio host to stop saying “National Football League” instead of “NFL,” imploring him to “talk like normal people talk.”

Jastremski was tipped off to Carton’s recent comments and he responded on his Ringer podcast New York, New York.

“I don’t like going here with this stuff, ’cause I know this plays right into what this guy likes to do,” Jastremski began. “This is like his M.O. This is what he’s done his entire career. He’s had success doing it. He lives for this stuff. But it really set me off. And it set me off because I gotta see it on Barrett Sports Media while I’m on vacation. Like I wanna be bothered with this sh*t, number one. Number two, it’s just tone-deaf, insulting, and flat-out rude every which way.

“Number one: going after people who work at McDonald’s? Who the hell are you to do that? Number two: You’re insulting a multi-billion-dollar company where I work. Where I have a great job, I have a great platform, a great producer. I have two great jobs, might I add. And you’re insulting both of them. By the way, you’re on that network. Five days a week. And you’re insulting that network. How stupid are you? You’re taking shots at people who work at the network you’re on, the network I’m on. And I could tell you, it pays well. I do OK.”

To this point, the severity of Jastremski’s response was on par with Carton’s initial comments, but the next line is where things sort of blew up.

“When it comes to career advice, hey guess what?” Jastremski asked. “I listen to legends. Bill Simmons, you ever hear of him? Worth a lot more than you. Mike Francesa? My boy Adam Schein? I listen to those guys. I’m not listening to a crook. So you know what? Go take a f*cking hike. Let’s leave it at that.”

In 2017, Craig Carton was arrested by the FBI on federal charges. He was later convicted of wire and securities fraud, for which he served just over a year in prison. Carton returned to WFAN in 2020 and brought the station’s afternoon show back to prominence with ratings success. While the “crook” insult is valid, considering Carton went to prison, Jastremski running to that defense so soon is also a bit of an uninventive copout.

Carton learned of Jastremski’s rebuttal Friday afternoon and was confused to see that his desire to offer a young radio host career advice warranted such a personal cheap shot.

“He attacked me and told me to eff off and called me a crook because I tried to help his career out? Carton asked. “I thought from a career standpoint, being on WFAN was better than being on any podcast. That’s what we’re talking about? And I’m the bad guy?”

“I like JJ,” Carton continued. “But if you want to have a war, you’re picking the wrong guy.”

Clearly, Jastremski was irked by Carton mocking his career decision more than he was bothered by Carton’s desire to offer career advice. But Carton’s initial comments were more of a shot at The Ringer and the podcasting industry than they were a personal insult to Jastremski.

Carton invited Jastremski on the radio to discuss their beef, insisting that it would remain cordial, but the podcaster was on a flight home from vacation Friday afternoon.