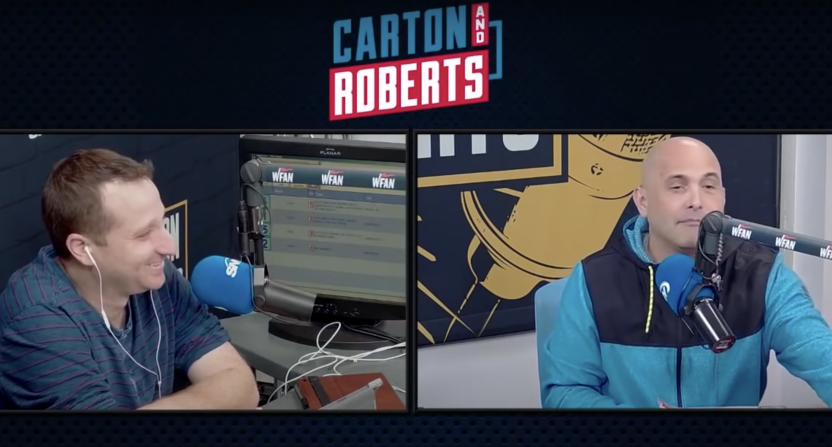 Before he was one of the top sports radio personalities at WFAN in New York (for the second time), Craig Carton worked in various markets around the country.

During a stint at WWWE in Cleveland in the early 90s, Carton was invited into the Cleveland Indians’ locker room where he was allowed to witness one of the all-time weirdest pre-game rituals this side of Jobu. Carton, who says that he was sworn to secrecy, decided to break the seal and talk about the incident on Monday’s episode of Carton & Roberts on WFAN.

The topic came up during a conversation about a podcast appearance in which free agent Carlos Correa insulted Derek Jeter. Discussing a video of Correa, it was mentioned that Carlos Baerga, who played for the Indians in the 90s, was there as well. From there, the story began.

“Carlos Baerga, how do I say this nicely… Carlos Baerga has a weird habit in the locker room before games,” said Carton.

“So I get brought into the Cleveland Indians locker room. Charles Nagy was a young stud pitcher for them…he and I were friendly. I wouldn’t say we were friends, but, friendly. So I’m in the Indians locker room, and one of the guys is like, ‘Charlie, show him.” I go, ‘Show me what?’ ‘Alright we’re gonna show you but you can’t talk about it on your show.’ I was on the air in Cleveland at the time. At the time, I couldn’t talk about it. Now, 30 years later, I think I’m allowed to talk about it.”

After checking to make sure he wasn’t breaking “code,” Carton continued.

“So they go, you gotta go see for yourself,” Carton continued. “So there’s a trainer’s room separate from the actual clubhouse… As I walk towards the trainer’s room, I hear this.”

Carton then makes the sound of something banging against a table every second or so.

“You know those circular doctor stools that swivel the full 360? And they’re like metal. Carlos Baerga is sitting on top of one of those stools and his baseball pants are down around his ankles. In his hand is what could very well be a baseball bat but it’s much smaller and it’s attached to his body, and he is slapping it against the doctor stool. Rhythmically. BOOM. BOOM. BOOM.

“And half the Indians roster are behind me, all laughing hysterically. He keeps going though. He doesn’t stop. I go back in and I go to Nagy, ‘what’s that?” He goes, ‘Pre-game ritual. Nobody asks. Nobody wants to know.”

For what it’s worth, 1993 (presumably the season in which this happened) was one of Baerga’s best. He hit .321 with 21 home runs and 114 RBIs, was named an All-Star, and earned a Silver Slugger award. We’re not trying to draw a correlation between the story and the outcome. Like Carton, we’re simply passing along information.

We’re guessing this is an anecdote that the franchise will leave to history, much like their name, when they become the Cleveland Guardians next season.