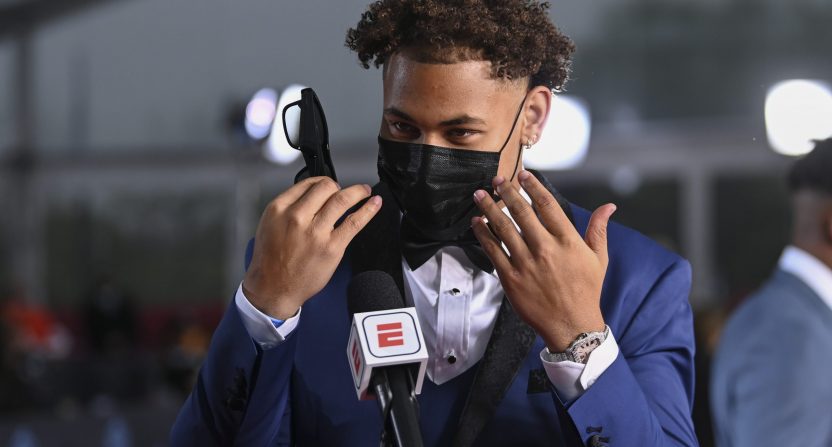 Back in March, Colin Cowherd casually mentioned on “The Herd” podcast that North Dakota State quarterback Trey Lance was hanging out at his house. That’s notable considering that Lance was in the midst of preparing for the 2021 NFL Draft, in which he was selected by the San Francisco 49ers with the third pick earlier this week.

“I think he’s special,” Cowherd said at the time. “By the way, I’m not going to lie, he was at my house 24 hours ago. Very humble, very gracious, he’s got all the right things in life that he cares about.”

Eyebrows were raised and internet detectives got to work trying to figure out the connection. Naturally, the focus turned to Lance and his potential relationship with Cowherd’s 20-year-old daughter, Liv. And where do you go in 2021 to figure out details about potential romances between two 20-somethings? Instagram.

It was quickly uncovered that the two were interacting on Instagram and Lance had “liked” plenty of her photos along the way. However, neither side seem to confirm one way or another that they were officially together.

Meanwhile, in the days leading up to the draft, Cowherd made it clear that he was 100% sure the Niners would end up picking Mac Jones. “It’s crystal clear, it’s all coming together,” said the radio host on a recent online video. Which…was not correct.

Do you enjoy watching clips of @ColinCowherd being supremely arrogant, yet spectacularly wrong at the same time? Well this is your lucky day!#NFLDraft pic.twitter.com/w9RLLsmLv7

And then, perhaps in typical Cowherd fashion, he started explaining why the Niners’ selection of Lance made perfect sense. He also once again brought up the fact that he knows Lance personally.

“I think it’s the right pick. I think he’s a bigger, stronger athlete than Mac Jones,” Cowherd said on the air. He also shouted out Lance in an April 29 tweet as if the two had some kind of personal relationship. Liv also retweeted the tweet, for what it’s worth.

Per the NY Post, here’s what Cowherd had to say about Lance after being drafted where, again, he mentions the personal connection between them.

“I know Trey, I like him, I think he’s a really good kid. This is 6-foot-4, 220 [pounds], big arm, can run — he has as many starts as Mac Jones, but unlike Mac, he didn’t have the protection, didn’t have the many receivers that were wide open. Every scout I know, every executive I know loves this kid. This is the right move. I’m sorry, but I can’t go low ceiling with Mac Jones, can’t do it. Ha, it’s great. Yeah, baby, kid earned it, couldn’t be happier.”

Cut to Friday night when Mike Florio at Pro Football Talk wrote an article on how Cowherd’s PR team sent him an email claiming that, in fact, the radio host did influence the Niners to pick Lance. The email was titled  “Did Colin Cowherd help 49ers draft Trey Lance?”

Included in that email was a transcript of Cowherd’s remarks from his podcast.

“So, long story short, I live in L.A.,” he said. “Trey Lance was working out in L.A., was working out in L.A. about three weeks ago for the draft. Ran into Trey Lance. Really, really impressed with him as a kid — good size, looks you in the eye, really humble, really thoughtful. And after meeting him, it’s funny. I sent a text to a couple of GMs that I thought may have the chance to get him, one of them John Lynch. So I text John, I said ‘Hey, I just met Trey Lance . . . I don’t know what you’re doing with the number 3 pick, but . . . totally impressed, so humble, what a great kid,’ and John’s like ‘Thanks, Colin!’

“I don’t hear anything. Then after the third pick, I get a couple of fist bumps texted to me by John Lynch. So I know I had no influence, but nonetheless, it made me laugh. John’s a great guy and I actually think it’s the right pick.”

It’s a little weird to see Cowherd say directly “I know I had no influence” in a PR push that is all about convincing people that he directly influenced the pick, but that is perhaps also the point. Cowherd deflects while his PR folks try to make him look like a kingmaker.

It’s also kinda funny the way Cowherd frames the interaction. As if he just so happened to randomly run into Lance, a guy who, by his own admission, has been at his house.

Per Florio, the 49ers are saying that Lance was always going to be their pick and that nothing Cowherd had to say ultimately mattered. If it’s true that Lynch texted Cowherd after the selection, it may have just been a way to share in the excitement knowing that Colin and Trey have a relationship, but nothing more.

The larger question is, of course, is there some kind of ethical issue with Cowherd, who works in the media, directly attempting to influence a sports franchise to draft a player he has a personal relationship with? Cowherd’s not a reporter and (clearly) isn’t being held to the kind of journalistic standards that someone like Adrian Wojnarowski or Adam Schefter is held to. But as someone who makes a living off of hot takes about topics such as “who will the 49ers draft?” is there something a bit off about him also attempting to work the backchannels to get his daughter’s potential paramour picked?

Ultimately, it’s more likely than not that the San Francisco 49ers simply did whatever they wanted to and Colin Cowherd’s presumed influence was nothing more than friendly chatter between two people in the sports industry. But like many other things in Colin’s sphere, it’s certainly a gray space worth pondering.