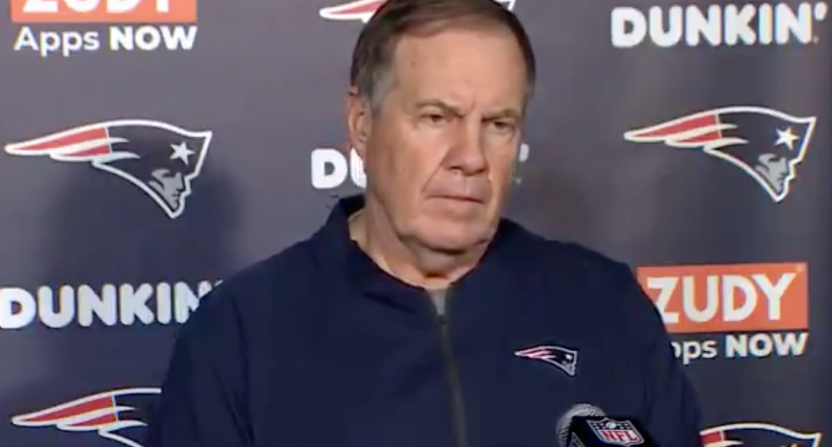 What has Boston sports radio become if they can’t be respectful of a six-time Super Bowl winning head coach and, more importantly, an old man like Bill Belichick?

Belichick is trying his best, but apparently, that’s not good enough for Boston sports radio shows who won’t let the aging head coach evade criticism. But as sports radio holds Belichick to a higher standard, one young Patriots fan is imploring local hosts to be nicer to the older gentleman.

Florida sports anchor for WPBF Yianni Kourakis, a New England native, recently shared a video of his daughter, Paige, who was disgusted as they listened to Boston sports radio in the car.

Listening to Boston sports talk on way to horseback riding, Paige thinks the hosts are mean to Bill Belichick

“He has to be stressed Tom Brady quit on him” pic.twitter.com/uY0yCmpk9T

“I don’t want to hear their ideas right now about Bill Belichick,” she said, admitting that Boston sports radio is being mean to the Patriots head coach. “He’s an old person and he’s trying his best. I mean, he has to be stressed that Tom Brady quit the team.”

Belichick is 70 years old, and, gosh darn it, he is trying his best. Even if he has lost some zip on his fastball, is that deserving of criticism? Would you go to Walmart and blast the greeter who might not be able to catch as many people with a ‘hello’ as they did when they were younger? Or how about walking into your local coffee shop to yell at an older person reading yesterday’s news in a newspaper instead of using modern technology to catch up on current events. Why does Belichick receive different treatment? I’m sure he keeps his AARP card in his wallet just like they do.

It’s nice to see America’s youth maintaining respect for our elders. Kids too often get a bad wrap for not caring enough about the aging population. And she makes a great point, Belichick probably is stressed right now. He’s the head coach of a team without an offensive or defensive coordinator and a franchise still reeling from the loss of Tom Brady. Are those hardships Belichick’s fault? Maybe it’s time for sports radio to start treating Belichick with the same respect and kindness he has for the media.