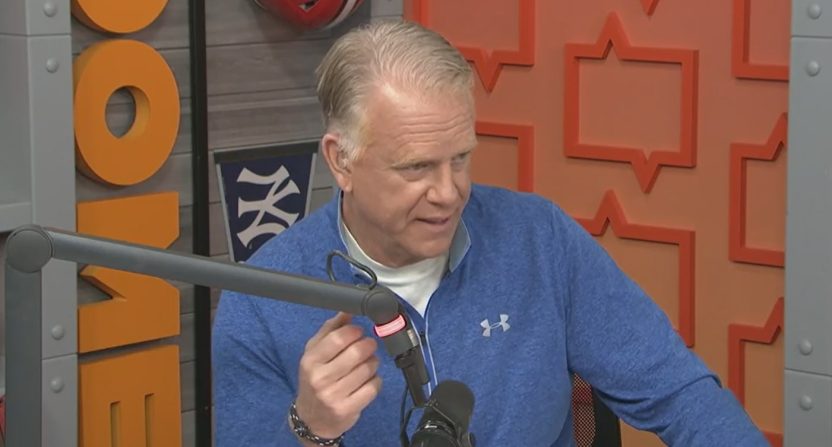 Wednesday morning, WFAN host Craig Carton predicted that colleague Boomer Esiason would retire within the next year. As anyone might expect, Boomer had a reaction to that the very next day, refuting that claim and making some predictions of his own.

Here’s Carton, who co-hosted a show with the former NFL quarterback for 10 years, getting super-specific about when his fellow radio host might call it a career.

“I wonder how much longer Boomer’s gonna do it?” Carton wondered to his current WFAN co-host Evan Roberts. “The longest he would ever do it would be to 65 and he’s 61 now. I don’t think he’ll do four more, but that will be the longest he would ever do it. I could see Boomer, a year from now, saying, ‘I’ve done everything I could possibly do professionally, I’m good, I wanna relax, enjoy my grandkids,’…and I think he’s done.”

And here’s Esiason on Thursday, shooting all of that down and having some fun with his future plans.

“It does happen so fast,” Giannotti said, reflecting on the last two years working together. “Is that why you’re contemplating retirement?”

“Yeah, I read that,” Esiason said. “I guess Spank (Craig Carton) is predicting that I’m retiring next year. You guys ok with that? He just throws crap out there. I read the one article that said Craig having worked with Boomer and he knows the executives there, so there’s probably some truth there because of his connections within the company.”

“Alright. Ok. Big article. ‘I’m retiring’. It gets sent to me and I don’t know where this comes from. Just wanna let you know I will be signing a five-year extension today and also to let you know, in that new contract, I can leave at 9:00 any day. So I’m only working 6:00-9:00, and they’re building me a whole studio out in the Hamptons,” he joked.

“Well apparently people are panicking about you potentially leaving,” Giannotti said. “So now would be the time to ask for all of those demands. You seem annoyed by this.”

“I am annoyed by this,” admitted Esiason. “Spank is working 18 hours a day. He knows not what he says. He’s so tired when he comes here and when he works here. He’s exhausted. I think he’s tired of working with Evan and I can hear that in his voice. The whole group. I think he’s just tired.”

Esiason then decided to sow some seeds of doubt between Carton and his current co-host, perhaps playfully, perhaps not, as is customary when it comes to the world of New York sports radio.

“I can hear it in his voice,” Esiason said. “I can just hear how tired he is and he’s working himself to the bone, which is good. I appreciate the work ethic, I admire it. I think when they go into stuff like that he’s sending a message to Evan. You know what I’m saying?”

“No, I don’t actually,” Giannotti responded. “What message is he sending to him?”

Esiason added that he thinks that given the way Carton pushes himself, working “18 hours a day,” he “may be dead before I retire.”

Giannotti then pondered which part of Boomer’s rant would end up in the headline when this is “written about in Awful Announcing.” Let the record show we went with that last bit, cause that’s a pretty great quote.