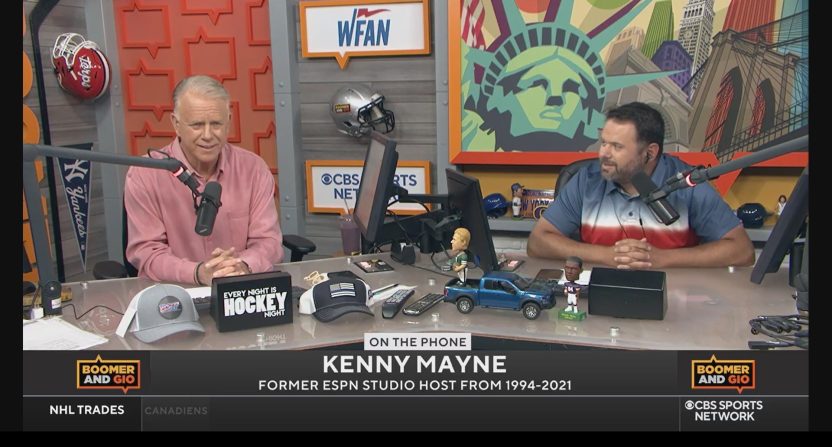 Every so often, sports radio hosts are forced to be flunkies to their station or company by conducting an interview that helps promote the brand.

Luckily for WFAN’s Boomer Esiason and Gregg Giannotti, there are much worse forced guests than Kenny Mayne. But if you listen to WFAN’s morning show, you’re aware that Boomer and Gio rarely welcome guests to the show, with producer Al Dukes often touting interviews as a ratings killer. They made an exception for Mayne, however, who recently launched a podcast with WFAN parent company Audacy’s 2400 Sports studio.

Instead of introducing Mayne as a former SportsCenter anchor and adding a quick mention of his new podcast Hey Mayne, Giannotti read a company-written introduction that lasted 30 seconds and felt even longer. Aware that the audience was nearly just bored to death by the intro, Mayne had the perfect response to Giannotti’s 30 second soliloquy.

“You’re trying to say you were forced to do this interview is essentially what you just said. I get it,” Mayne said, drawing a fit of laughter from Giannotti and Esiason. This isn’t Mayne’s first rodeo, he understands the business side of sports media as well as anyone after 27 years at ESPN.

“No! I just want to make sure everybody knows about what’s going on with Audacy,” Giannotti said with a laugh.

Mayne proceeded to sell his new podcast himself, categorizing the new gig as “sending grandpa to bingo for a couple hours, ‘go do something, have fun and we’ll pick you up on the bus later.’” Despite downplaying the podcast, Mayne did admit the new project is “fun,” adding that he didn’t know he’d like it as much as he does.

Now that we’ve pleased Audacy and tackled the “forced” part of the interview promoting Mayne’s podcast, Boomer and Gio were free to get into more entertaining topics. But first:

“I’m gonna order coffee now,” Mayne said. “Same thing as yesterday, I’m on the radio. Oh wait, you’re not the same girl. Four shots, a little, not a lot of hot water, like a strong Americano.”

This wasn’t a bit, as the barista could be heard in the background asking, “what size?”

Boomer and Gio appeared perplexed when Mayne began his Starbucks order, but they eventually chuckled at the bizarre interview moment.

For radio hosts who don’t like disrupting the cadence of their show with guests, was this their nightmare? Battle through two minutes of podcast promotion only to have the guest place his Starbucks order, seemingly less engaged than the hosts are? Or is this just Kenny Mayne being Kenny Mayne, and the interview-hating hosts preferred the Starbucks conversation rather than traditional corporate jargon to promote a podcast.