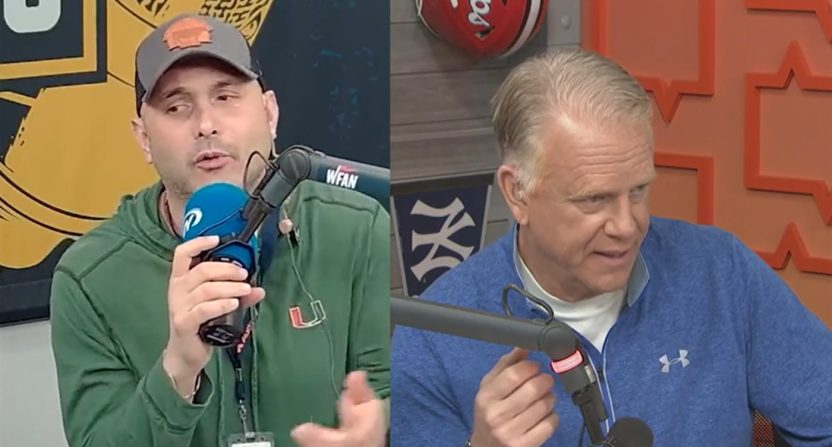 The relationship between WFAN’s Boomer Esiason and Craig Carton feels destined to eventually go from good-natured ribbing to an all-out feud, not that anyone’s rooting for it to happen.

Friday morning, Carton was hosting his recently-launched FS1 morning show. But he’s getting an off day from WFAN in the afternoon, a decision that didn’t sit well with Esiason.

“Company policy around here now is Spike (station program director Spike Eskin) giving guys off,” Esiason griped earlier this week on his WFAN morning show with co-host Gregg Giannotti. “I guess they’re giving Craig off on Friday, because he’s tired or something?”

More than Carton getting a day off from WFAN, Esiason took issue with the fact that his former radio partner was still going to be hosting his national TV show for Fox.

Thursday afternoon, Carton fired back, arguing that Esiason takes a day off from WFAN every year to film the Super Bowl Greatest Commercials special for CBS. Esiason later claimed that he uses a vacation day from WFAN to film those specials, whereas Carton is allegedly just being handed a free day from management.

“Never in the history of this radio station has anybody ever been told by the manager to sit one out,” Esiason ranted about the topic again Friday morning. “Imus was here, Big Mike was here, Mike would just take off whenever he wanted to, but it was vacation days!

With Chris Russo and Mike Francesa long gone, and Carton having spent a couple of years away from the station as he got his life in order, former NFL MVP Esiason is the undisputed leader and captain of WFAN. Clearly, the captain feels differently than the manager.

“This is our manager over here, sitting him on the bench because he needs a rest weekend,” a perplexed Esiason said.

Giannotti did point out that the holiday ratings period is largely ignored by radio stations, much like the summer books are. And although final numbers for the fall book have not been released, Carton’s afternoon show with co-host Evan Roberts looks to have dominated its biggest competition, The Michael Kay Show on ESPN New York.

A two-and-a-half-hour national morning TV show followed by a four-hour afternoon radio program every single weekday is a grueling schedule for Carton. But it’s the schedule he signed up for.