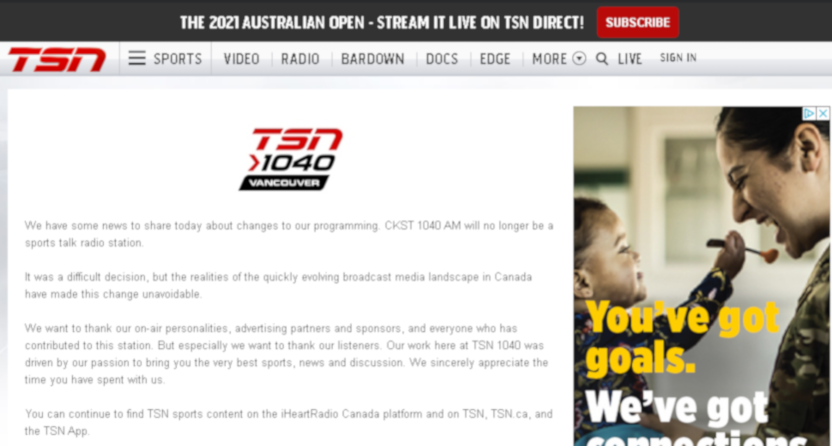 The last couple of weeks have seen massive cuts from Canadian telecom company Bell, parent of CTV and TSN, including long-time TSN figures from Dan O’Toole to Producer Tim to Natasha Staniszewski, Kristian Jack and Brent Wallace. On Tuesday, Bell made some of their biggest sports cuts yet, suddenly shutting down their sports radio stations in Vancouver (TSN 1040), Winnipeg (TSN 1290), and Hamilton (TSN 1150). Those stations suddenly just started playing music or Bloomberg Radio, as Steve Faguy of The Montreal Gazette noted:

Can confirm this. TSN 1290 in Winnipeg has now also been replaced by music.

Scott Brown of The Vancouver Sun has more on how this played out on Vancouver’s TSN 1040:

Tuesday started off like any other day at TSN 1040, with morning hosts Mike Halford and Jason Brough signing on at 6 a.m.

However, listeners knew something major was about to happen after TSN 1040’s Twitter account was deactivated and the third hour of the Halford & Brough morning show was yanked and replaced with U.S. radio programming from ESPN.

Listeners were then told an announcement on the future of TSN 1040 would made at 9:30 a.m.

…A recorded announcement that played on that station at 9:30 a.m. stated that a new format for CKST would be announced on Friday at 7 a.m.

“This was a difficult decision but the reality of the quickly evolving broadcast media landscape in Canada have made this change unavoidable. We want to thank our on-air personalities, advertising partners and sponsors, and everyone who has contributed to this station, but especially we want to thank you, our listeners,” the statement said.

The announcement was followed by the song Good Riddance by Green Day.

Here’s that clip from Brown:

Update: And as per Steve Ewen of The Province, people in the 1040 building didn’t know what was going on when that announcement played:

Being told the message that played on @TSN1040 this morning about no longer being a sports station came out of Toronto and people in the building weren't aware what was happening until they started getting texts from listeners about it. They couldn't have done this last night?

And in Hamilton, Marshall Ferguson was set to host his afternoon show with Kyle Melo as normal, and, well:

Meanwhile, John Hodge of 3 Down Nation tweeted that he texted a TSN Radio employee condolences, and that was the first news the employee got of this:

Just texted a TSN radio employee to say I was sorry to hear the news. Their response?

Paul Friesen of The Winnipeg Sun had a similar report:

Texted one of the guys at TSN-1290 just now. Hasn't received a call or email. "None of us know what is going on. Where is everyone seeing or hearing this?"

Here are the official statements on TSN’s website about the different stations: Vancouver, Winnipeg, and Hamilton. As Kyle Cushman noted, the Vancouver and Winnipeg statements are identical, with no information on what’s coming next, while the Hamilton statement doesn’t even include the boilerplate farewell, but is rather a “Welcome! TSN 1150 is now BNN Bloomberg Radio 1150. We are proud to launch the newest BNN Bloomberg radio station in Hamilton.”

Update: Here’s more from Brown on how 1040 employees were finally called by management, and then told they had 30 minutes to gather their belongings:

“Unfortunately, the future broadcast outlook does not have any good news on the horizon for us … the conclusion was that we cannot continue to operate TSN radio to this market,” Hewson told stunned staff.

It’s not known at this time just how many jobs have been cut in Vancouver but Hewson said Bell Media’s human resources department would be reaching out to every TSN 1040 staff member.

“It’s important for you to understand in terms of what your separation package looks like, and all of the details that are included with it,” said Hewson, before announcing that staff had 30 minutes to collect personal items before corporate security implemented a “shutdown process.”

“I would do so as fast as possible.”

As for what’s coming in Vancouver and Winnipeg, The Athletic’s Ian Mendes had this:

Sounds like later this week, Bell Media will announce the TSN stations in Winnipeg and Vancouver will be altered to their “Funny format”.

And Rob Williams of the Daily Hive has more on that from an internal Bell memo:

“The adjustments we’re making to some of our radio stations this week offer a good example of Bell Media’s readiness to change when it’s right for the business, especially when our costs are too high to justify where we simply have a better model to serve a given marketplace,” said Oosterman.

“Later this week, we’ll also transition TSN radio stations in Winnipeg and Vancouver to our funny format, which has already proven highly successful in markets like Hamilton and Calgary with its standup comedy content.”

Finally, a note from Bell Media president Wade Oosterman. I think it's the first one since the exec purge in January. Kinda weird it's coming now, tied to three AM radio station changes. pic.twitter.com/EhIUFxLvAv

Meanwhile, here are the first two paragraphs of the Vancouver/Winnipeg farewells on TSN’s sites, quoting from the Winnipeg one (the only change in Vancouver is the station ID and frequency):

We have some news to share today about changes to our programming. CFRW 1290 AM will no longer be a sports talk radio station.

It was a difficult decision, but the realities of the quickly evolving broadcast media landscape in Canada have made this change unavoidable.

Yeah, it’s a really quickly evolving broadcast media landscape when you pull three radio stations off the air without even telling their employees first, much less providing any signal to listeners that this was coming. And that’s a terrible look. Even if there was some good reason to kill these stations (and that’s far from established), it would have been so much better if they had made the announcement with some notice to give personalities the chance to do some final shows and say on-air goodbyes.

For an example of how this could have been done better, compare San Francisco sports radio station’s KNBR 2019 takeover of famed music station KFOG’s frequency as a FM repeater of their main AM frequency. That move still drew a lot of criticism, but it was done with two weeks of public notice, providing time for a lot of KFOG memories and tributes. A mid-day, mid-show move like Bell’s is worse on so many levels, especially with that not even communicated to many employees first. And that’s been a trend for them lately, with O’Toole indicating he only found out Wednesday was his last show after the fact.

This is a huge blow to the Canadian sports media landscape, and it seems set to dramatically reduce the amount of local sports talk in several markets. Vancouver has a competing all-sports station in Sportsnet 650, but Winnipeg does not; 680 CJOB carries some sports, including the NHL’s Jets (which they only recently acquired from TSN 1290) and the CFL’s Blue Bombers, but is mostly a news/talk station. Hamilton also doesn’t have another all-sports station, although news station 900 CHML carries some sports, and Sportsnet The Fan 590 from Toronto is nearby. But these stations in Vancouver, Winnipeg and Hamilton were important for many, especially CFL fans; all three had rights to their local CFL team’s games, and all three regularly talked CFL outside of games, something that the Sportsnet radio stations in Canada often don’t do. So that’s a particular blow to that league and its fans, on the opening day of CFL free agency no less.

It’s also worth noting that this comes shortly after Bell’s annual #BellLetsTalk campaign to promote mental health, an incongruency many (including O’Toole) pointed out amidst their earlier cuts. The company’s donations there are impressive, but it then doesn’t look great for them to turn around and axe a ton of their employees (210 by a The Hollywood Reporter count last week; the count seems to have risen since then). And that’s especially true when the company itself took major federal funding last year and boosted its dividend to its shareholders, as 3 Down Nation’s Drew Edwards noted last week:

So, Bell Media layoffs. The parent company took $122M in COVID wage subsidies. They have $5.2 billion in "available liquidity." They're upping their Q4 dividend. That social media hashtag for mental health is a crock: they care nothing for people, never mind media or democracy.

And the company’s Q4 net earnings were just fine:

Bell released its fourth quarter and 2020 financial report five days ago. From their own news release, "Net earnings increased 28.9% to $932 million in Q4."https://t.co/hH31yTpQpE

Oh, and they drew the third-most Canadian viewers ever for Sunday’s Super Bowl:

And for some context on how TSN 1040 in particular was doing, here are Q4 numbers from Adam Seaborn.

In light of the recent TSN 1040 news. Some ratings context

So the TSN 1040 numbers weren’t great, but they were comfortably ahead of the competition, and that’s in the only one of these three markets where they had competition. And Q4 last year is particularly weird, as it came with no NHL thanks to the pandemic-shifted schedule and no CFL thanks to the postponed season, two key sources of talk for those stations. (On the NHL front, the Canucks are currently 6-10-0, and that isn’t great for local sports ratings either.) So these ratings weren’t awful, and they were ahead of the competition, and they would seem to be from an explainable low point rather than a more normal point for the station.

There are still existing TSN Radio stations in Edmonton, Montreal, Ottawa and Toronto. The latter three of those have local NHL rights, but Edmonton does not (630 CHED does). But their future also looks a little more uncertain in the wake of this decision.