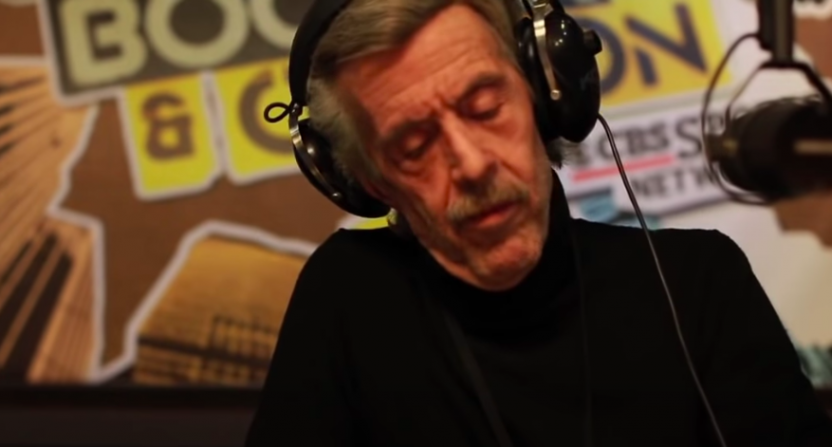 They don’t make them like Steve Somers anymore. If you grew up loving sports in New York City, you know his name. More importantly, you know his voice. When on the air, Somers sounds like an old friend: warm, comforting, and always with a sly sense of good humor. There’s a reason his nickname is The Schmoozer.

Unfortunately, NYC radio is going to be a little less cheerful soon. Somers, one of the founding personalities in New York sports talk, is leaving WFAN at the age of 74. He’s the network’s last remaining original host, and has been with the landmark station since its inception in 1987.

According to Neil Best of Newsday, Somers’ final full show will be Friday from 11 p.m. to 2 a.m ET. On Monday, WFAN will also air a special program from 1 to 2 p.m. as Somers ends his full-time gig. It’s “so long,” but perhaps not a permanent goodbye. He may return for fill-in shifts and special events.

Somers didn’t want a “farewell tour” but acknowledged the outpouring of love and well-wishes. So many reached out to pay tribute to a beloved figure.

“It’s been a blessing,” he said. “It has been an honor. It is flattering. It’s been all the above.”

Somers’ self-deprecating manner and soothing tone helped him connect with his audience and survive decades in a medium that can be a tough business. Somers is a slight contradiction, a broadcasting icon who never quite achieved the national prominence of his more famous former coworkers like Mike Francesa, Chris “Mad Dog” Russo, or Steve Levy.

“In many ways, Somers has been the antithesis of the ‘all-knowing’ hot takers.” – Clicker (born to do this) nails why The Schmoozer is not only venerable but beloved. https://t.co/Wr4uqJR63z

When Somers started at WFAN, the idea of 24-hour sports talk seemed as revolutionary as sending a man to Mars. Program directors were vexed, wondering how they were going to fill all this airtime. Would anyone listen? It sounds ludicrous now, but round-the-clock sports radio was a gamble. This was far riskier than ESPN, which began broadcasting in 1979. WFAN was local radio, not national cable TV.

To help make WFAN the success it is today, Somers pitched in wherever he could over the course of decades. Think of him as a utility player in baseball, contributing in various roles. But Somers is best known for working at night, often late evenings, sometimes overnight. When he began, his shift was midnight to 6 a.m.

“Somebody at 2:30 in the morning talking to people about sports seems absolutely insane,” Somers told RadioDocs.TV.

However, New York City never sleeps. There’s always something going on somewhere. Many people are working graveyard shifts in various industries: transportation, food, entertainment, etc.  There are night owls, insomniacs, and early risers too. Sometimes they were by themselves and needed to hear a friendly voice. Someone to make the hours go by a little faster, make the evenings/mornings a little more bearable.

In that space, Somers carved out his niche. He called his brand of broadcasting “schmoozing” and the label caught on.

He would famously say: “Schmoozing a little bit of the S-P-O-R-T-S, overnight and under the covers until Imus in the Morning at 6.”

Sure, Somers spoke about the Mets and the Yankees, the Jets and the Giants, the Knicks and the Nets, the Rangers and the Islanders and the Devils. Plenty of sports teams. Plenty to talk about. But Somers was different.

What set him apart was the way he bonded with listeners. He didn’t sound like your run-of-the-mill gasbag. He knew conversations were a two-way street. He gave his callers an opportunity to speak. Even when he poked fun at them, it rarely came across as mean or condescending. He understood that the true value of sports was getting people who might not have much in common to connect with each other.

In a sports universe that has devolved into a hot-take world, Somers spoke with a compassion and understanding that was refreshing.

“I don’t think a radio station could be more personal or more intimate with the listeners and callers than this one, and it’s probably more so late at night,” Somers once told The New York Times. “At night, you get the people who depend on radio a little more.”

He endeared himself to others by not taking himself too seriously. Quirky enough to read Green Eggs & Ham on air. This is how Somers built his audience, a community of enthusiasts ranging from the ordinary to Jerry Seinfeld (“Jerry from Queens”).

Somers’ success story might be nearing its end. That’s sad to hear and even sadder to write. Opening his show, Somers routinely introduces himself by saying “Steve Somers here. You there.”

After Monday, he may not be there for us anymore. We might have to learn to schmooze without him.