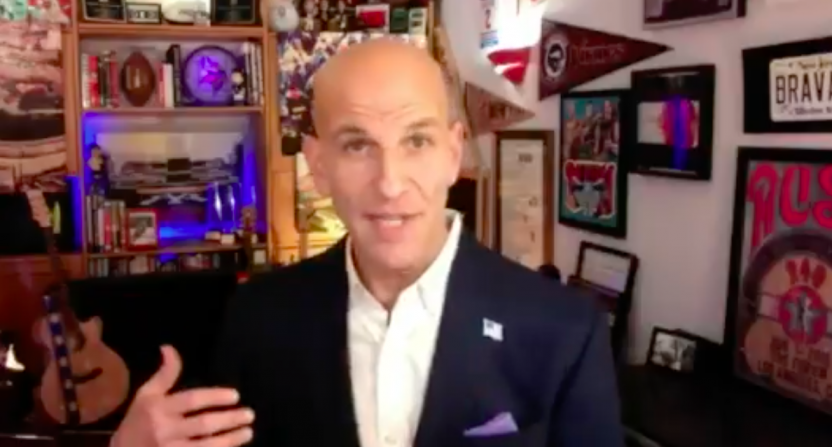 On May 19, 2011, ESPN 1050 radio host Jared Max was wrapping up his morning show in New York when he suddenly announced that he was gay. While there had been other prominent sports figures to do so at this point, we still weren’t at a point where LGBTQ+ people could expect to be celebrated in the world of sports (perhaps we’re still not?). Doing so was a major risk, especially in the aggro world of sports radio.

You can listen to the seven-plus minute announcement here:

At the time, Max told his audience that “I’m taking this courageous jump into the unknown having no idea how I will be perceived.” Ten years later, Max says his only regret was not saying it publicly sooner.

“I remember doing it thinking, ‘You know what? I’m allowed to tell this story,’” Max recently told Alex Reimer on The Sports Kiki podcast.

“Before I came out, I think I was failing,” Max said. “All of a sudden, becoming a talk show host wasn’t working. But once I was honest with the audience about who I am, I realized, ‘Okay, now I can talk and I can react at work.’”

At the time, Max was an up-and-coming radio personality who had just jumped from WCBS-AM to ESPN Radio. While he certainly could have continued on that path without making his sexuality public, the decision to come out eventually became too strong to deny. The tipping point was, of all things, reading an interview that Charles Barkley had recently done about gay teammates.

“(Barkley) was a big, important voice,” Max said. “People don’t always realize, but sometimes you can make an innocuous comment that can harm somebody, but you can also make a comment — that even Charles Barkley didn’t know — can change somebody’s life.”

Here’s what Barkley said at the time:

“First of all, every player has played with gay guys,” Barkley told 106.7 The Fan, adding that any player who says he hasn’t is “a stone-freakin’ idiot.”

“It bothers me when I hear these reporters and jocks get on TV and say: ‘Oh, no guy can come out in a team sport. These guys would go crazy.’ First of all, quit telling me what I think. I’d rather have a gay guy who can play than a straight guy who can’t play,” Barkley said.

Barkley said he never worried about awkward situations involving gay teammates, because “[It] doesn’t work like that.”

“A guy is never going to put himself in that situation in a professional locker room,” Barkley told the station. “It never crossed my mind, and I never felt any different about the guy.”

That, coupled with other prominent sports figures such as NBA Hall of Fame executive Rick Welts saying similar things, gave Max the impetus he needed to come out.

What was it like to come out of the closet on a live sports talk show 10 years ago? It wouldn’t have happened then without the act of courage by Basketball Hall of Famer @RickWelts ? Thank you @JonSchwartz1 for hosting this special Sports Mentoring Project. WATCH THIS SHORT CLIP https://t.co/edoD1z5hgr

Max has been a sports reporter for FOX News Headlines 24/7 since 2015 and makes appearances on Fox News and Fox Business to discuss the stories he reports on.

Love the love @CydZeigler you share every day. And, forever grateful for your support — helping me. Hopefully, it’s helped others. ? https://t.co/cN9ijt2qiu

As for whether or not he has any regrets about the announcement beyond wishing he’d done it sooner, he has none.

“You start small, but it is a jump off the diving board,” he said. “But in my experience and looking back 10 years later, it’s the same thing as I felt that day. ‘God, that was easy.’”