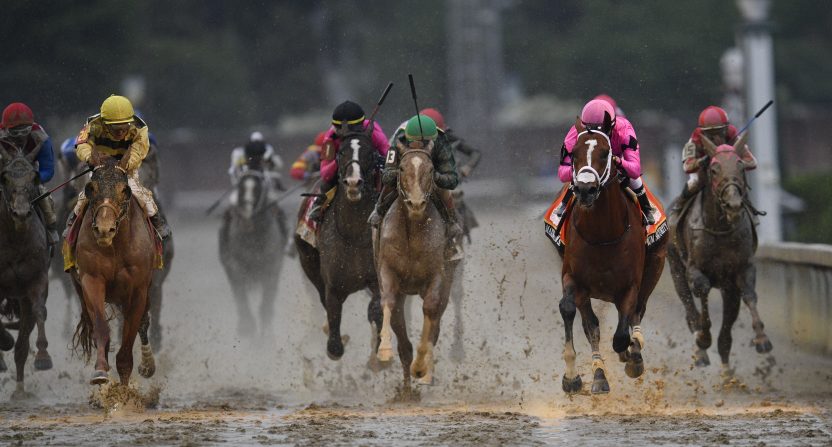 Maximum Security, the horse famous for coming in first, yet losing the race anyway. In 2019, the crown was infamously snatched away from him after a certain victory. Will Maximum Security get a second chance in 2021?

In short, no. Fans can put away their banners, as Maximum Security was recently retired to stud. His career met an end with little fanfare, placing him fifth in the Breeders’ Cup Classic in November last year.

Maximum Security had a stellar career however, winning 10 of his overall 14 starts.

How Did Maximum Security Lose in Kentucky Derby 2019?

Maximum Security was involved in one of the most agonizing finishes of Kentucky Derby history. In 2019’s nail-biting edition,he seemingly won the sport’s most anticipated race in under two action-packed minutes.

The celebrations were short-lived, however, as the pre-race favorite (he was amongst the top contenders, at 9-2 odds) would soon see the results of the race turned upside down.

Instant replay showed that the objection placed by Country House, the second-place finisher, was legitimate. After what seemed like a never-ending wait of 30 minutes, the results from officials came in: Maximum Security was the first “winner” of the Kentucky Derby to be disqualified. Instead, Country House, the 65-to-1 outsider, walked away with the title.

The circumstances of the end of the race were absolutely unique, full of agonizing suspense, speculation, and controversy. Maximum Security seemingly had the race in the bag, leading for almost the entirety of it. However, he technically violated strict interference rules, leading to War of Will, Country House, and Long Range Toddy to the forced altering of paths.

The eventual result was not welcomed by many pundits, and it even got as far as the White House. Donald Trump infamously tweeted about it, calling it “political correctness” gone into overdrive. His conclusion? The best horse did not win the Kentucky Derby. It seems that when it comes to video replay, it’s a partisan issue.

The story didn’t end there, however. After the race, owner Gary West filed an appeal with the state racing commission (even though they are technically not subject to an appeal).

After a hard-fought battle that went all the way to the federal appeals court, in August 2020 (over a year after the original race!) a three-judge panel finally decided in favor of the original decision. As the judge aptly remarked, what should have been a quick two-minute race ended in over a year of litigation.

Despite questions remaining, the ultimate result was probably fair on balance. The call was made by three independent stewards who have never been part of the controversy. And when viewing the video replay, it’s clear that on a technical level, Maximum Security did obstruct the others in the race. Following the letter of the law, the disqualification was the only option.

The drawn-out litigation process dominated the news around Maximum Security, which is a little unfair to the subsequent results the horse enjoyed.

February 2020 was approaching and with it the world’s richest race – Saudi Cup 2020, the event that shocked the audience. 14 horses entered the race, but it was Maximum Security, trained by Jason Servis and ridden by Luis Saez, that galloped to victory. It took first place with a $10 million worth prize, being correctly priced as the 3.50 favorite by the bookies in the region before the race.

This was a landmark event for Saudi Arabia, as both the scintillating performances and the investment into the race massively increased the popularity of horse racing and betting. Racing is now undoubtedly one of the more popular sporting events to bet on in the region, and experts predict it will only gain in viewership in the coming years.

Maximum Security was clearly an exceptional racehorse, win or no win at the Kentucky Derby. He is still considered by many as the legitimate winner of the race, despite the technicality that snatched the title away from him.

Instead of donning his racing garb, his future stands in Versailles, Kentucky, at Ashford Stud, where owners Gary and Mary West will make him available for a $20,000 breeding fee. Considering his impressive build, exceptional results, and affordable price (Authentic, who won the 2020 Derby as well as the Classic, is available for a fee of $75,000, for example), Charlie O’Connor, the Ashford director of sales, is confident that breeders will flock to Maximum Security.