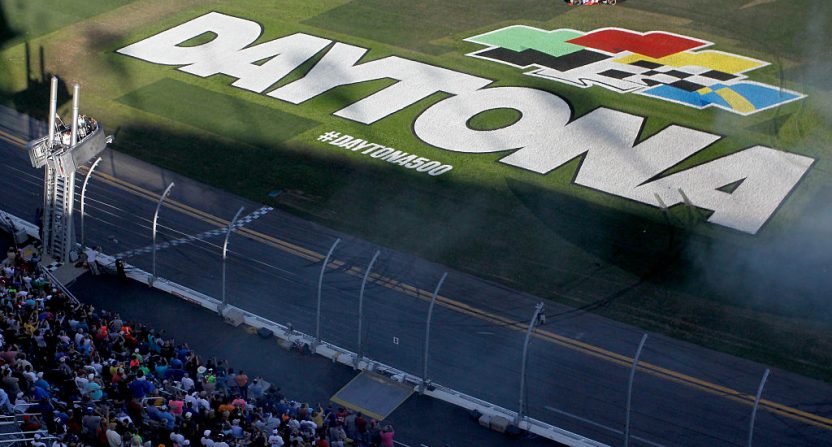 With this week’s Daytona 500, NASCAR begins a new era with races broken up into three stages before declaring a winner. It’s a revolutionary idea that goes back to the sport’s short track, roots but also provides more “winning moments” in the hopes of drawing more fans for longer period of time to tune into the races.

In short, NASCAR had to do something this offseason with its ratings slide showing no signs of slowing down. 22 of 29 Cup races declined in ratings, continuing a viewership freefall that stretches back for the better part of a decade. Just how bad has NASCAR’s tailspin been? They’ve lost almost half of their audience since the sport’s peak in the mid-2000s with a 45% dip since 2005.

There are many theories surrounding why NASCAR’s ratings have fallen so fast and so far compared to other sports. There’s drivers that might not connect as well as their predecessors, constant rule changes and tweaks that make the sport tough to follow, inconsistent start times for races, over-expansion to new tracks in non-traditional markets, a recession that hit traditional NASCAR fanbases with more lasting impact than others, and the fact that there’s more television options than ever before.

No matter how NASCAR got in this situation, it’s the fact that it’s been so difficult to try to get out of it that is most concerning. Every year, one thinks NASCAR ratings have bottomed out, they seem to dip lower.

With NASCAR reaching its breaking point, it’s no shock to see such a bold move in the fundamental change to how races are structured from green flag to checkered flag. In actuality, though, it could be just the beginning of sweeping changes to a sport desperately in need of positive momentum.

One of those insights WSJ reports is NBC executives pressing NASCAR to do something drastic to reverse the ratings decline, which led to the thinktank meeting that produced the idea to race in stages. With the networks paying hundreds of millions of dollars for NASCAR television packages and the races likely not producing the ratings anticipated, NBC and Fox are pushing hard to get a better return on their investment than they’re currently receiving.

Another even more substantial evolution proposed by NBC would be to move some NASCAR races to the middle of the week in primetime to move away from the NFL on Sundays.

Remember this one? #DAYTONA500

Only about a third of the NASCAR season goes head-to-head with the NFL, but it is indeed a killer on the ratings. The NASCAR Chase/Playoff that takes place during the fall should be the climax of the season when more people are tuned in, but that’s not the case. NASCAR averaged 4.6 million viewers last season and yet only the final 2 races in the Chase at Phoenix and Homestead managed to crack 4 million viewers.

Were NASCAR to run their playoff races in primetime on a Tuesday or Wednesday night they could own one night of the week during the fall. (If this discussion sounds familiar it’s the same idea that’s been bouncing around MLS for quite some time in getting away from competing with the NFL) Not only could that help push more viewers to NASCAR, it could also help improve the primetime ratings of their cable partners as well.

Naturally, there is a downside to the idea of more midweek races, namely attendance. As ratings have declined for NASCAR so have butts in the seats. If races were to run on a Tuesday or Wednesday night, it would almost kill any hopes of getting sellout crowds to the track. And what about other events like practice, qualifying, and the X-Finity Series? How many fans are realistically going to show up for a Tuesday afternoon X-Finity Series race at Dover?

While NBC’s Jon Miller told the WSJ that the midweek idea isn’t on the table for now, the mere mention of it does show just how desperate all parties involved truly are to find a solution here.

You can bet everyone associated with NASCAR will watch the television ratings very closely this season. If ratings continue to slide despite the transformational changes of racing in stages and constructing more designed breaks in action to better suit television viewing habits and fan interests, NASCAR will have to go back to the drawing board and come up with something else in order to win back fans. And it might have to be something even more drastic than what we will see this season.