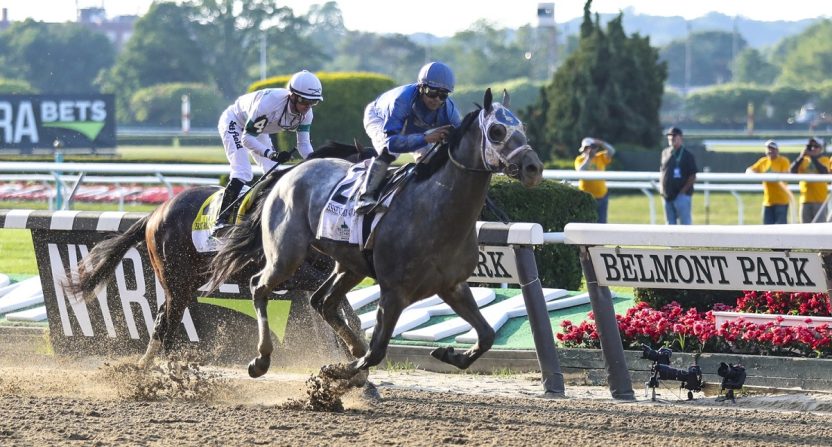 Betting on horse racing can be so exciting. There’s not too much to beat the excitement of cheering your selection home. It’s definitely better than the Slime Cup that is for sure. Every year, the US horse racing calendar promises some great races. Let’s look at the best five that can be seen this year.

While racing in England has the five Classic races (1000 Guineas, 2000 Guineas, Derby, Oaks, and St. Leger) to bet on, the US has the Triple Crown. The first of these three races is the Kentucky Derby, which this year takes place on May 7.

This race is for three-year-old thoroughbreds and was won last year by Medina Spirit (who sadly died later in 2021). It’s run on dirt over a mile and a quarter at Churchill Downs. Sportsbooks currently have Smile Happy as the favorite to win in May.  This runner won the Grade 2 Kentucky Jockey Club Stakes last November

One horse that could upset the odds is Charge It. This contender won over a mile at Gulfstream Park last December and will hope the extra distance in the Kentucky Derby will bring about further improvement.

If you want to place wagers on horse racing, find out the best offers and who may be the winners according to horse.bet.

This is the second ‘jewel’ of the Triple Crown and run at Pimlico Race Course in Baltimore, Maryland. Whoever wins the Kentucky Derby may well give its backers another chance of glory, by running in this race. The Preakness is run over nine-and-a-half furlongs on dirt. Colts, geldings, and fillies can take part.

Last year saw betting on Rombauer to win the Preakness prove to be a great decision. This year the Preakness takes place on May 21, that’s just a fortnight after the Kentucky Derby. The relatively short gap between the races is why sportsbooks believe winning the Triple Crown is so difficult. It was last won in 2018 and only twice in the past 44 years.

June 11 is the date for gamblers to put in their diaries. That’s when the final ‘jewel’ of the Triple Crown takes place. This is held at Belmont Park and is run on dirt over a-mile-and-a-half with colts, geldings, and fillies eligible.

If a horse such as Early Voting is to win this and complete a Triple Crown, then bettors will have to hope the runner can last out the distance. Early Voting has had two wins so far but never gone beyond nine furlongs.

One the Triple Crown races are over, there are still some great American races to bet on. The biggest races are at the start of November. Gamblers adore the two-day Breeders’ Cup meeting and so do those who win the races with millions of dollars on the line. This year the event takes place at Keeneland on November 4 and 5 with this race on the second day.

The Breeders’ Cup Classic is a weight for age Grade 1 race run over a mile-and-a-quarter on dirt and is open to runners aged three years and over. Previous winners of the race include Triple Crown winner American Pharoah and in 2021 it was run by Knicks Go.

Sportsbooks fancy the chances of Life is Good who won the Breeders’ Cup Dirt Mile last year. Life is Good has been successful in five of its last six races. 2022 began with success in the Pegasus Cup Invitational Stakes, held at Gulfstream Park on January 29. Second in that race was the 2021 Breeders’ Cup Classic winner Knicks Go.

Hot Rod Charlie finished fourth in this race last year. 2022 has already seen success in a Grade 2 race in Meydan. Another bold bid will be made to win the Breeders’ Cup Classic this year.

So far, the races mentioned have been run on dirt, but not this one. It also takes place at Keeneland on November 5 and is run over a-mile-and-a-half on turf and is a weight for age thoroughbred contest. The race may be held in the US, but recent years have produced plenty of success for European runners.

The distance this race is run over is the same as for top European races such as the Epsom Derby, Epsom Oaks, and Prix de L’arc de Triomphe. Last year, those betting on the British runner Yibir spent the night celebrating a win. Yibir followed in the footsteps (hooves?) of winners such as Enable and Tarnawa.

Six of the last seven winners have been European raiders. The last US winner was Bricks and Mortar in 2019. November is a long way off but keep an eye on UK, Irish and French racing results this summer for vital clues on who to bet on.