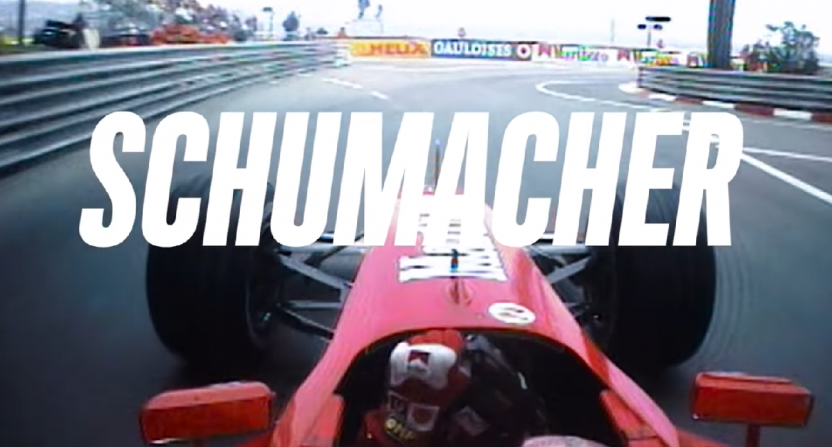 Watching Schumacher is an exercise in cognitive dissonance.

For most racing documentaries that feature appearances from everyone but the main subject, the reason is obvious: they’re not alive to tell their own story. From Dale Earnhardt Sr. to Ayrton Senna (who features prominently and poignantly throughout Schumacher), the idea of a legend giving his life on the track is ingrained, and seeing a film with a driver’s friends and family discussing heroics and life at home in the past tense triggers that same feelings in a viewer.

Those watching who are completely unfamiliar with Michael Schumacher’s story might indeed be expecting that to play out. Netflix has brought plenty of new people to the world of Formula 1 via the excellent Drive to Survive, and the Schumacher doc offers some of the same inside access, albeit from a completely different era of the sport.

In some ways, then, the documentary works on two levels; the foreshadowing is tragic for those who both know and don’t know what happened to Schumacher in the French Alps after his second retirement.

The documentary is also a combination of the modern Formula 1 docuseries and The Last Dance; the archival film footage is stunning. There might not be a better time and place for Technicolor than Formula 1 in the 1990s, watching a rookie Schumacher shoe the 7Up livery Jordan around Spa in 1991.

The involvement of the Schumacher family (wife Corinna and son Mick, a current F1 rookie, make the strongest impressions) would seemingly foretell a film focused more on Schumacher off the track, but it’s actually more concerned with the heights of Schumacher’s on-track career. There are sections on Schumacher’s rivalry with Senna, tragically cut short by the Brazilian’s fatal accident, shown in the film in a jarringly powerful and horrifying moment, accentuated by archival footage of Schumacher talking about how he assumed Senna would just be in a coma from which he could recover.

There are also moments of outright lyricism. The opening and closing credits are static onboard camera shots of Schumacher traversing the Monaco circuit, and they alone might be worth watching the film for. They capture the poetry and power inherent to the sport at which Schumacher was better than just about anyone else to ever do it. In the middle of the film, a brief tracking shot follows Schumacher chasing Mika Häkkinen in the wet. It’s an evocative few seconds, suggesting a shark hunting prey in the open water.

Schumacher isn’t hagiography, either. Some of Schumacher’s more controversial moments (especially the pretty obvious attempt to wreck a rival to seal a championship, which led to Schumacher being retroactively disqualified for the year in 1997) are given as much time as his run to five straight titles at Ferrari to start the millennium.

That even-handedness helps lend the positive moments more weight, especially the concluding section which features the Schumacher family discussing Michael’s current state, and how they continue to support him in ways the public will never know. That’s by design, too; those who knew the story going in may have hoped for a bit of positive news or update, or even just a definitive clue as to Schumacher’s current condition. Those who were introduced to Schumacher via the film would certainly be curious after nearly two hours.

It’s not a spoiler, really, to note that we don’t get much resolution there. But what we do get is immensely powerful, sad, and hopeful, all at once.