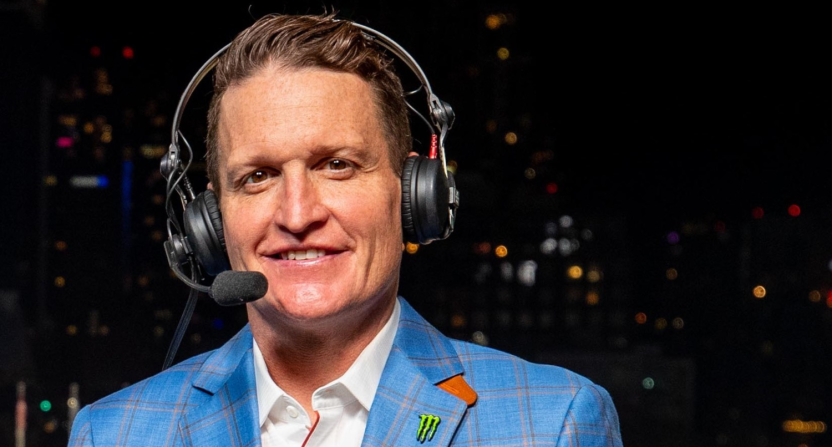 Ahead of this week’s announcement of the 2023 schedule and broadcasters for the new SuperMotocross League, one of those broadcasters took the time to talk to AA about what he expects to see this coming year. That would be Ricky Carmichael, who has a long history in both motocross (outdoor offroad circuits) and supercross (circuits, usually in stadiums, with steeper jumps and obstacles).

As a competitor, Carmichael initially set a ton of amateur records, including nine AMA amateur national championship titles and 67 overall amateur motocross titles. He then turned pro in 1996, earning the AMA Motocross Rookie of the Year award that year, and won his first of 15 AMA national championships (motocross and supercross) in 1997. Carmichael’s 150 combined motocross and supercross wins remain a record.

Following his 2007 retirement from motocross and supercross, Carmichael then moved into NASCAR competition in various series from 2008-2011. He was inducted into the Motorsports Hall of Fame of America in 2015. Since then, he’s been doing lots of broadcasting. That includes joining the AMA supercross broadcast team in 2018 as a part-time trackside analyst and color analyst and then moving into the broadcast booth full-time as an analyst in 2019 when those broadcasts moved from Fox Sports to NBC Sports. He told AA he’s loved his time in broadcasting to date.

“It’s been a lot of fun. It’s been an incredible journey so far. And the growth that I’ve been able to make alongside some great play-by-play guys, Leigh Diffey and Todd Harris just to name a couple, it’s been fun. I love sharing my knowledge with all of our viewers and sharing stories. Every year I continue to grow, and I have goals where I want to improve, and share more and more of my knowledge with the viewers that may not know so much about supercross and motocross and the disciplines and what comes along with that. It’s been fun, it’s been a really fun challenge, and I’m thankful for the opportunity.”

Carmichael said broadcasting is sometimes even more challenging than racing, though, particularly with the speed required to get insights out while other action is still happening.

“I will say sometimes it’s a lot harder on this side of the handlebars than it was behind the handlebars. I think the biggest thing is, in our sport, everything happens so fast, and [you need] to be able to get out what you need to get out in a short amount of time before something else happens. I would say for me that is always the biggest challenge, telling the story, hitting the points so our viewer knows exactly what I’m talking about and can relate and parallel that with real-life situations, whatever that might be, giving examples of ‘Hey, this is what this guy is thinking,’ or ‘Imagine driving your car in this kind of situation,’ paralleling situations for our viewers and doing that really, really quick.”

“That is the challenging thing about our sport; we don’t have much time for replays because everything is live action happening so fast. A comparison would be like football, they do a play, the play-by-play guy calls the play and the analyst goes over how the play happened and what happened while they’re getting ready for the next down. So that’s the challenge. But it’s a fun challenge, and it keeps you sharp, man.”

Carmichael has dabbled in stock car broadcasting too, and has enjoyed that. But he said calling motocross and supercross feels natural for him given his longer experience in the sport.

“I did an Xfinity race on NBC Sports at Darlington in 2021, so that was a great opportunity, and I really had fun. It was fun to work with different producers and how they do things on the NASCAR side of things. That was a great experience, and I’m really thankful for that opportunity. But I think [supercross and motocross] was just a natural flow, especially at the beginning. It was the most natural opportunity that I could get, a natural segue, being able to be an analyst in the sport that I competed at the highest level in and have the most knowledge in compared to, say, four wheels.”

He said he’s particularly thrilled about this new SuperMotocross League and World Championship, which will combine motocross and supercross in a new season-long way.

“I really, really am excited about the SuperMotocross World Championship for several reasons. Number one, it’s bringing motocross and supercross all in one. I love the two organizations, Feld Motorsports and AMA Sports, coming together, the unity. And I love our media package; all the events, both supercross and motocross, being live on Peacock, live streaming, I think that is huge for supercross, motocross, and the SuperMotocross World Championship, the three playoff rounds. I love the integration and the two owners coming together making it as one, I think that is a great opportunity for growth.”

Carmichael said the playoff setup (two playoff rounds at the end of the season, then the championship, with seedings based on both supercross and motocross performance) is particularly exciting. He thinks it fits with what’s worked well in other sports, and will also reward versatile riders and teams.

“Now, because of the three-race playoff system at the end of the series, the better you do in supercross and that championship, the better you do in motocross and that championship, it gives you a better-seeded position going into those three playoff rounds. So it forces those guys to really have to be good and perform at the highest level so they go through these playoff races in the best position possible.”

Carmichael competed in both disciplines, but won even more in motocross than he did in supercross. But he said he thinks it’s a great idea to combine the two and reward the riders and teams who can do both well.

“I’m a supercross and a motocross guy, but I had a lot more success in motocross. I love the hybrid system, the hybrid-style tracks that we’re going to see in the playoffs, the SuperMotocross World Championship, those three rounds there. I think it’s something new, it’s exciting. I love how it’s going to challenge not only the riders, but the teams. And what I mean by that is because it’s a hybrid track, maybe 50 percent supercross, 50 percent motocross, the bikes are going to have to be different. They’re going to have to have somewhat of an intermediate setup, something that works good enough in supercross and good enough in the motocross portion of the track.”

“It’s exciting, it’s certainly something to talk about. And what I think you’re going to see is you’re going to see some adjustments going on. I really do believe that from round one to round two of the playoffs, and then obviously for the final round, that championship round at the L.A. Coliseum [on Saturday, Oct. 14], it’s going to be a lot of fun to see just which program can adapt to this new style racing with the hybrid supercross/motocross track. There’s a lot to talk about, and I’m excited for it. It’s going to be interesting.”

Carmichael said the consistent broadcasting setup this year, where every race will be streamed live on Peacock in the U.S. (with some airing live on linear NBC networks as well, and next-day encore showings of all races on CNBC) will also help this take off further.

“And from the media package, I think it gives our fans, and potential new viewers and fans, the opportunity to watch this whole season go on and then a three-round playoff system. It’s a 31-race series, and it is the most prestigious form of offroad racing in the world, and I’m glad that we get to broadcast it live, with every single event on Peacock.”

He thinks the consistent streaming (on Peacock in the U.S., and on a full consistent SuperMotocross Video Pass package in partnership with Endeavor Streaming for international viewers) is one of the new league’s greatest assets.

“I just keep going back to our media package and being able to stream all of these events live on Peacock. I think with our demographics and what this sport brings, the age group and what it’s about, I think it really fits in nicely to the streaming world. And make no mistake about it, I think we all know streaming is the future, and I’m glad that we are on the better side of it. I’m really excited, I think it’s a great partnership, and I’m so happy that I get to be a part of it.”

The supercross portion of this Super Motocross League begins on Jan. 7, with the motocross portion beginning May 27 and then that combined championship Oct. 14. A full broadcast schedule can be found here.