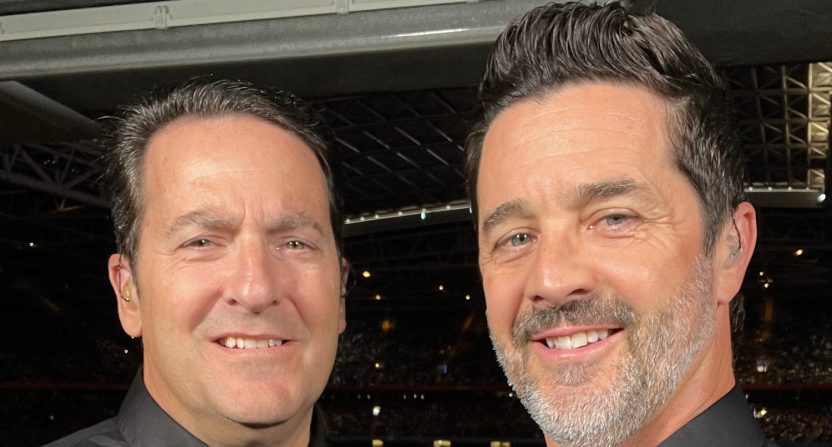 Over more than three decades in motorsports TV, Ralph Sheheen has worked on a lot of different projects across series, from Formula 1 to the Daytona 500 to NASCAR to motorcross. He’s now calling the new FIM World Supercross Championship series alongside Jeff Emig (seen at right above with Sheheen). That series debuted this month with two pilot rounds, including one race on Oct. 9 in Cardiff, Wales, and then this weekend’s Australian Grand Prix in Melbourne.

In the U.S., live coverage of the Australian Grand Prix race itself will air on FS2 beginning at 4:30 a.m. Eastern Saturday. The series will have a fuller 12-round series in 2023, with Fox Sports also attached as a partner there in addition to the series’ own streaming channel, WSX.tv. Sheheen recently spoke to AA about the new series, and he said it’s been a career highlight for him.

“It has been arguably one of the most exciting projects I have ever been a part of in my 30-plus years on national television,” he said. “Any time you’re working on something that’s a big-time broadcast, that’s exciting in itself, which this obviously is. We’re doing live television to the world. That’s very exciting. It’s a big-time production, it has all the big-time elements as a part of it. On top of that, it’s a true world championship; that adds massive significance to it.”

Sheheen said it’s also a thrill to get to be involved in something from the start.

“And then on top of that, it’s the first time ever, so you get to kind of help craft what this championship is going to look like, what it’s going to sound like, how it’s going to be interpreted by fans and the industry. So you get to have a little input into shaping it, and that is a lot of fun.”

He said the World Supercross Championship stands out from some previous supercross series because of its commitment to hold races around the globe.

“The thing that stands out the most is the thing that’s the most obvious, and that’s that it’s truly global. Supercross has been a massive hit here in the United States, and in North America, because it’s had great success in Canada as well. And there have been flirtations with trying to do a world championship. The U.S. championship was considered a world championship type, by producing a couple of rounds in Canada, but they never went around the globe like we’re doing.”

“And there were some other groups that took independent races that would take place in the offseason and tried to tie them together to make a world championship out of it. But it just wasn’t the same as this, where it’s just like Formula 1 or MotoGP or World Superbike, where it truly is one organization putting on the events and scattering them literally all around the globe in every continent and making a real world championship out of it. That in itself just separates it from everything that’s happened in the past.”

Sheheen said this stands up well against the other things he’s done, and the production crew has been a big part of that.

“I’m in my 34th year on national television, and through that time I’ve literally done everything from swamp buggies to Formula 1. I’ve done the Daytona 500, I’ve done all the major sprint car shows and drag racing shows, MotoGP and Formula 1, all these different things, I’ve worked at the Indianapolis 500. I’ve seen all the biggest and best events there are to see in this country, and I have worked on some events from around the world as well, but this has really been very, very exciting.”

“The production crew that we work with out of Australia that is producing all these, it’s very similar to what Formula 1 and MotoGP does where they have their own TV production group in-house and they’re going to travel them around the globe. …It’s been fun to work with this group out of Australia, to see how they do things. They’re incredibly professional on every aspect they do, whether it’s producing the event or producing the television.”

And he said supercross is a particular favorite event for him, with its top venues being part of that.

“People always ask me, and I’m sure every broadcaster gets this, ‘If you could do one more event in your career, which one would you go back and do again?’ I always tell people, ‘If I could do one series all over again, it would be supercross.’ Supercross as a sport is just one of the most exciting forms of motorsport I’ve ever seen on a week-to-week basis.”

“At the last race we did, we were in Principality Stadium in Cardiff, Wales, the home for the Wales rugby union national team, one of the best rugby teams in the world. It’s a beautiful stadium, very similar to any of the top stadiums in the U.S. This week, we’re at Marvel Stadium in Melbourne, Australia, another stunning facility. So you’ve got everything there that makes it a big event, gives it a big event feel.”

Sheheen said one of the largest appeal of supercross for him is the uncertainty with the start, which can cause problems for even clear favorites.

“The way that the racing goes, it is so aggressive. And the fact that they line the riders up lengthwise in the gate, when they drop that gate, they have to funnel down into that first corner, it just provides chaos every time. And chaos is perfect for excitement and a great race because you never know what’s going to happen.”

“You can sit there and go ‘Well, Ken Roczen’s been fast all night, he’s going to win this.’ Then they drop that gate and Ken gets caught up in something, and all of a sudden, he’s in the back of the pack trying to race his way through. And that’s thrilling because a rider like Ken Roczen can make that happen, and as a fan, it’s fun to watch that take place. As a broadcaster, it delivers everything you hope.”

He said he’s optimistic this world championship will take the sport to even greater heights.

“And now we get to do it on an even grander scale with a world championship attached to it. Any time you add world champion to anything, it elevates the significance of what you’re doing.”

The WSX Australian Grand Prix will air live on FS2 beginning at 4:30 a.m. Eastern Saturday. More information on the series can be found at WSX.tv.