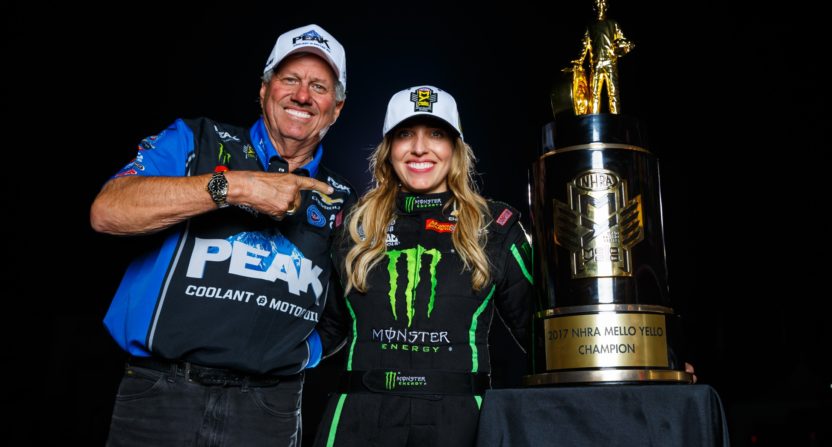 Since Fox Sports’ acquisition of NHRA drag racing in 2016, the sport has experienced a rise in viewership from from the years with its previous broadcast partner, ESPN. They averaged at least 600,000 total viewers for each of the past two years, up double-digit percentages from 2015.

With a new NHRA season beginning on February 8 in Pomona, California with the Lucas Oil Winternationals, I recently spoke with Ken Adelson, the Chief Content Officer, Vice President of Broadcasting/Digital, and Executive Producer for the NHRA to reflect on a successful 2017 as well as what’s upcoming for the sport in 2018 and beyond.

Could you offer a summary/recap of the past year within the NHRA and your partnership with Fox in general?

With Fox, it has been an incredible partnership and growth for the NHRA over the last two years. The numbers speak for themselves in many ways, but way beyond the numbers is the relationship we’ve developed with Fox.  We feel like we are a part of the Fox family — we promote other Fox programs, they promote us in a number of ways, including promotions on the NASCAR shows, which is terrific, based on the large audience that they have. We discuss everything on the programming side, on the content side and it’s led to a lot of this success.

The most notable event on the TV side were those NHRA Summernationals in New Jersey that drew 1.6 million viewers. And you saw a similar spike last year in Atlanta, resulting in 1.4 million viewers. Then, each of the subsequent races after New Jersey this past June got over a million viewers. What were the discussions behind-the-scenes as a result of those high marks — races that were on tape-delay but got a tremendous amount of eyeballs to watch them?

We really feel like we have a great product and have a great sport. This is a great beginning for bringing its awareness, because having the advantage of following the NASCAR races is definitely a big plus for us and we feel like that audience can then get exposed to the NHRA. We’ve done a good job of keeping a lot of those people, and that’s been a great part of the overall success of the relationship.

But the programming goes past that in the sense of trying to look for spots to wrap the Fox Sports 1 calendar that can maximize the kind of how many people we can reach. I think that we’ve also proven the product will be something that people that will enjoy and that will be great for Fox Sports 1 as well, because it’s bringing in new fans into an already very passionate fan base. It’s the complete year package that we do and we look at opportunities based on the programming.

NHRA is entering the third year with Fox. Is there a different approach from the Fox angle as to the promotion or production of the telecasts, compared to those of your previous broadcast partner?

We took a very different approach with the NHRA and the productions with Fox, in trying to showcase more of the entire event and the excitement that’s part of them which are very unique in terms of fan access, in terms of how close the drivers get to the fans. Every sense is touched at our events based on the sound and the speed — we want to bring more of that to the screen as well as more stories about the drivers, letting people know how talented and how unique these individuals are. So it’s creating a bigger picture of what the entire event is, how exciting it is to be there and trying to translate that excitement to the TV screen. We talk a lot more about the technology that’s behind what makes a car able to go 330+ miles per hour — something almost hard to conceive.

We’ve tried to make it a bigger show in terms of the breadth of how much we’re showing about the sport. We’re also helping people connect in a new way. Everything about our programming in the past was fine in the technical sense and in the way that the shows were presented were all excellent. But we’re trying to take it to different dimensions with showing more about the races, the excitement, getting different people involved in learning about these drivers, adding better time slots provided to us from Fox. There was concern about not the finest time slots in the final couple of years before Fox took the contract. In addition to NASCAR lead-ins, we have better programming time slots across the board and more re-airs, those of which in more good time slots across FS1/FS2 programming. This contributes to even greater exposure — the NHRA is really a part of that network. And then every time that the NHRA is on, it brings more people to the sport.

Recently, there’s been change at the top with Peter Clifford as CEO and Glen Cromwell as the new NHRA president. What are their thoughts or contributions on the television productions of the sport? Have they offered new angles?

We’re a very close team: Glen, Peter, and myself as well as key people in the management team. It’s very collaborative and very interactive from day one, which was one of the things I really liked — they see the benefit of being one organization. Taking this in-house is a huge undertaking with the NHRA and basically controlling your own destiny was a big part of it. Peter Clifford’s vision was what attracted me to be part of this and to be able to then help carry that out. Glen Cromwell has been part of that from the minute I got here as well, so this is a very smooth continuation of the way it had been. The whole company is incredibly supportive of these TV efforts including Graham Light, who is our Senior Vice President of Racing Operations and has also been with the company for a long time. So we’re all rowing in the same way, and that’s been from day one.

As Glen takes this position, he’s coming in with the support and enthusiasm for everything we’re doing. We’re just going to keep building on our path, to grow the sport and bringing this product to as many fans as we can.

Related to that note, what new aspects can we look forward to in the coming year for the NHRA?

We do have a few exciting changes this year.

Amanda Busick will take on a greater role, as she will be one of our reporters on all 24 shows this year and will also host our interactive web studio that we have in Glendora.

Bruno Massel, one of our longtime reporters and still a current racer in the Sportsman Competition Eliminator class, will be spending time in the broadcast booth with our main play-by-play announcer Dave Rieff and analyst Tony Pedregon forming a three-man booth. So we’ve got a great evolution of, again, this is just the growth and the evolution of the show, but I think the biggest thing that we’re excited about on the programming side is that we will no longer have shows on at 2AM on Saturday nights, which is a product of the busy Saturday sports schedule.

As an example of one of those collaborative efforts working together with Fox, we decided to take the one-hour time slot that is right before our three-hour shows on Sunday and create what we’re going to call “NHRA Today”, our new pre-game show that will also review the qualifying sessions that happened. This puts us in another hour in a much better time slot to succeed and use it as a launch to our main program. Much of our programming will be as live or live-to-tape as we can.

This new scheduling is going to provide more information at a better time for our fans and will also be a better way to reach more people. We’ve already gotten good feedback with the idea of “NHRA Today” for Sundays so we’re excited about that.

We’re not going to forget about our folks on Saturday because even though we would’ve been on TV very late, we’re going to take advantage of the relationship with Fox and we’re going to broadcast the end of the qualifying sessions on FOX Sports GO digitally and on NHRA.com on many of these Saturdays during the season.

So therefore, we’re going to use the digital world to be more immediate than we ever could be. And we think these are really good next steps in our continued growth.

About the sport itself, John Force is among the best known legendary names of NHRA. His daughter Brittany Force is making her own headway and had a historic year in 2017 becoming Top Fuel champion. Describe the fan feedback and the reactions to her milestone win.

We have an unbelievable, almost unsurpassed diversity in our sport, which is terrific for everybody. We have women that are champions on many weekends and they were racing on the same playing field as the men. It’s a great diverse group of drivers.

With Brittany winning the championship in a very exciting way on the last day of the season, it was just tremendous for the fans. That was a great storyline. We’ve gotten nothing but great positive feedback on that, which is a well representation of the sport. The Force family is obviously one of our great teams that race (as well as the Shumacher and the Kalitta teams) and what Brittany was able to do last year leads us to a lot of enthusiasm and excitement into Pomona when we start up again this week.