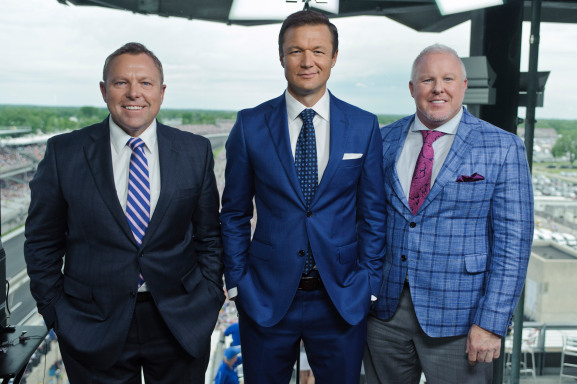 Prestigious races like the Grand Prix of Long Beach have been canceled for the first time in its 45 year history, while the Indianapolis 500 has been delayed until August 23. Nevertheless, IndyCar is set to begin again, starting with the Genesys 300 at Texas Motor Speedway this Saturday night at 8 p.m. ET on NBC.

After considering the currently light sports schedule, it was decided to move the race broadcast to NBC, making it the first time an IndyCar race will be on primetime broadcast TV since 2013. NBC sees this as an opportunity to reach a potential new audience or an existing audience that may have left due to the open-wheel split in the ’90s. Play-by-play announcer Leigh Diffey (seen at left above with analysts Townsend Bell and Paul Tracy) spoke to Awful Announcing about this, and discussed the opportunity presented by that channel shift.

“Our broadcast, we need to bring Indy 500 level excitement and enthusiasm because of this opportunity to go primetime. For NBC, this is a huge moment for us and a wonderful opportunity for the sport. And I’m really looking forward to… and I can speak on behalf of Townsend and Paul and our pit reporters this weekend, Kelli Stavast and Marty Snider… all five of us are looking forward to saying to perhaps those first-time viewers or returning viewers, ‘Hey, not only are they doing over 215 mph, these are great American and global athletes that you’ve got in these cars. Not only guys who can drive wheel-to-wheel at 215 mph, but they’re really articulate, they’re funny, they got senses of humor. They’re wonderful personalities, and by the way, you should get to know them because they’re worth listening to.'”

Despite the obvious visual that the stands will not have fans, NBC’s IndyCar broadcast will be different in many other ways. On top of the three-man booth employing social distancing and the pit reporters wearing masks, there are non-sports topics that NBC feels must be acknowledged on the broadcast. In addition to the pandemic, there have been nationwide protests against police brutality due to the killing of George Floyd. Executive producer Sam Flood told the media that he and Diffey will talk Saturday morning to figure out how to put things in proper perspective within an IndyCar broadcast.

“I think it has to be acknowledged for sure because it’s impacting so many lives, and starting with COVID-19, which anyone in the world knows about right now because it has been top of mind for 80-something days. And in terms of what’s going on across our country in terms of race protests and the rightful dialogue that’s coming from that, we will appropriately react to it and make sense of it.”

“Leigh and I were talking before the call; we are going to get together Saturday morning and have a dialogue about where we are because this story continues to evolve. The events from two nights ago were far different in this country than the events from last night. We have to see the evolution of the story and also the evolution of the COVID-19 story, and where we are when this begins. And that’s the job, and we’re fortunate to have Leigh who’s able to put things in proper perspective and words to handle a story and stories like this.”

There is confidence from NBC that Saturday night’s race will bring in high viewership for an IndyCar race. Last season, NBC had 1.1 million viewers for their Road America race, the network’s highest viewership for a non-Indy 500 race. In fact, because the Indy 500 is postponed to August, NBC aired an expanded replay of last year’s race that got 645k viewers, which is comparable to their live races on NBCSN and outperformed many other classic broadcasts in ratings.

With this being the season-opening race, that also leads into further broadcast topics. Drivers have had six weeks of televised iRacing competitions, and those have resulted in some fireworks, but this is the real thing. Diffey said there will be no shortage of storylines entering the 2020 NTT IndyCar Series season.

“The way that [defending champion] Josef Newgarden was last year was incredible. I’m keen to see if he carries that through. [Defending Indy 500 champion] Simon Pagenaud has been working so incredibly hard. Is this Alexander Rossi’s year? He’s got that Indy 500 victory from 2016, and it always seems week in and week out Alexander is one of those guys who is always, ‘Is this going to be the year?’ He’s getting sick of being the talked about in the championship hopefuls but not being the champion. And I think we all know that he could very well be the champion.”

“I think the IndyCar rookies, the new lineup at Arrow McLaren SP… how is that going to work out? The Indy Lights champions from the past two years [Pato O’Ward and Oliver Askew], there’s no set designated ‘team leader’, so how’s that going to pan out? We got new drivers to the series with Alex Palou from Spain, who has an international pedigree from his racing in Japan, but he’s never raced in IndyCar or on an oval before. And his first track is Texas. Oh my goodness [laughter], that’s like climbing Mount Everest. How is that going to work out?”

“So I think wherever you turn, wherever you look, there are stories everywhere. Will Power had a really frustrating opening start of the season last year and finished off with a bang. For me, that’s an ever-present question- what kind of Will Power are we going to see each year? He was so fired up as part of that iRacing series. So yeah, tons of stories, and that’s another plus that we will be bringing to this primetime broadcast.”