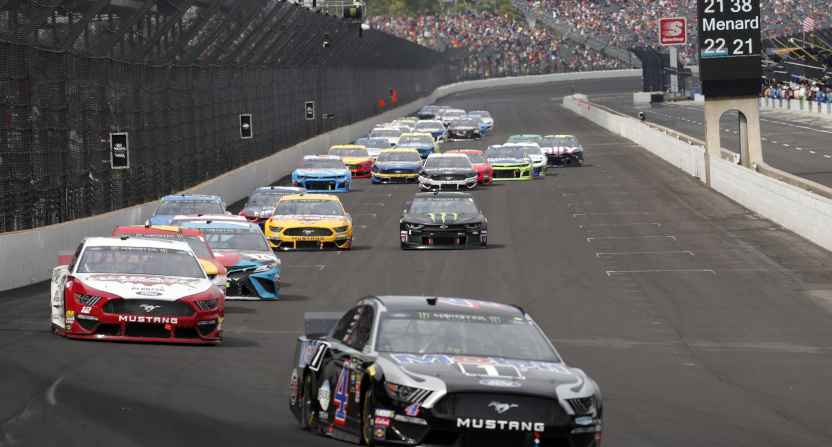 This weekend at Indianapolis Motor Speedway will see the first-ever doubleheader between IndyCar and NASCAR’s top Cup Series, but that’s going to come with some unusual broadcast moves. IndyCar and NASCAR’s Truck Series have held events at the same venue in the same weekend before, but this will mark the first overlap between IndyCar and the Cup Series (as well as the NASCAR Xfinity Series, which will also run at IMS this weekend). With NBC (which has the year-long IndyCar contract and the second-half NASCAR contract) broadcasting both the IndyCar and NASCAR events from IMS (NASCAR’s Big Machine Vodka 400 there last September is shown above), broadcasters from both series are going to show up on broadcasts of the other series this weekend. But as Adam Stern writes at Sports Business Journal, the changes go beyond that, and they include the NASCAR crew calling races from Charlotte, NC as part of precautions to limit how many people are at the track:

Jeff Behnke, NBC Sports’ vice president of NASCAR production and motorsports, said the stakeholders around the weekend have been holding weekly Zoom meetings with roughly 40 people to sort out the logistics. Some of those include the fact that NBC’s IndyCar talent and other related workers will be on site at IMS, while the network’s NASCAR talent and support team will be calling the action from hundreds of miles away at Charlotte Motor Speedway.

No fans will be on site for any of the races.

“We’ve been game-planning everything from the programming schedule to production schedule to track schedule and how these three different groups are all going to meld together,” Behnke said.

…“I cannot stress enough the quad of NBC, IndyCar, NASCAR and the track all coordinating and coming together,” Behnke said. “That’s what has made this a special time in planning and having these Zoom meetings with people who have never talked to each other before.”

The weekend schedule will include an IndyCar practice Friday, the IndyCar race Saturday at noon Eastern, the NASCAR Xfinity Pennzoil 150 race Saturday at 3 p.m. Eastern, and the NASCAR Cup Big Machine Hand Sanitizer 400 Sunday at 3:30 p.m. Eastern. The crossovers will go on throughout the weekend, and throughout NBC’s pre-race studio programming this week. Mike Tirico will be hosting both events for NBC from IMS, joined by NASCAR on NBC analyst Dale Jarrett (who has been recovering from COVID-19).

It’s interesting to see NBC have their NASCAR group call this race remotely. For a long time, remote broadcasts have been seen as lesser-quality, as they force announcers and analysts to work only from video, and there have been controversies about that in sports from women’s college basketball to men’s college basketball to other college sports to the FIFA World Cup. But in a COVID-19 era where everyone is looking to limit the numbers of people on site, more and more big-ticket events are going to at least partially-remote broadcasting, including MLB, the PGA Tour, and boxing.

And it makes some sense for NBC to do this, especially as they already have one broadcast crew working on site for the IndyCar events. Bringing in the NASCAR crew as well would mean a lot of people in one place, and there’s some risk to that. There are still undoubtedly going to be some challenges from a largely-remote production for the NASCAR races, though. We’ll see how this winds up affecting the broadcast.