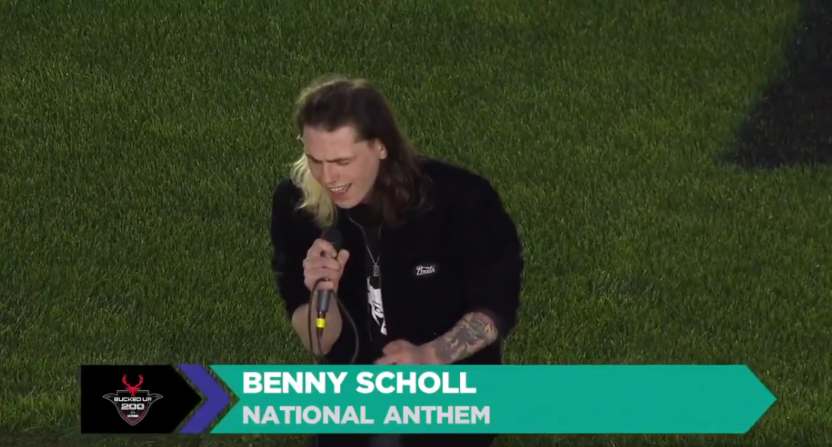 Sometimes, national anthems at sporting events go really wrong, whether it’s with the lyrics or with the tune. What happened during Friday’s NASCAR Camping World Truck Series Race At Las Vegas (a race previously in the news for series sponsor Camping World stepping in to sponsor a bunch of drivers) didn’t have the wrong lyrics or the wrong tune to “The Star-Spangled Banner,” but it did have quite a memorable scream-heavy performance from Benny Scholl of Avoid. Unfortunately, the anthem wasn’t broadcast on FS1, but video did spread around Twitter (the anthem starts around 0:56 of the below clip):

Here’s the anthem. If you don’t laugh then you officially have 0 fun in life. ?

That is certainly one way to sing the U.S. national anthem, and one with a whole lot of screaming emphasis. But amazingly, this isn’t even the first unusual approach to “The Star-Spangled Banner” at a NASCAR race. One particularly “unique rendition,” as it’s described on NASCAR’s official YouTube channel, came from Madison Rising at the Xfinity race at Daytona in 2014:

And in other races, there’s always Steven Tyler’s performance at the 2001 Indy 500, which featured…harmonica, for some reason?

As for Scholl and Avoid, here’s what their record company’s website says about them:

“Exploding out of Seattle, WA, hotly-tipped hard rock five-piece AVOID have been rapidly making a name for themselves thanks to their electrifying live show and an unabashed experimental approach to their music. The result is an alchemistic audio dose of heavy hedonism, the stamp of a young act unafraid to equally embrace both their innovation and individuality.”

Well, that was definitely an unabashed experimental approach to “The Star-Spangled Banner,” although it’s unclear if it came with an alchemistic audio dose of heavy hedonism. It did come with quite a few people making fun of it:

I’m going to have to avoid Benny Scholl. I believe that may have damaged my eardrums. ?

That was a pregnant pause, the person doing the anthem screamed louder than the guy giving the command, believe it or not.#BuckedUp200 #NASCAR #NCWTS

At the very least, this certainly got a lot more attention than your average anthem performance. And, hey, Scholl is still a lot less controversial than another recent anthem singer.