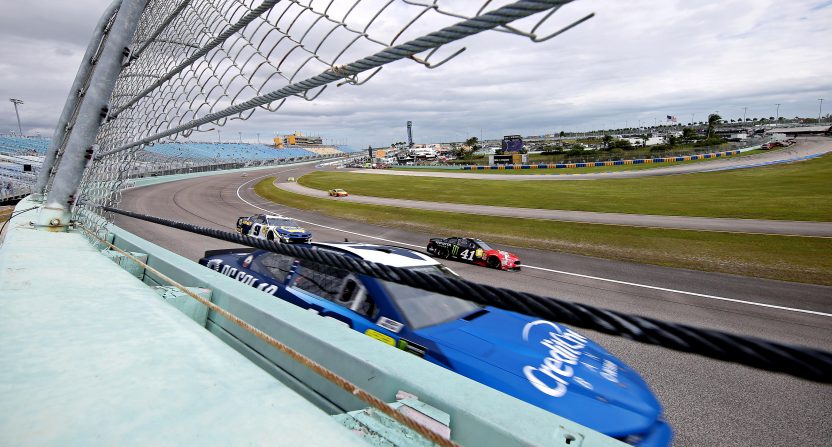 It’s no secret that NASCAR is at a crossroads. Fewer fans have been watching the sport and those who have remained are getting older. Changes have been made but most of them haven’t really resulted in a consistent uptick in ratings.

While most moves have taken place on the track, NASCAR has made moves off the track. Steve Phelps was named the new president of NASCAR near the end of last season and when CEO Brian France was arrested for DWI, Jim France stepped in and has been welcomed by many within the sport. Now, NASCAR is attempting something else off the track to drum up support by launching an ad campaign for nearly 20 TV markets throughout the United States. In addition, NASCAR has struck up a digital partnership with Barstool Sports, with Barstool president Dave Portnoy heading down to Florida this weekend for the Daytona 500.

According to Sports Business Daily’s Adam Stern, NASCAR is set to spend between $10 million and $20 million for this advertising campaign set to run throughout 2019. The main difference in this campaign compared to previous ones is that these ads will be shown during non-NASCAR related programming, done in an attempt to bring in current fans and make non-fans more aware of the sport and potentially lead them to be future fans.

After what was deemed a successful trial run last year, NASCAR is planning to launch local ads on local Fox and NBC affiliates in such NASCAR markets like Atlanta, Charlotte, Kansas City and Orlando (Daytona) and in cities like Cleveland, Milwaukee, Raleigh and Tampa where there isn’t NASCAR racing.

As far as what NASCAR is showcasing, they are looking at telling stories. In the Monster Energy NASCAR Cup Series, there are 40 teams and within those 40 teams there are dozens of stories on each team. Many of those stories are compelling, it’s just a matter of getting people to realize that.

Fox Sports this year dialed back its quirky “Daytona Day” marketing theme in favor of a more traditional campaign focused on the on-track action, and NASCAR appears to have a similar focus with a storytelling twist. NASCAR this week will debut a TV spot and digital creative around drivers talking in their race shops about getting ready for the Daytona 500.

“Everything we’re doing is storyline driven — the core of NASCAR is about the racing, drivers and rivalries, and that may take a different form or have a different emphasis, but the focus is on the core product,” Gregory said.

Whether or not this works remains to be seen. What’s clear is that a new ad campaign alone won’t do it, it’s an ingredient in a total recipe to bring in more fans. We know that NASCAR is betting big so they certainly seem confident this will help them turn things around.