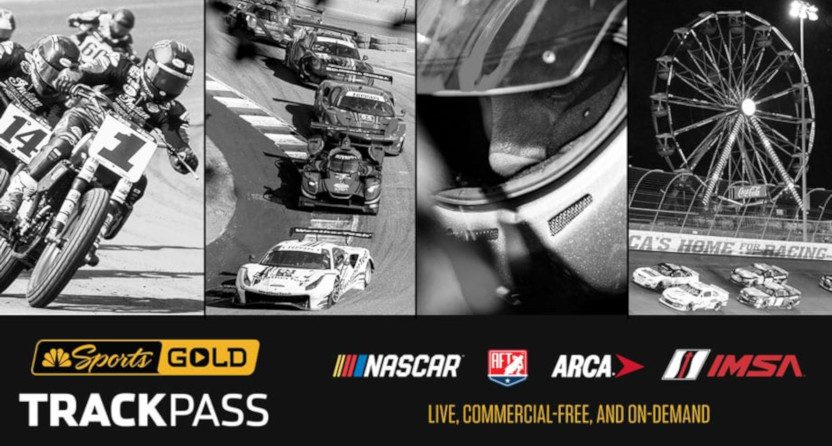 The latest example of a streaming company charging for an over-the-top service comes from NASCAR. NASCAR announced Thursday that they’ve partnered with NBC for a new NBC Sports Gold service called “TrackPass,” which will have “a variety of offerings covering American Flat Track, select ARCA Menards Series™ events (including ARCA Menards Series East and West races), NASCAR Whelen Modified Tour™, and tentpole grassroots racing events, as well as NASCAR Cup Series™ and NASCAR Xfinity Series™ practice and qualifying sessions” (for NBC’s half of the schedule only), plus “live and archived content from the IMSA WeatherTech SportsCar Championship™, IMSA Michelin Pilot Challenge and IMSA Prototype Challenge.”

The service will offer a full subscription for $4.99 a month or $49.99 a year, an IMSA/NASCAR Roots package for $2.99 a month, or a American Flat Track package for $1.99 a month. So there are lots of options out there, and existing users of the predecessor service FansChoice.tv will get a free introductory trial. But a lot of this content was previously available for free on FansChoice.tv, so some aren’t thrilled about having to pay for it now. However, NASCAR and NBC executives said Thursday that people should pay because of the improved quality here, as Matt Weaver writes at Short Track Scene:

FansChoice.TV offered much of the same content for free last year, but NASCAR president Steve Phelps emphasized on Thursday that NBC Sports Gold: TrackPass would mean an increased in production value and device accessibility.

“This is a tremendous partnership, and we’re thrilled to be announcing this today,” Phelps said. “It’s been a long time coming. Our folks have worked really hard with the NBC folks to really craft something that works. Between ARCA, IMSA, grassroots and Flat Track there is a great opportunity for us from a library standpoint, offering documentaries. Just a really cool opportunity for our fan base.”

…NBC Sports executive producer Sam Flood says he views his channel as the home for motorsports and his latest Gold Pass offering reflects that.

“We’ve gone deeply into this space across a number of platforms and this is just the natural next step,” Flood said during a press conference announcing the platform. “And most importantly, it’s a partnership with NASCAR that we’re going to work together to make this bigger and better and make more people aware of it. So, we’re going to get more people and more eyeballs consuming the sport, growing the sport.

Look, it’s understandable that networks are going to try to charge for whatever they can. And fans here who now have to pay for what they used to get for free are far from alone, as similar things have happened with the CFL, the Big 12, the AAC and much more. (And in some of those cases, this can actually be a win; the over-the-top nature of some of these new services means you can wind up actually paying less if you’ve already cut the cord from cable and then only subscribe to whatever specific over-the-top service you want. However, that’s not really the case with the NASCAR service, as much of this content was available for free regardless of if you had cable.) Not to mention, cord cutters will still need cable to watch races because Xfinity Series and Cup Series races aren’t included on TrackPass. Just because something is common doesn’t mean that it’s good. And whether the supposed production value improvements here will actually be worth the increased price is something worth keeping an eye on.