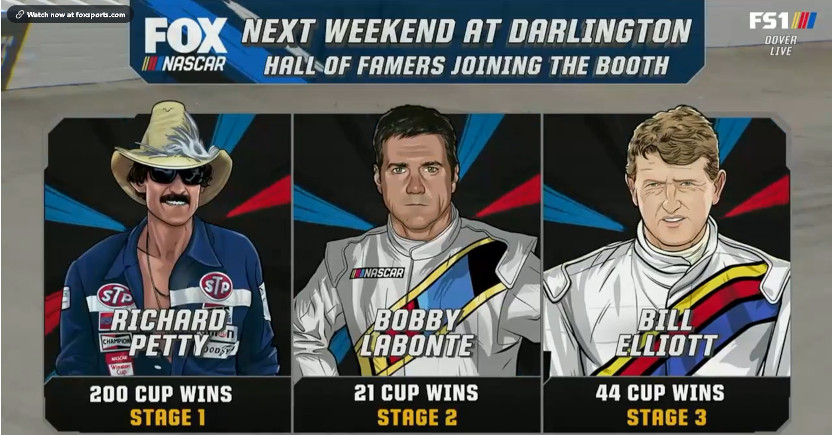 Joy said another positive surprise was working with Earnhardt at Talladega, and watching Earnhardt dive in for some play-by-play at certain moments.

“When you get Dale Jr., you get a really good, really keyed-in analyst, and you also get an announcer who likes to do play-by-play for a while. It was fun to have him going in and out of what are usually two separate roles; he would blend them together, and Clint and I would adapt to that, basically give him the reins and let him go. For us, that was different, and it was fun. It made it a different kind of telecast from what we’re used to doing, different, but enjoyable.”

As for this week, Landis said they’re taking a big swing by using three different guest analysts in three stages, but they’re hoping to build and maintain a rhythm through use of a preparatory  auxilary booth.

“This will be the most challenging so far. You’ve got three separate stages, you’ve got the all-time great, Richard Petty, in the first stage, you’ve got Hall of Famer Bobby Labonte in the second stage, and Bill Elliott in the third. The way we’re going to set it up is we have an auxiliary booth; while Bobby’s waiting and while Bill is waiting to join the broadcast, they will have an identical booth a couple of doors down, with headsets and monitors so they can listen and get the rhythm.”

“I look at it this way; you’ve seen kids play double-Dutch jump rope, and you stand there, you try and find your rhythm when you jump in. It’s hard when you do it cold, you’ve got to sit there and watch the ropes for a little bit. So we’re giving them the opportunity to find their rhythm before we ask them to come on over to the booth, put on their headset, and let it rip. There’s places where you need to look; you need to know where the program monitors are, the scoring monitors, how it’s set up, who’s talking in your headset, the cadence of the broadcast.”

“So that’s going to be a cool thing to do to get them set up there so they can find their rhythm when they come in during their stage; it’s going to be a lot smoother transition for them, and the tenure and the tone will already be laid out. Should they choose to go in a different direction, that’s great, that’s fine, but at least they’re not talking about something we touched on in the first stage or second stage. It’s going to be fun.”

Labonte said he thinks that auxiliary booth preparation will really pay off.

“That will be helpful, for sure. It’s like anything else; it’s new and it’s different, and it’s ‘What can we do to make sure we’re doing the right things?’ When we walk into [the broadcast], we don’t want to disrupt the flow and how they have things set up. So that will be great.”

And Joy said he thinks that will help keep the rhythm going.

“When they get into the booth, hopefully they can just drop right in and fit right in to the discussion and the commentary. I’m really looking forward to how all that plays out.”

Labonte said he’s hoping he’ll be able to bring some prediction and some insight from the driving he’s still doing.

“They said you need to bring a uniform, and I found one of my old uniforms. It was a crew uniform from the 80s, so it’s an 80s weekend. So in my mind, I bring a little bit of ‘Well, I was there on the pit crew, and then I actually won a race here. And I’m still doing a little bit of racing today and a little bit of TV.'”

He said he thinks his passion for the sport will come through as well.

“And I really love watching the racing. My wife can vouch that when I’m at home on the couch, I’m like ‘Ooh, I see something happening’ before everybody sees it, and she’s like ‘Man, how did you notice that?’ and I’m like ‘Well, I’m kind of used to it.’ So I think there’s something with me still being current, well, not as current as some, but still being current and being a fan of it and watching every race from one end to the other all the time, and not trying to get too tied up in minutiae of one thing, just giving a current and fresh perspective.”

Labonte said the Darlington track in particular will be an interesting challenge for drivers given its emphasis on running close to the wall, especially with the new car.

“You spend 95 percent of your laps four foot off the wall or less. California, yeah, and Las Vegas, you might run closer to the wall, but here, you don’t have a choice. You run up there or you’re just going to be slow. So to me, I think it’s going to be a challenge. It is every time people come here, especially with a new car, new stuff, less practice. It’s going to be quite the challenge for these guys to be set up. And once you get here, you’ve got what you got; you’d better have good simulation back at the shop, because if you don’t, you ain’t going to run good.”

“And the chances of getting in the wall are just going to be greater here than anywhere you go. And with this car, I think we’re going to put it to the test as far as how tough the right-side body is. We’ve seen it, but I don’t know if they’ll downshift in [turns] three and four. A lot of different things can happen here. Every place is unique, this one is just unique in that you run so close to the wall all the time, and the room for error is little. And what we’ve seen is that these cars are not easy to drive, so that’s going to make it more difficult.”

Landis said he thinks the three analysts for this week’s broadcast will particularly show off the wider guest analyst benefits of different perspectives.

“The thing I find cool about it, and it’s going to be accentuated this week, is if you were to take your four favorite authors, and they all had different styles, and you give them a storyline, you’re going to get variations of how that story’s told. And I think that’s the cool part about this entire season, not only just Sunday. These are some of my favorite and some of the fans’ favorite authors, so to speak, and they’re getting an opportunity to tell the story.”

“They’re all telling the same story, that’s the race, which is the centerpiece of all this, but it’s really cool to see how kind of each person authors their opportunity to talk about the race and the competition. And this week is going to be one I think that will be fascinating to listen to, I really do. I couldn’t be any more excited about it, and I think the viewers in the end are going to be the ones to win out, because they’re going to hear it straight from the horses’ mouths, so to speak.”

Landis said this guest analyst approach comes with a lot of extra preparation and challenges, but it’s worked out so far thanks to the effort everyone is putting in.

“I’m so appreciative of the work they’ve put in and how everybody’s come to play,” he said. “Everyone’s been so phenomenal to work with, and I think that’s just indicative of the NASCAR community. It’s really kind of open, passionate people. And after doing this for 20-some-odd years, this has been really a refreshing opportunity.”

Joy said this approach has been refreshing for him as well.

“The best part of this is that it’s fun and it keeps it fresh by having a different third person in the booth every week. …It’s just a lot of fun to see who they’re going to add to that pool and who’s going to join us the next time around.”

The Goodyear 400 at Darlington begins at 3:30 p.m. Eastern on FS1, with coverage beginning at 2 p.m. Eastern. Photos supplied by Fox Sports.