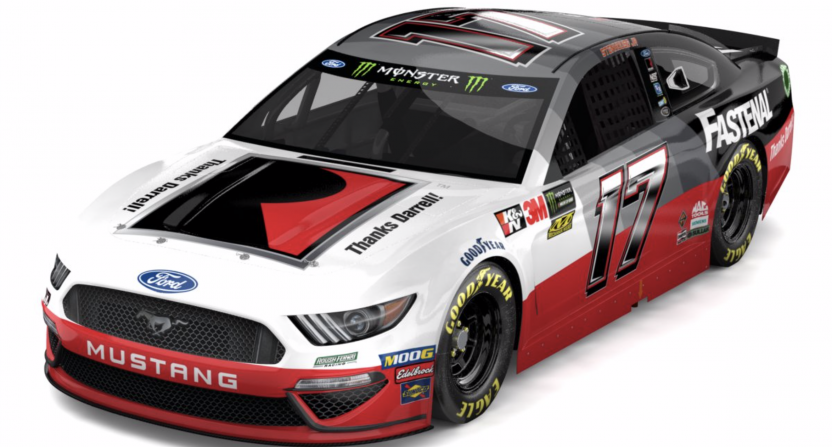 NASCAR Hall of Famer Darrell Waltrip will end his broadcasting career this weekend at the Toyota/Save Mart 350 in Sonoma. A part-time analyst when he raced in the 90s, Waltrip went full-time when he retired after the 2000 NASCAR season.

Fox brought in Waltrip when they began broadcasting NASCAR races in 2001 and in those 19 seasons, Waltrip has been a part of every NASCAR Cup Series NASCAR broadcast shown on Fox.

Since he announced his retirement in April, Waltrip’s colleagues and fans as well as drivers and tracks have wished the legend well and thanked him for his contribution to the sport as a driver, team owner, and a broadcaster.

Three drivers will have special paint schemes this weekend that will honor DW and highlight a moment from his driving career.

One of Waltrip’s most memorable car numbers was 17 and Roush Fenway Racing’s Ricky Stenhouse Jr. will be honoring DW with a paint scheme he had in the early 90s. When Waltrip left Hendrick Motorsports to start his own team, he had a similar paint scheme with Western Auto as a sponsor so this will have memories to the later portion of DW’s driving career.

ICYMI: @StenhouseJr will pay tribute to @AllWaltrip this weekend @RaceSonoma.

Highlighting the early portion of Waltrip’s career is Leavine Family Racing’s Matt DiBenedetto, who is driving the #95, Waltrip’s first number when he entered the Cup Series. Waltrip had the 95 until 1975 when he switched to 17, and eventually to the 88 with DiGard Racing, where his career really took off.

Check out this awesome @AllWaltrip throwback scheme we’re running @RaceSonoma on our No.95 @procoretech #Camry!

This scheme is based on DW’s 1974 Terminal Transport car.
DW made 35 career starts in the No.95 and we’re thrilled to pay homage to him this weekend!#ThanksDW #Team95 pic.twitter.com/4nxV9MFJSj

Having a special paint scheme takes a lot of logistical work. Sponsorship is huge and companies have a lot of say in how the car looks. So for Fastenal and Procore to forego their usual colors to help in honoring someone like Darrell Waltrip is a bigger deal than many realize.

David Ragan and Front Row Motorsports decided not to have a sponsor this weekend and instead gave DW the entire car. Modeled off his 25th anniversary “chrome car” from 1997, Ragan’s car has DW’s “Boogity, Boogity, Boogity” catchphrase on the hood and “#ThanksDW” on the side.

There will definitely be more tributes taking place Sunday, including one from Fox but there’s no doubt Darrell Waltrip has had a huge impact on many people within the NASCAR community. And as he retires from the booth, the people he impacted most are giving back to show how they feel.