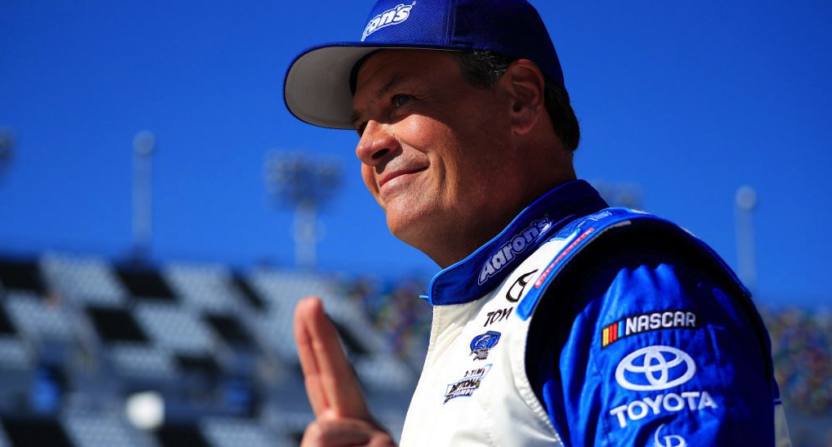 After 33 years, Michael Waltrip’s NASCAR racing career will come to an end this Sunday (Feb. 26) in the Daytona 500. Waltrip is the last remaining driver of an era who has raced against legends like Petty, Allison, Pearson, Baker and Yarborough.

While Michael Waltrip may not have had the career stats to be a NASCAR legend, he did prove to be one of the smartest and most loyal NASCAR drivers in history. Regardless of what kind of equipment he had, Waltrip seemed to have a knack for restrictor plate racing. With horsepower being restricted at Daytona and Talladega, all of the cars get bunched up, leaving it more to the driver to make the moves out on the track to win the race. Considering Waltrip’s four career wins came on restrictor plate tracks, that says a lot about Waltrip’s mentality and his racing mind.

Looking back through Waltrip’s career, you can also tell he’s very loyal to those who have worked with him. Whether it’s driving for Chuck Rider and Bahari Racing in his early days to his partnership with Toyota and his long-standing relationship with Aaron’s, who sponsors him this Sunday, Waltrip values relationships and is loyal to those who have given him an opportunity throughout his career.

Right before his 30th and final Daytona 500, Michael Waltrip spoke with The Comeback to look back on his career, discuss his final race, his TV work with Fox and his future. The Daytona 500 will air Sunday at 2 p.m. ET on Fox.

Michael Waltrip: Well, we didn’t qualify very well. Which is disappointing. But the draft has a way of working in your favor if you know how to use it. We’ve always done a pretty good job drafting and getting our way toward the front in the Daytona 500 and had success here. So I’m looking forward to leaning on that experience and trying to figure out how to work our way to get from the back to the front.

PB: For the Daytona 500, you have a special paint scheme on your Aaron’s Toyota with pictures commemorating your career. Do you have a personal favorite that’s on the car?

MW: I certainly do and I appreciate you asking. There’s a picture of me and my mom and dad on the side of the car that is from Nashville, Tennessee in 1984. It was a Dash Series race there and when I was a kid growing up, we would go from my hometown in Kentucky down to Nashville to watch my brother race every weekend. I just really wanted to win at that track where I grew up watching my brother. We were able to get a big win there in the Dash Series that night and Mom and Dad were in victory lane with me. It’s on the side of my car and that’s a pretty cool moment for me.

PB: Nice. Now early on in your NASCAR career, you went 16 years without winning a points paying race. You won the All-Star Race with the Wood Brothers. Was there ever a time in that timespan where you felt that first win was never going to happen?

MW: Well you know, that’s part of the interesting piece of that story is how determined I was to win one of these things. I won the All-Star Race, I won Xfinity races and have beaten the best on any given Sunday. I just didn’t beat them all [laughs]. So I knew I could do it and I knew I was confident that I would do it, but also was very cognizant of the fact that my chances were running out. Getting a competitive ride at the stage in my career after losing so many races seemed like it might not happen.

MW: Well, we were friends and he always told me I could win in his cars. If I drove for him, I’d win. And I said, “Well, let me drive for you then.” [laughs] And he certainly was confident that we could get the job done. It was just a really fun time leading up to the 2001 season talking with Dale and working with Dale and understanding what he expected from me and how we were going to go about racing the races and it was a special time.

PB: Now, after your career with DEI, you became a car owner yourself. Became a driver/owner and then you partnered with Toyota. Taking everything into consideration, was there anything you’ve learned from your career, whether from driving or as an owner, that you’ve been able to take with you in your everyday life?

MW: Yeah, just perseverance. Nothing ever comes easy and in my life, it certainly hasn’t. I’ve had to work hard for everything I’ve gotten, so I just would never give up. I try to instill that in my girls and just to keep your head down and keep working and try to be positive and energetic and make all the moves that you think it takes to be successful. Mainly, be persistent and don’t give up. That’s how I’ve lived my life and that’s worked well for me and that’s what I tell my girls I like to see them do.

PB: When you went from full-time to part-time, what kind of a transition was that as a driver, knowing that you were only going to be doing the restrictor plate races?

MW: It’s important to understand what you’re up against. By watching that Clash on Sunday, I realized I’m up against some serious, fun competition and some fun moves that you’re going to see on the racetrack. So I’m really happy about the cars and the way they’re running now and the way they’re performing on the restrictor plate tracks. The way that NASCAR has the rules sorted out, I think it’s going to make for some great racing and a great Daytona 500 this Sunday on Fox.

PB: And speaking of Fox, you are entering your 14th year with Fox as a color commentator for the Camping World Truck Series and your sixth as an analyst in the Monster Energy NASCAR Cup Series. What has been your favorite part of the job?

MW: Just understanding, you know, I know these guys. I’m friends with some of them. I know how they operate and then just sitting back and watching their talent. Appreciating what they’re able to do on the racetrack and being able to maybe give some folks watching at home some insight as to what might be going on in their heads and how they’re thinking and why they’re making the moves they’re making. I just really enjoy that part of it, knowing the competitors and watching them go do their thing.

PB: It also seems very natural. Your brother Darrell is there [on Fox]. It seems like you’re all friends. The drivers are close-knit with you guys [in the media]. As a driver, going to be a former driver, it just seems like a very natural feeling amongst everyone in there that you can work off each other in a way.

MW: Well that’s important, you’ve got to have a mutual respect. I think that’s what’s fun about me being a part-time driver is I run some races, and so I got an idea of what it’s like out there and how tough it is and what it’s like to drive one of these cars these days. So I think that adds to our broadcast and of course, having Jeff Gordon just out of the race car and my brother who’s won three championships. It’s just an all-star lineup and I really appreciate being a part of it.

PB: Apart from TV, what does the future hold for you?

MW: Oh, I’m going to play some golf. Talk about cars. Watch my daughter grow up. She’s a freshman at the University of Michigan, so just be a dad and got a couple grandkids. There’s a lot going on around here.

PB: Nice, and final question. As you’re entering your final race, is there anything that you would have done differently in your career?

MW: Well, my daddy always used to say, “You can’t change what you had for breakfast, son.” [laughs] So I don’t really look back and think about what I could’ve done differently. I just look back and appreciate the opportunities and the fact that I got to do what I love to do for so long. And all those thoughts will come to culmination Sunday afternoon when we roll off for the Daytona 500. And I’m looking forward to that.

[Full disclosure: NASCAR is hosting me in Florida to cover the Daytona 500 for The Comeback this weekend.]