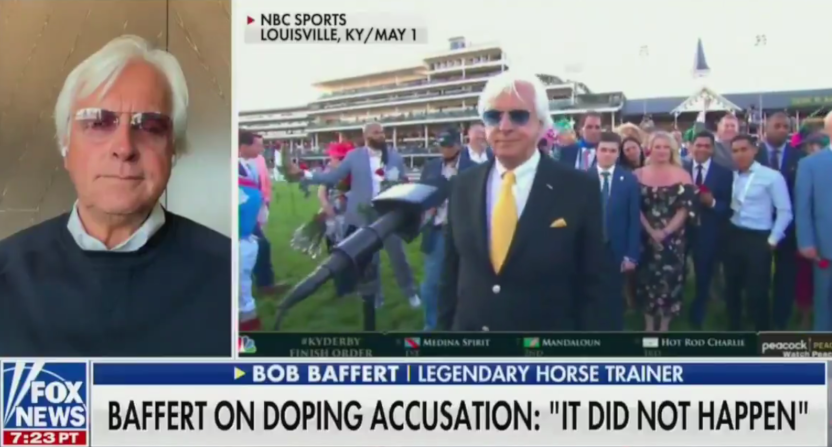 The last few days have seen quite the horse-racing story developing around Kentucky Derby winner Medina Spirit. The horse failed a post-race drug test after its win Saturday, which could lead to a disqualification barring the results of a second test, but that disqualification hasn’t formally happened yet. Meanwhile, trainer Bob Baffert (who has previously had quite a history of horses failing drug tests) went on Fox News Monday to call this potential disqualification “cancel culture” (as seen above), and also spread a story that the positive test here for betamethasone (at 21 picograms, more than twice the amount considered allowable) possibly came from a groom urinating in the horse’s stall after taking cough syrup:

"We live in a different world now. This America's different." pic.twitter.com/bsQeiV7oXi

Baffert says one test issue was created by a groom urinating in the stall after the groom had been taking cough medicine. Horse ate some of the hay.

Monday also saw Baffert insisting that Medina Spirit had never been treated with betamethasone, calling this “a complete injustice,” and vowing to send the horse on to compete in this week’s Preakness Stakes:

Baffert said “he does not feel safe to train,” and doesn’t know how to move forward knowing something like this can happen (said he’s never given Medina Spirit this drug). Said it’s a complete injustice and he will fight it tooth and nail. Sending Medina Spirit to Preakness.

On Tuesday, though, Baffert had quite a change of tune, releasing a statement that indicated that yes, Medina Spirit was indeed treated with a rub containing betamethasone:

Statement released this AM by Bob Baffert’s lawyer Craig Robertson states Medina Spirit was treated with an anti-fungal cream that contained betamethasone. pic.twitter.com/azxjxAzpKa

Interestingly enough, after all this, Medina Spirit is still going to be allowed to compete in the Preakness Stakes Saturday.

Medina Spirit will be permitted to enter into the Preakness — with rigorous conditions to entry along with a binding commitment from Bob Baffert to full transparency of medical and testing results that will allow for all results to be released to the public.

So, the horse isn’t cancelled after all. That seems like a very good thing for race broadcaster NBC (their coverage will air from 12:30 p.m. to 2:30 p.m. on NBCSN, and from 2:30 p.m. to 7:30 p.m. on the NBC broadcast network). There’s always intrigue when the Kentucky Derby winner still has a shot at a Triple Crown. And while the Triple Crown bid’s status is somewhat up in the air here (the Derby disqualification may happen before then, but Baffert has also suggested he may appeal, so the eventual result could take a while to get to), Medina Spirit certainly has drawn a lot of attention this week.

This will create some challenges for the NBC broadcast, though. They’ll now have to balance talk about the Medina Spirit controversy with a regular race preview and coverage of the rest of the field. We’ll see how they do with that.