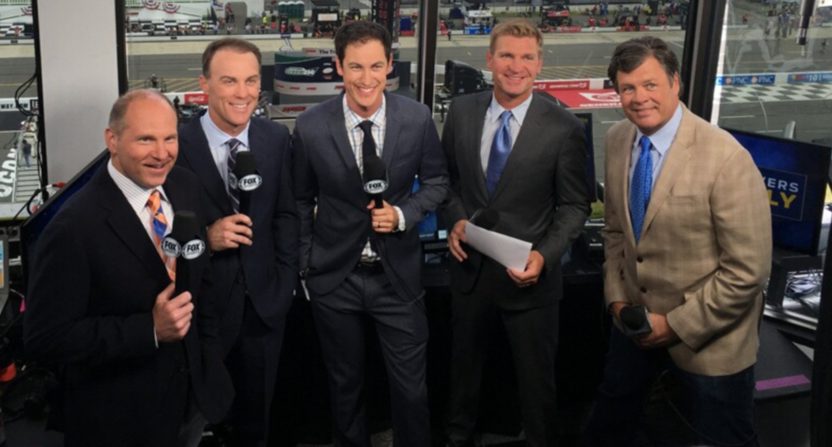 Just like last year, Kevin Harvick is taking on play-by-play duties along with Clint Bowyer and Joey Logano in the booth with him as analysts. Ryan Blaney and Erik Jones reprise their pit reporter roles from last year and have added Darrell “Bubba” Wallace Jr. in the pits. Ricky Stenhouse Jr. moves from pit road to the Hollywood Hotel as an analyst while Brad Keselowski is on as the host inside.

It’s great to see Fox keep the bulk of the group from last year because they had a great broadcast. Newcomers Keselowski and Wallace are no doubt entertaining and should carry their own while Stenhouse moving to the Hollywood Hotel makes sense given he won the Cup race at Talladega last year.

Bubba Wallace didn’t really need much convincing to be a part of this broadcast. “I was like, ‘Yeah, let’s do it,'” Wallace told Awful Announcing. “We didn’t have a lot of time to commit to it, but I didn’t need it. I thought it was something cool Fox did last year, and now being in Cup, I have a chance to do it. So, it’s just cool to come on board.”

The only time you will see the regular Fox broadcasters on TV will be during their pre-race show. Because Cup practice will end right before the Xfinity race begins, Shannon Spake, Larry McReynolds and Michael Waltrip will be on for the first half hour while the drivers change clothes and get in their positions for the race.

Play-by-play man Kevin Harvick is going to be leading the broadcast, just like he did last year at Pocono. Harvick talked to Awful Announcing about his broadcasting role with Fox. Occasionally, Harvick is an analyst at some of the Xfinity and Camping World Truck Series races but while going from analyst to play-by-play seems like a subtle change, it’s anything but.

“Last year, I was scared to death to tell you the truth,” Harvick said. “Because never really being in that position before, I was as nervous going into that booth last year as I’ve ever been doing anything in my whole life. Because you’re stepping outside of your comfort zone and outside of your body doing something that you’ve never done before.”

Harvick’s style can be described as very natural. Something I noticed last year was that these drivers were so comfortable with each other that it was very much like they were sitting around at the bar and talking about the race.

“Being able to just casually talk about racing and not even realize that you’re delivering it to a couple million people is something that for me, is a lot of fun.”

But while Harvick is commentating, he is able to pick up a thing or two that is revealed during the broadcast that he is able to apply while on the track.

“Last week [as an analyst], I was listening to the broadcast and they told one of the Xfinity drivers to shut his car off while it was at full throttle and [told] the reason why, right over the radio,” Harvick said. “And I was like ‘I’ve never heard that. I’ve been doing this for 20 some years and I’ve never heard that.”

And when asked about whether or not this would be in Harvick’s post-racing future, he was all for that.

“That would definitely be the next phase of my career that I would love to do,” Harvick said. “That’s really the reason we’ve done so many of these Xfinity and Truck races with Fox and they’ve been great to let us do the things that we’ve done. I look at it as I’m getting to learn about what I want to do when I’m done while I’m actually still working.”

“It’s also the reason that we branched off into the Sirius radio show [Happy Hours from 7-9 PM ET] because I feel like, as you do that full time, you’re going to need to be better at interviewing people and it was not something that, I felt like I was very good at. I feel like the radio stuff really helps you learn how to do the interview portion of this job. So it’s definitely, I feel like we have a plan of all the things that we’re trying to accomplish when I decide to quit driving but I feel like by the time you get to that point, you need to be honed in on how it all works.”

Fox’s pre-race show at Talladega starts Saturday at 2:30 PM ET while the race, as well as the Drivers Only portion of the telecast, will start at 3:00 PM ET on broadcast Fox.