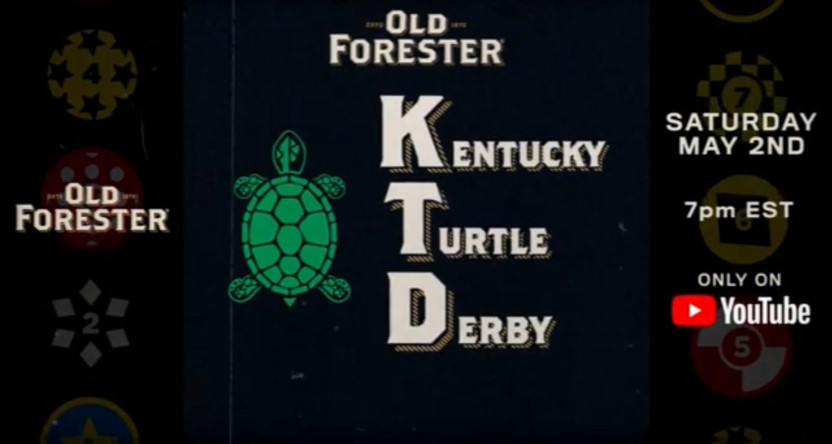 There may be no Kentucky Derby this first Saturday in May, but Old Forester Bourbon is sponsoring an interesting alternative; a turtle derby. The only other time in the 146-year history of the Kentucky Derby where the usual horse race wasn’t run in May was in 1945, when the federal government implemented a ban on horse racing thanks to World War II restrictions; that led to a turtle derby in May, and the regular horse race in June. With this year’s race postponed until September thanks to COVID-19, Old Forester is sponsoring another replacement turtle derby, and they’ve brought in long-time Derby race caller Larry Colmus and bugler Steve Buttleman to help. Here’s what Colmus told Louisville’s WDRB about this:

“I don’t think I’ve called a race that’s eight minutes long,” Collmus said. “I’m going to have to drink plenty of water to prepare for that one. With the Kentucky Derby, there’s months of preparation getting to know all the horses, getting the names in your head. These turtles, they’re going to be a little bit new to me.”

…The turtle race will actually be pre-taped in Chicago with the likes of Sir-Hides-A-Bunch, American Toruga and Galapa-GO! in the field. There was no immediate word if Leonardo, Michelangelo, Donatello or Raphael would be eligible to compete.

“It is weird, but there’s been a lot of weird going on the last couple of months in this country,” Collmus said. “It will be like the Derby broadcast. Just turtles instead.”