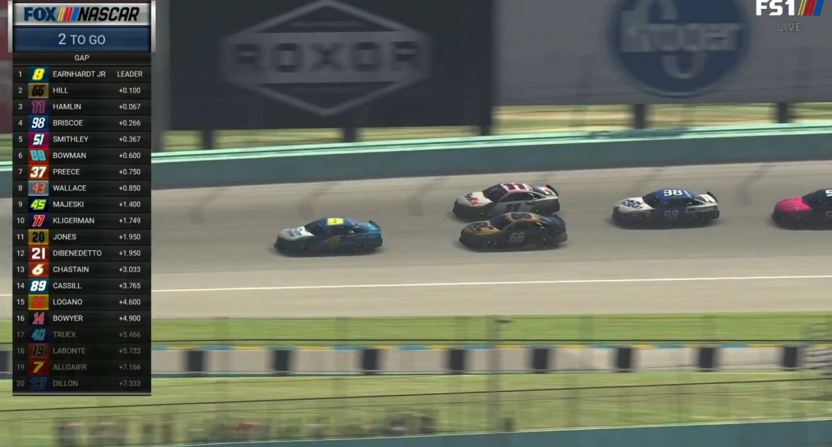 We learned earlier this week that FS1 would be broadcasting a virtual NASCAR race today featuring real drivers on the iRacing sim platform. Considering we’re currently living in a world almost entirely without sports (with even esports events being called off due to COVID-19), it seemed at the very least like a potentially welcome distraction.

It ended up being even more than that. FS1’s broadcast (featuring normal NASCAR commentators Mike Joy and Jeff Gordon, along with “pit reporter” Larry McReynolds and “in-car” correspondent Clint Bowyer) walked a very fine line from the jump, joking around with some of the usual race broadcast staples while also delivering a lot of relevant and interesting information about the game and how it both mimicked and differed from real racing.

Here’s the opening, for example, which is a good example of the tone:

There was also a national anthem, because of course there was:

FS1 is doing an eNASCAR event and they have a guy singing the national anthem from his garage while the NPC fans in the crowd stand at attention. pic.twitter.com/vzPJnqXUIl

iRacing is a platform used by everyone from game enthusiasts to real professional drivers looking to get extra practice in on various tracks or just to play around. The virtual element meant that sim-racing veteran Dale Earnhardt Jr. could join as well; now an analyst at NBC, Dale Jr. was retired from real racing after multiple severe concussions.

The game looked fairly good on television, and close enough to the real thing to not be distracting at all; the track is obviously rendered to exacting detail, and the action flowed fairly well, aside from a spate of early cautions that broke up the race.

One of those collected in-race analyst Clint Bowyer, a fun presence on the broadcast all afternoon.

The spots in which the video game seams were visible ended up being more charming than anything; here’s a pit stop featuring the cars being “worked on” despite the game having no rendered pit crew members. Listening to Gordon give legitimate analysis about a bumper “fixing itself” while tire changes occur via unseen hands is another great example of the broadcast walking the line between having fun and not treating the race as a joke.

Later on, Bowyer was the source of a caution:

At one point after a yellow-flag stop, Earnhardt came off pit road as the leader:

Gordon joking about the virtual crowd going crazy for Junior is great. As was Mike Joy feinting towards a serious ad-read for a typically sponsored segment:

And, best of all for viewers, the race was good! With one lap to go, Earnhardt was in front, trying to hold off a charge from Denny Hamlin, who many had pegged as a possible favorite heading into the race.

What a race. What a finish. This broadcast was exactly what I had in mind, and it delivered. pic.twitter.com/iuZp3pNHEw

It was interesting to hear Earnhardt afterwards talk about how he didn’t want to wreck anyone, even though had he been more aggressive in his blocking he may have been able to hold on for a win. Considering the lack of real damage, danger, or expenses for repairs, that’s some incredible sportsmanship.

It was just a pleasant way to spend 90 minutes right now, all things considered. Joy and Gordon seamlessly calling a virtual race was very impressive; Gordon particularly did an incredible job with information; viewers likely came away knowing a lot more about both real driving and sim driving. It can’t have been an easy thing to do, either.

Reviews were fairly positive, and it occupied two of the top three Twitter trends in the United States for much of the afternoon.

This was actually really cool to watch and yes I’ll take pretty much anything right now https://t.co/BLBaOni9C6

It was surprisingly cool!

This is the most my non-NASCAR timeline has ever mentioned NASCAR, so I guess it worked? ??‍♂️ gotta have Jr in it every week for sure.

The point about Earnhardt being a legitimate draw is probably a good one; he’s said he plans on doing more races, though probably not all of them, but even in virtual form he still has the ability to bring in more casual viewers. NASCAR hopes to do this every week until real racing returns, and considering how well today’s FS1 broadcast went (and how desperate the networks are for inventory), it’s possible that Fox decides to bump at least one of them up to the main network.

This was about as close as we’re going to get to real sports for a while, and it was presented in just about the best way possible. Kudos to all involved.