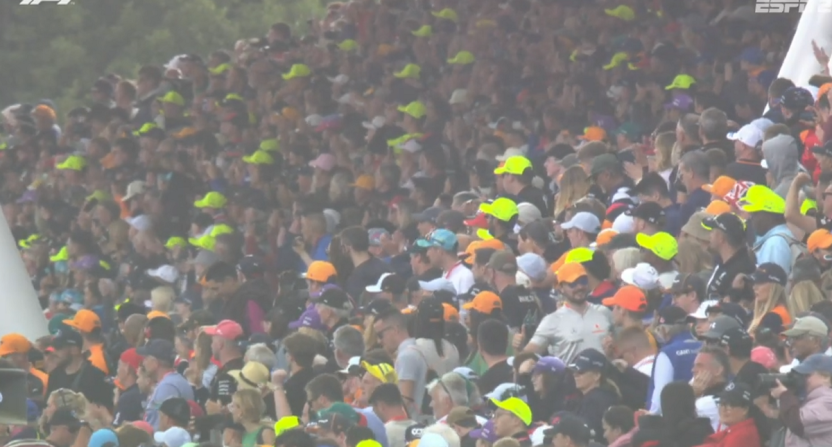 Formula 1 is indisputably seeing an upswing in popularity in the United States, and the presentation is a key factor as to why.

ESPN uses the Sky Sports coverage feed, and in general, Formula 1’s production values are impossibly high. The action is constant, there aren’t commercial breaks, the graphics are slick and solid, and the camera options and angles are typically everything you could want.

This sequence was absolutely electric on Sunday, for example, with commentator David Croft fully in his element. (Croft isn’t perfect, but man, does he convey energy at the right times.)

The elite commentary, the camera shots, the crowd roaring, the drivers battling for their lives on the grid. GOOSEBUMPS. Formula 1 – The Greatest Sport Of All Time ?❤️ pic.twitter.com/EWePuKsilT

That said, there is one bit of the standard presentation that needs to disappear immediately: the ridiculous overdependence on crowd shots. This is already an overused trope for sports television production around the world, and American networks do the same thing with regularity. And while there’s occasional value to be had (surrender cobras are absolutely part of the value equation, for example), by and large they’re almost never more interesting than keeping the action on drivers, athletes, coaches, or other people actually involved with the sport.

Take a look at the image on this page, for example. You might think that’s what the race production chose to cut to as an opening establishing shot, or maybe as an interstitial during the lengthy red flag delay at the beginning of the race. You’d be wrong.

That bland, distant shot of a sea of people looking perpendicular to the camera came right after race winner Carlos Sainz climbed out of his car on pit lane to celebrate his first win in Formula 1.

This followed up Saturday’s qualifying broadcast, which saw Sainz take provisional pole with several other contenders still behind him on a quickening track. For some reason, the broadcast stayed on Sainz’s in-car camera, cutting back and forth to similarly vague crowd shots as his competitors finished up their hot laps completely unseen.

There’s another element that’s particularly frustrating to me as a relative F1 neophyte. I took one of the more popular American paths to F1 interest in 2020 by getting really into Netflix’s Drive to Survive docuseries. One thing that means is that I’m drawn to how drivers interact with each other. Seeing how, say, Sergio Perez or Lewis Hamilton congratulated Sainz is immensely more interesting to me than seeing a sea of head sides at great remove.

Formula 1 has leaned into that a bit this year, even, bringing back the cool-down room camera and audio for podium finishers after the race.

f1 bringing back the cool-down room just made my day #IMOLAGP pic.twitter.com/bIarB1byLq

That is endlessly fascinating to me; they honestly can’t show enough of it, and whenever commentary talks over the mic pickups of drivers rehashing the race or even just idly chatting I react the same way I do when golf commentators talk over player-caddie conversations. Nothing they could add would be of more value to the viewer.

Going forward, more of this, please, and less of the crowd reacting like they always react: delayed waving and forced celebrating. Please just show the cars going very fast, or the beautiful drivers either being sweetly happy with each other or passive-aggressively annoyed. It’s not that hard. No one watching is tuning in to see fans in the stands.

If I wanted to watch a fan watch an F1 race, I’d just prop a mirror up behind the television.