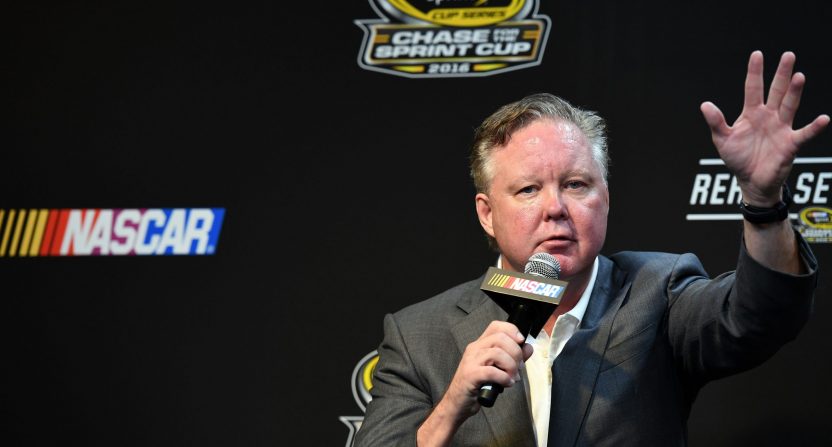 Before Brian France took legal action against the proprietor of the Drunk Brian France Twitter parody account, the wider sports public probably wasn’t that aware of France. The account itself still has under 20,000 followers, even after the slight publicity wave of the lawsuit itself.

A lot of people were curious about the outcome; parody is generally protected speech, but obviously any very wealthy individual can put a lot of pressure on just about anyone simply by filing any kind of claim. (There was at least one crowdfunding effort to raise money for the legal defense.) Today, the account tweeted this notice, which included an apology to France:

The attention to the case, though, has put France’s past back into the spotlight. Michelle Martinelli at For The Win talked about it in this deep dive on the initial filing:

France’s tenure came to an abrupt end after he was arrested in August of 2018 for driving while intoxicated in Sag Harbor, New York. After he was pulled over for not stopping at a stop sign, police said they determined he was driving “in an intoxicated condition” with a blood alcohol level of 0.18, more than twice the legal limit in New York. His eyes were glassy and his speech slurred, USA TODAY Sports reported according to police.

He was also found in possession of five oxycodone pills and faced charges of aggravated driving while intoxicated and criminal possession of a controlled substance. He pleaded guilty in June of 2019 to DWI in exchange for a reduced sentence, which includes having the misdemeanor reduced to a non-criminal infraction if he completes the terms of the deal.

A day after his arrest, France took an indefinite leave of absence from his NASCAR post, and it eventually became permanent. His uncle, Jim France, replaced him and is the current CEO.

It’s wild that an insanely wealthy person would get so fed up with a Twitter account that he’d go through all of this trouble and make himself look worse for new reasons while dragging the old reasons back into the spotlight, but the wealthy behave in weird ways. Put another way:

I find it hard to believe this parody account has done more harm to Brian France or the France family than Brian France.

So, well done, Brian France. This is a win, and it’s certainly not in any way a very stupid self-own.