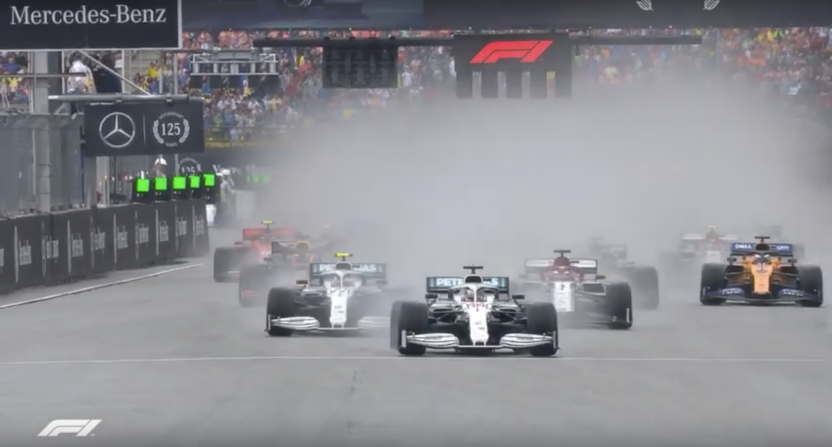 This past weekend’s German Grand Prix was one of the best Formula 1 races in years. With rain being the great equalizer, it caused drivers to take on added risk and some fared better than others.

It would have been a shame if people couldn’t see this classic race, but a Saturday morning fire almost made the rest of the F1 weekend audio only. However, some quick thinking by Formula 1 and their on-site broadcasters saved the broadcast.

According to Motorsport, a storm caused a fire to start near the F1 broadcasting truck responsible for providing the world feed to European broadcasters. The truck was destroyed, but the show had to go on, and Formula 1 and broadcasters on-site teamed up to make sure viewers around Europe got to see FP3 and the rest of the weekend’s activities.

Because the race was in Germany, local broadcaster RTL stepped in to help by bringing two satellite trucks direct to Hockenheim, but neither were going to be there for the next practice session.

To simplify what was explained to Motorsport, the only feeds that were in operation were the UK Media & Technology Centre for social media and web content, as well as transmissions to feeds in Asia and the Americas. It was decided to use the Asian feed and then transmit the feed off-site from Tata Communications’ backup system in the UK, with Sky Sports on standby in case something happened.

This was a situation where it paid to have many broadcasting partners around the world because everyone who was at the track stepped up and worked together to find a solution. Fans in Europe didn’t notice any issue and got to see FP3, qualifying, and the race like everyone else around the world.

Because it’s going to take a while to fix the truck, F1 will implement a similar setup this weekend as the series goes to Hungary. After Hungary, F1 is on a four week break, so things may be back to normal in Belgium. But unlike in Germany, they at least get to plan this out.