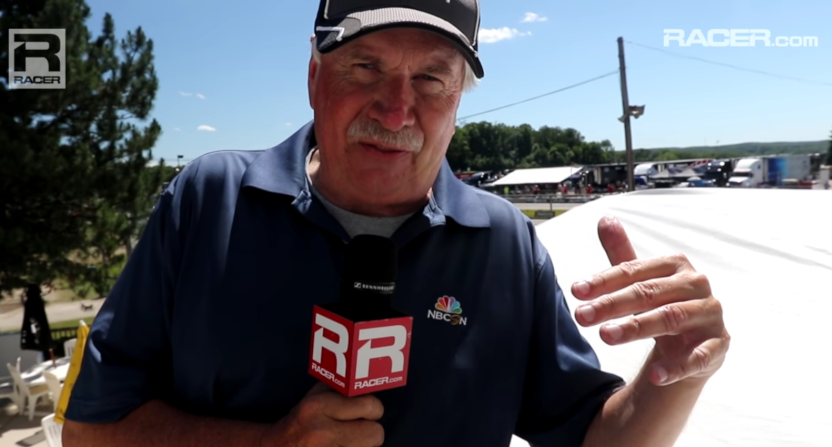 The racing world has lost several notable figures lately, including racer and commentator Bobby Unser and “Voice of the 500” Bob Jenkins. The latest is Robin Miller, a long-time Indianapolis Star columnist who then went on to TV work with ESPN, Speed, and NBCSN and continued writing with Racer magazine. Miller had been battling cancer and leukemia for some time, and he passed away this week. His sister Diane Miller Zachary announced that news on Facebook Wednesday:

Miller is most known for his motorsports journalism, but he had a remarkable life overall, including time covering the Indiana Pacers while they were still in the ABA and a decade of driving race cars himself. Here’s more on him in a detailed obituary from Curt Cavin at IndyCar.com:

Miller’s journalism career began at The Star in 1968, and he never retired from writing about auto racing. His stories and columns were featured in Autoweek, Car and Driver, Sports Illustrated and RACER, among other notable publications and websites, and for years he hosted shows on Indianapolis radio stations as he was a master storyteller.

…Miller, a Ball State dropout, got his first break as a newspaper writer when The Star needed a reporter for the still-fledgling professional basketball team, the Indiana Pacers of the American Basketball Association. Fiery coach Bobby Leonard took a liking to Miller, allowing the skinny-but-frisky 19-year-old access to the team that would be unheard of for today’s sportswriters. Many of the ABA players from that era – Bob Netolicky, Mel Daniels, Roger Brown and Billy Shepherd – became among Miller’s closest friends.

…A decade in a race car gave Miller a unique perspective on the sport and the drivers he covered. Over a span of 50 years, Miller befriended most of racing’s biggest names, regularly engaging them at lunches and dinners he organized. He was particularly close with “500” drivers Tom Sneva, Parnelli Jones, A.J. Foyt, Dan Gurney, Bobby and Al Unser, Tony Bettenhausen, Mario Andretti, Johnny Rutherford, Dario Franchitti and Tony Kanaan, and late-night TV icon and INDYCAR SERIES team owner David Letterman. Yet he seemed to know something about everyone involved in the sport, and he could hold court with the best of them.

…In 2019, as Miller covered his 50th “500” amid declining health, Indianapolis Motor Speedway announced the creation of the Robin Miller Award, to be given annually to an unheralded individual who has brought unbridled passion and an unrelenting work ethic to enrich the sport.

Here’s some of what Miller wrote in a letter to Racer readers on July 31:

Facing your mortality isn’t something to think about every day or dwell on, because you’re alive and death isn’t in your daily mindset.

But when cancer and leukemia decide to gang up on you then everything changes, and you are suddenly lining up in a heat race with The Grim Reaper. Might be a 50-lapper, could be an enduro or you might get lucky and run for a year or two.

My situation is pretty cut and dried. There is no cure for my illness but it can be treated, and I’ve spent lots of hours at the clinic in Greenwood, Indiana with an awesome staff of doctors and nurses.

The outpouring of good wishes, prayers, positive thoughts and support from RACER nation is beyond humbling. I never dreamed that a guy who writes stories about race drivers could impact people’s lives and instill so much passion. I’ve had the greatest life anyone can imagine, and I’ve been lucky enough to share it with the fans.

Twitter lit up Wednesday with tributes for Miller from throughout the motorsports world:

Thinking of Indy without Robin Miller is like trying to imagine the sky without clouds. I can't do it. He was my friend, my mentor and my hero. I'm keeping the last hilarious voice mail he left for me until the day I leave here to see him again. pic.twitter.com/sHUBMlVx7H

Sad to hear that Robin Miller has died. The fans benefitted from his incredible insight on the sport and its participants. RIP. https://t.co/Tz575gAyO5

If you haven't ever done so, track down a Robin Miller column to read the wittiest and sharpest takes the motorsports world will ever know. So sad to see him go, but so damn glad we knew him. https://t.co/1SPisnUpDi

R.I.P. to one of Indy’s all-time great characters, and the best racing journalist ever.

Mario Andretti said it best: “There’s only one Robin Miller, and we can all thank God for that.” https://t.co/nxByq1oW7s

There are no words to describe the loss of Robin Miller to racing, Indianapolis and the world. He was always kind and warm to me, even when asking the hardest questions to do his job. I will forever cherish his compliments to me. Godspeed Robin. https://t.co/on5W25pzyQ

.@IndyCar CEO Mark Miles on the passing of motorsport legend Robin Miller: 'There simply won’t be another Robin Miller, and he will always hold a place in our hearts.' pic.twitter.com/7WdyvJ2IJb

Friend or foe, you always knew where you stood with Robin Miller.

And every open-wheel racing fan knew there were few who were more knowledgeable or passionate about our sport.

He will be deeply missed, and our thoughts are with his family and friends. https://t.co/Ga4trMJTvx

We love you, and we'll miss you.

Robin Miller has died at the age of 71. pic.twitter.com/O8nG7UeYqj

Robin Miller was a passionate scholar and highly respected ambassador of our sport. His unique presence will be missed in media centers, paddocks and on pit lanes around the country.

Our thoughts and sympathies are with his family, friends and colleagues.? pic.twitter.com/DwJQwLUtKY

Our thoughts go out to Miller’s family and friends.

[IndyCar.com; screengrab from one of Miller’s videos for Racer]