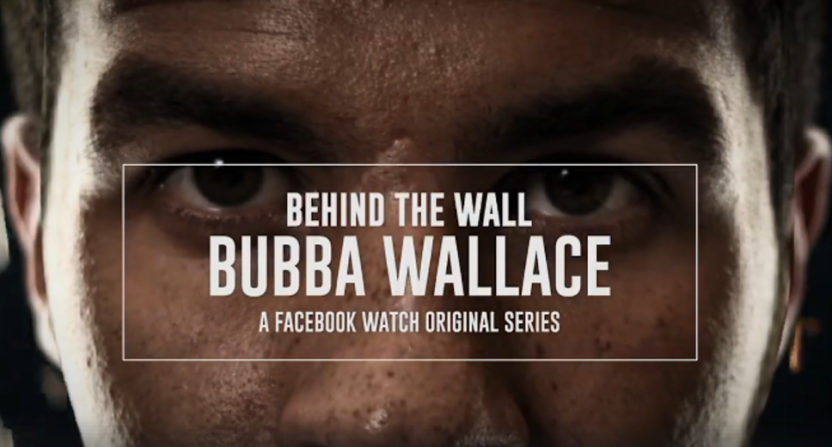 The Facebook Watch push into sports shows centered around big names is continuing, and their latest entry is from the world of NASCAR. Following such efforts as Tom vs. Time, No Script with Marshawn Lynch, and Ball in the Family, the newest sports-focused entry is an eight-episode docuseries on NASCAR driver Darrell “Bubba” Wallace Jr., titled Behind the Wall: Bubba Wallace. The series, from NASCAR Productions and NASCAR Digital Media, focuses on Wallace’s background and rise in the sport, to the point where he’ll become the first African-American driver since 1969 to compete in the Daytona 500 this Sunday.

Todd Spangler of Variety has the schedule of planned episodes and commentary on Facebook buying this from NASCAR:

Ahead of the race, the first episode in the original series, “Behind the Wall: Bubba Wallace,” will post on Thursday, Feb. 15 on the Facebook Watch show page for the series (at facebook.com/behindthewallbubbawallace). Two episodes will air per day from Thursday through Saturday, while the series’ final two episodes will be available after the Daytona 500 next week.

Facebook is paying NASCAR for rights to distribute the series. It’s part of the social giant’s initiative with Watch to pull more premium content into the platform — to get Facebook’s 2 billion-plus users to spend more time watching TV-like episodic programming, so it can serve higher-value ads.

As per NASCAR’s release, this will have lots of content from ahead of this season, and Wallace will interact with fans live on Facebook “as the series unfolds”:

“It’s been wild to have this entire journey documented leading into the DAYTONA 500,” Wallace said. “It’s cool to finally see it all come together. I’ve watched a few episodes and it’s awesome.

“It really shows how much preparation is going into my first year racing in the Monster Energy NASCAR Cup Series with Richard Petty Motorsports and the famed ’43.’ This is something a little out of the box that’s great for fans.”

The series follows Wallace in the months and weeks leading up to the 2018 season, including encounters with team owner and NASCAR Hall of Fame driver Richard Petty, Charlotte Hornets rookie Malik Monk and close friend and fellow NASCAR driver Ryan Blaney.

…“Bubba Wallace is a burgeoning superstar in NASCAR, and his story is one that brings inspiration to so many people,” said Evan Parker, NASCAR managing director, content strategy. “With Facebook Watch, we’re thrilled to present Bubba’s journey to the DAYTONA 500 and the highest echelon of our sport in a completely new and innovative way.”

A trailer can be seen on the show page here.

It’s interesting to see Facebook continue their push into sports content centered around big names. As we discussed earlier this month, the idea is to try and get people to think of Facebook as a sports destination, and if there’s enough of an audience that comes on board for this, that could lead them to try and land higher-profile streaming sports rights. And on that front, Behind The Wall is notable as something a little further outside the box rather than another show focusing on the NFL or NBA. The amount of reception it gets may tell Facebook if there’s an audience for NASCAR content on the platform.

There’s merit for NASCAR in trying this too. It should be noted that a Sports Business Journal study last year found NASCAR’s average viewer age rose by nine years from 2006 to 2016, the biggest such change amongst the sports measured, and sat at 58 overall (third-highest in the study, behind only the PGA Tour and ATP Tour tennis events). The sport can definitely use new and younger fans, and it’s facing some name-recognition challenges with many big-name drivers retiring or being pushed out. A Facebook series focused on telling the story of a remarkable new driver might help make some inroads there. We’ll see how this is received.