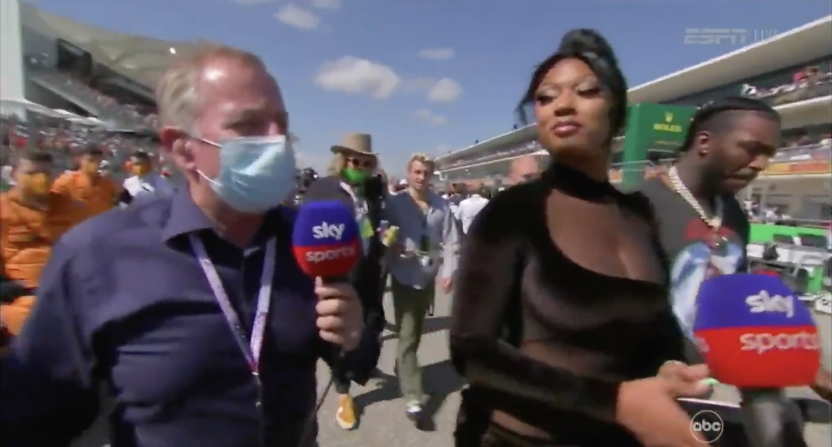 A couple weeks ago, COVID protocols were relaxed and Sky Sports Formula 1 commentator Martin Brundle was allowed to do his “grid walk” before the United States Grand Prix. It’s 10 or so minutes of unrehearsed, unscripted pre-race chatter featuring Brundle and his camera operator as they walk the grid getting whatever interviews they can.

Brundle’s first grid walk in nearly two years was memorable for some infamous reasons. Brundle was first snubbed by Serena Williams but that paled in comparison to his interaction with Megan Thee Stallion. Well, Megan’s entourage because Megan seemed welcoming toward Martin.

As a result, Brundle revealed that there are new rules for celebrity VIP’s who are allowed onto the grid before the race to not have bodyguards and to give a short interview if requested.

Brundle told Sky Sports, “There have been new rules introduced, that any celebrities on the grid must not have bodyguards any longer. It must be the ‘Brundle clause,’ and they’re obliged to talk to me. I sort of like it if they ignore me, to be honest.”

It seems like if Brundle had his way, he wouldn’t interview celebrities at all. He’s a racer, he knows most viewers are watching because of the race, and that’s what he wants to talk about. But interviewing celebrities is part of the job and every once in a while we do get a hilarious moment like Ozzy Osbourne in Canada.

Brundle has a “fan-focused” mindset when it comes to celebrities on the grid because he feels some people are there just because they’re there, have no interest in F1, and knows that fans would kill to be in that position. Brundle once said, “I like to call out some of the celebs that I think are just using the grid a little bit if I’m honest. They don’t really have a passion. I know there are millions of fans at home going ‘I should be on that grid. I’m a massive Formula 1 fan, not them.'”

When it comes to celebrities, their presence at a sporting event has a purpose. For the glitz and glamour of Formula 1, having famous people hanging around the grid shows this is a high-profile event. Having said that, a celebrity who is an invited guest should probably do something if they’re not paying for anything since that would be their payment.

I’m not sure the ‘no bodyguards’ rule is needed because while the grid is restrictive, it’s still a hectic place. And if the celebrity is more comfortable with a bodyguard, let them have one. As long as the bodyguard is aware that if an older short guy with a microphone and camera comes up and wants an interview, to not cast him aside and give him the interview.