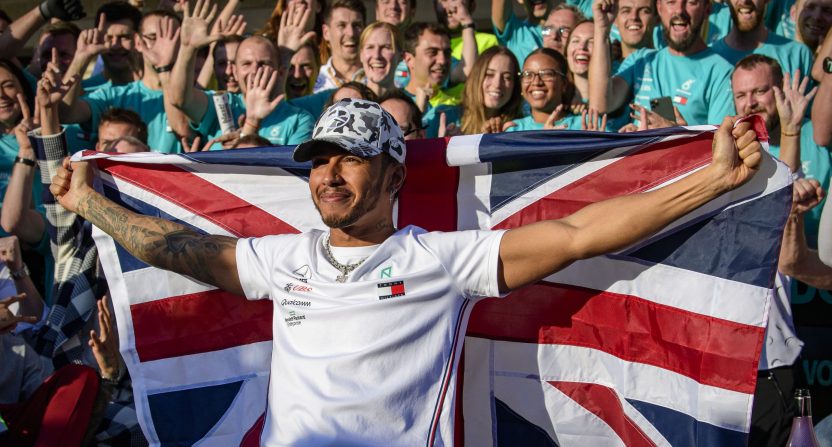 Social media could be a great thing (so I’ve heard), but it’s sometimes devolved into something else. And when it comes to news (or incorrect news) spreading on social media, the quote, “A lie can travel halfway around the world before the truth can get its boots on,” literally applies here.

“Essentially Sports,” a sports site that seems to cover a variety of sports from a fan’s perspective, apologized for a story they wrote that was based on quotes from a parody Twitter account that claimed to be from Aston Martin Red Bull Racing advisor Dr. Helmut Marko. The parody account claimed that Marko said that Lewis Hamilton (seen above celebrating his sixth world title in November 2019), who is currently the only Black driver on the F1 grid, was “distracted” by the Black Lives Matter movement.

Earlier today we published an article containing quotes attributed to Dr Helmut Marko. The quotes attributed to him were incorrect. The source of the information was not ‘RTL’ and instead a parody Twitter account. It was wrong for us to publish the news story without first establishing the veracity of the information. We sincerely apologise to Dr Helmut Marko and to Aston Martin Red Bull Racing.

Dr. Marko has had a history of saying some pretty crazy things, including once admitting that his idea of intentionally infecting drivers with COVID-19 was not well received, but there’s nothing where he actually said anything about Hamilton being distracted.

Before Essentially Sports took down the original post and apologized for their mistake, Hamilton saw the article and posted a scathing response to what he thought was legit quotes from Dr. Marko. Hamilton said he was “quite offended” and “saddened” at Marko’s “comments” and let him know that a distraction for him wasn’t fighting for equality but seeing “fans showing up in black face to taunt my family on race weekends” as well as the treatment he faced all his life due to the color of his skin. Hamilton has since deleted the post but at the time of posting is yet to apologize.

The issue when it comes to Hamilton was that Essentially Sports has 757 Twitter followers so while it’s still bad that they didn’t fact check and post the article, their overall reach is way more limited compared to Hamilton, who has 5.7 million Twitter followers and 16.8 million Instagram followers. And when it comes to any person or company with a sizable social media presence, what’s posted travels insanely quick compared to someone with a few hundred followers. Then that snowballs into Hamilton’s fans going after Red Bull and Dr. Marko for something he never said. All this could happen in the span of a few seconds and spiral out of control, even if this wasn’t something Hamilton intended.

Over the past few weeks, Hamilton has spoken up about Black Lives Matter and even called out his fellow F1 drivers for staying silent about George Floyd’s murder and the ensuing protests throughout the world. After they were called out, about half the grid spoke out and some of them apologized for staying quiet for so long. Hamilton has been praised for his activism and utilizing his platform to get others to join in, but even though what he posted was with the right intentions and it’s more Essentially Sports’ fault for posting the article in the first place, his post was directed at somebody who didn’t deserve the criticism that he ultimately received.

We’ve all been fooled by parody accounts or have posted something on social media from a trusted source that either got fooled themselves or got a story incorrect. It’s infuriating and embarrassing and you feel terrible, but nobody’s perfect. Just let this be a lesson that whether you have a few hundred followers or a few million, always take a minute and do your best to make sure what you post is accurate before posting that yourself. The situation could get away from you almost immediately.